A bright new outbreak on Jupiter

An exciting new outbreak on Jupiter has been reported today by Isao Miyazaki in Japan.  He imaged a new, very bright spot (red arrow in images) which must be the start of a new outbreak of storms in the rapid jetstream on the south edge of the North Temperate Belt (a NTBs jet outbreak).  These are among the most energetic and fast-moving events that occur on Jupiter.

Previous outbreaks in this series occurred in 2007, 2012, and 2016, though only the first was observed thoroughly, as the 2012 and 2016 events took place largely during solar conjunction.  The initial bright plume can be expected to move very rapidly in decreasing longitude: around -5 deg/day in L1, -13 deg/day in L2 or L3.  And there could be other such plume(s) at other longitudes.  Observers are urged to follow this outbreak if possible over the coming days and weeks.

Meanwhile, the BAA Jupiter Section continues to monitor other interesting phenomena and to post regular reports on our web pages, including two in recent days.  One of these (Jupiter in 2020, Report no.5) was a round-up of amateur maps and methane-band images in late July, to support professional observations and to follow up novel wave activity.  The other (Results from Juno: PJ28) described the images from JunoCam on July 25, including updates on the polar polygons.  Anyone interested in Jupiter can find the latest information here. 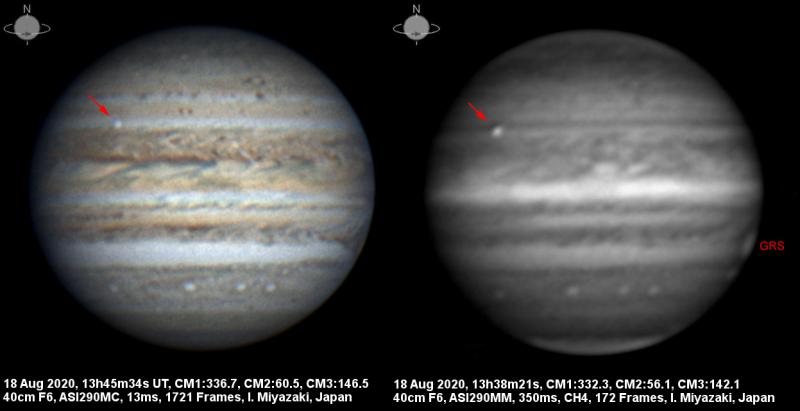