A Good Year for the Perseids 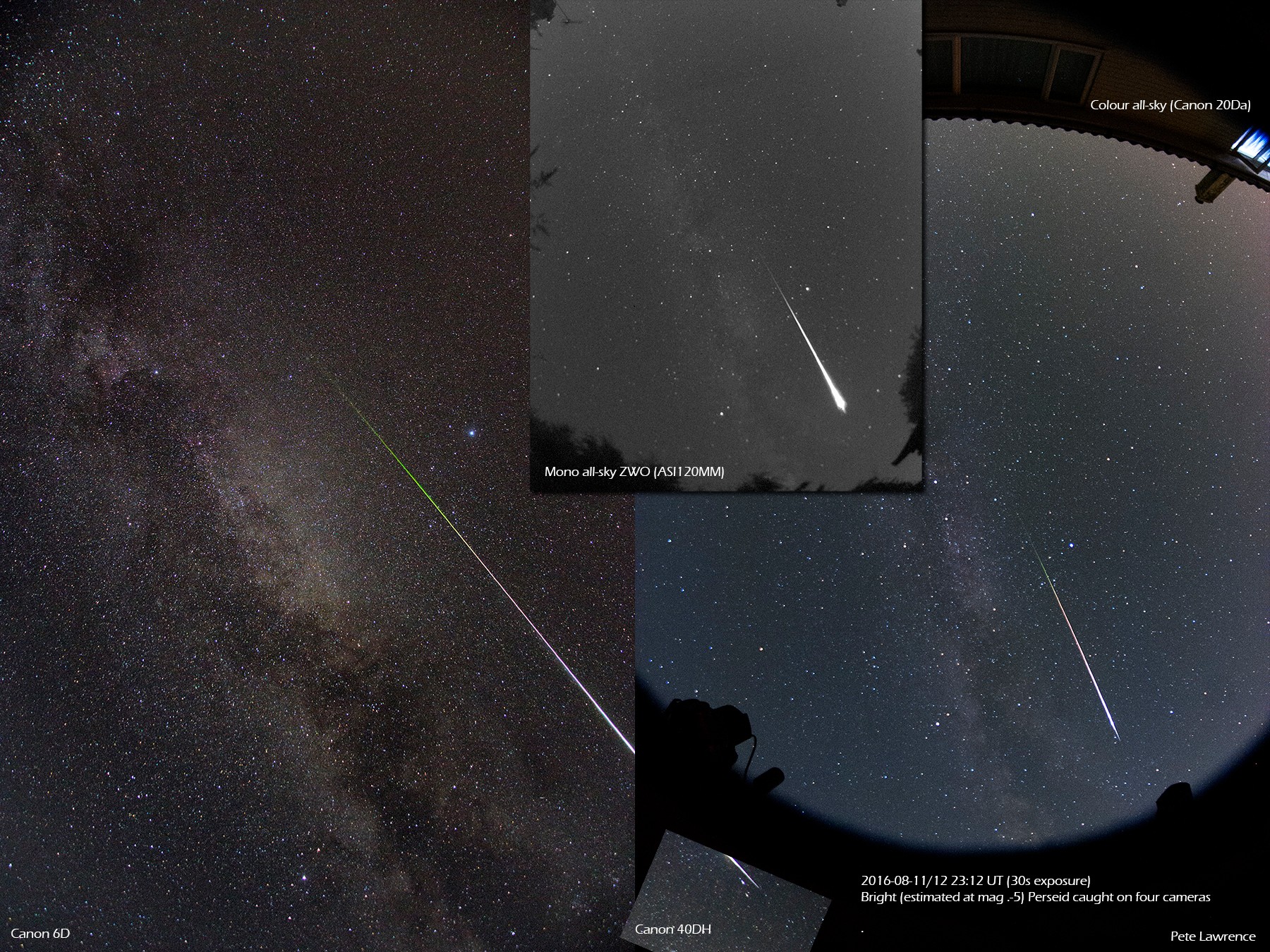 Always the summer’s main attraction for meteor enthusiasts and casual observers alike, the Perseid meteor shower is expected to peak between 19h and 22h UT (20h and 23h BST) on August 12 this year, making the two nights of Wednesday night to Thursday morning (August 11-12) and Thursday night to Friday morning (August 12-13) probably the most productive for observers in the UK since the peak is quite broad. The really good news is that there will be no interference from moonlight this year, with New Moon occurring on August 8 and First Quarter on August 15.

Indeed, the Perseids and the other lesser annual meteor showers that peak in late July and early August are particularly well placed with regard to the Moon this year. The Southern Delta Aquarids, Alpha Capricornids, Kappa Cygnids and the rise to maximum and peak of the Perseids may all be observed under dark skies. Watches carried out any time in early- to mid-August are likely to yield good observed rates this year.

Meteor observing can be carried out by individuals, or by groups of observers working together. The element of teamwork makes meteor observing particularly attractive to local astronomical societies and the Meteor Section of the British Astronomical Association (BAA) welcomes reports from such groups as well as individual observers.

Perseid meteors are detected as early as late July/beginning of August and until about August 21. Indeed, video observers in the NEMETODE group have been recording some nice, bright early Perseids during clear periods since the beginning of August and there is a noticeable ‘uptick’ in the shower’s activity around August 8-9.  Steadily increasing observed rates can be expected in dark skies from this date until the peak, with the best observed rates expected in the early morning hours on August 11-12 and 12-13. It is hoped that, weather permitting, observers will cover shower activity even on nights away from the maximum, for example on the Tuesday night to Wednesday morning (August 10-11) and Friday night to Saturday morning (August 13-14).

Observers watching after midnight on August 11-12 should experience increasing activity towards dawn, as the shower radiant (the region in the sky from which Perseid meteors appear to emanate), at RA 03h 11m, Dec. +58°, near the Double Cluster, on the Perseus-Cassiopeia border, climbs higher in the eastern sky. There should also be good activity as darkness falls on Aug 12-13, although the radiant will be relatively low in the north-east at this time.  Although few in number, Perseids seen when the radiant is low will last longer and travel a much greater distance across the sky than those observed in the early morning hours.  Some of these ‘earth-grazing’ Perseids can be spectacular if they happen to pass more or less overhead.

Observed Perseid rates improve as the radiant altitude increases from 27° at 21h, to 43° at midnight and 66° by 03h.  All else being equal, the best observed rates are found when the Perseid radiant is highest in the sky during the pre-dawn hours. Under cloudless skies, and in a dark viewing site, observers can expect to see between 50 and 70 meteors each hour near the peak. Even in light polluted towns or cities observed rates may still be around ten an hour in the early morning hours when the radiant is high.  It doesn’t matter in which direction you look, because Perseids may be seen in any part of the sky.  Near the radiant the trails will tend to be short, whereas on the other side of the sky the meteors will appear as streaks with long paths.

While watching the Perseid shower this year we would encourage you to contribute useful data to the BAA by simply counting the number of meteors seen during a specific time range and sending your counts to us.  Watches should ideally be of an hour’s duration or longer (in multiples of 30 minutes) because this will tend to even out the varying intervals between individual meteors.  You might see no meteors at all for 10 minutes and then see three in the space of a minute!  Perseids will all appear to originate from the radiant (if you extend their paths backwards) no matter where in the sky you see them. However, some of the meteors you see won’t be Perseids. Several other lesser meteor showers are active at the same time and there are also random ‘sporadic’ meteors, so if you can separate these out from the Perseids that will increase the value of your observations.

It is also important to note the faintest star you can easily see (the so-called stellar limiting magnitude) and whether there are any clouds or natural obstacles which reduce the area of clear sky you can observe.  Visual meteor watches are an excellent means of becoming familiar with the constellations, and are commended to the beginner as a useful introduction to observational astronomy. Even newcomers can obtain results of value.

A naked eye visual meteor watch requires the minimum of equipment, even for more experienced observers. Ideally, one needs to find a dark site away from interfering lights, and recline on a deckchair or similar support so that the sky at 50° altitude can be watched in comfort. Appropriate clothing is essential as it can get quite chilly even on summer nights! An accurate timepiece, a dim red torch, notepad or clipboard with report forms, and several pens and/or pencils are the only other needs. Alternatively, you can record the details of every meteor you see by recording it on your mobile phone and transcribing it later, but make sure it is fully charged before you start.

The BAA’s visual meteor report forms, available as downloads in both pdf and Excel Formats, enable more experienced observers to record the details of each meteor seen. These include: time of appearance (UT); apparent magnitude (brightness); type (shower member, or random, ‘background’ sporadic); constellation in which seen; presence and duration of any persistent train. Other notes may mention flaring or fragmentation in flight, or marked colour. Most shower meteors will be seen if the field of view is directed some 40° in azimuth from the radiant.  When checking to see if a meteor aligns with the Perseid radiant or not, observers should bear in mind the nightly eastwards ‘drift’ of the Perseid radiant due to Earth’s orbital motion. In early August, the radiant is 15 degrees west of its position at maximum (given above), to the north of Andromeda.

The Perseids are well known for the abundance of fast, bright meteors close to their maximum. Perseid meteoroids enter the atmosphere at a velocity of 60 km/sec (~135,000 mph), and the resulting meteors often leave behind persistent ionisation trains. The large numbers of bright events in the five-day interval centred on Perseid maximum makes this an excellent target for digital imaging, considering the lack of interference from moonlight this year.

The considerable prevalence of satellite trails on DSLR images these days means that observers should ideally make a continuous series of very short exposures (15 seconds max.) at high ISO and full aperture to enable the majority of the satellite trails to be detected by being visible on more than one exposure.  DSLR observers should also be alert for dewing of their camera lenses if the equipment is left out overnight.

Enjoy the Perseids this year

Observations in recent years have revealed noticeable variations in Perseid activity from year to year and we shall just have to wait and see what is in store for us in 2021. Meteor observing should be viewed, first and foremost, as a source of enjoyment for the observer(s). Whatever the approach and specific techniques applied, meteor observing can still produce unexpected results, and the only way to make sure you don’t miss out is to go out and observe!