An interesting return of the October Draconid meteors 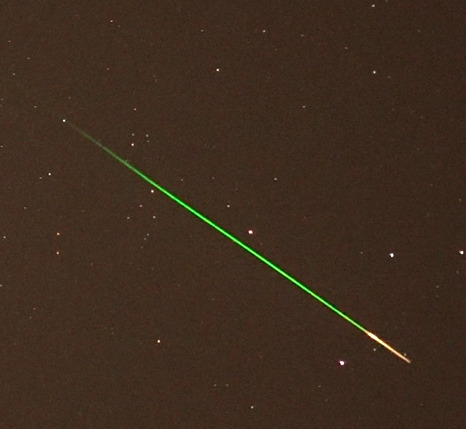 However, modelling of the individual narrow dust trails laid down by the parent comet at successive returns to perihelion shows that no major activity is likely this October, as the trails mostly pass too far from the Earth. Closest approach will be to the 1953 trail at a distance of 0.00249 AU. Unfortunately, this trail is probably only sparsely populated due to the close encounter with the Earth in 1985. Consequently, there may be some low activity from this trail, with ZHR of 10-20 m/h, sometime between 23:00 UT and 00:30 UT on October 8/9 (Monday-Tuesday).

However, unexpected brief outbursts in activity are always possible, so observations are encouraged throughout the night of October 8/9.  The radiant of the shower will be centred on RA 17h 32m, Dec + 56o, not far from the star Nu Draconis in the ‘head’ of Draco. Draconid meteors are typically very slow moving, in marked contrast to members of showers such as the Perseids or Leonids.

With new Moon occurring on October 9, there will be no interference from moonlight this year. Observations will also be of value on the evenings immediately before and after the predicted peak to provide a check on background meteor rates at this time. Let us hope for clear skies everywhere on the evenings of 2018 October 7, 8 and 9, but particularly on October 8/9.

The BAA Meteor Section is seeking the help of all observers to gain an accurate picture of Draconid meteor activity this year. We would welcome any observations of the Draconid meteor shower from individuals or local society groups.  Even simple counts of Draconid and sporadic meteors seen within given time periods will be welcome.  Please send your observations to meteor@britastro.org.

One of the Draconid streams is expected to intersect the location where the Gaia spacecraft is located at L2 so ESA are taking special measures to protect it around October 8/9. This involves turning it so that the sunsheild faces the stream. This will cause some disruption over a few days but the spacecraft will be back to normal shortly afterwards.