This comet is now well above the eastern horizon at around 6am from the UK. It’s not as bright as we had hoped with the latest estimates putting it around mag 6.4 so it is around 1.5 mags fainter than the prediction in our news item from a couple of weeks ago. Despite the fainter magnitude the comet has an interesting shape in images since it shows a long ion tail and a stubby dust trail widely separated in position angle. There is also a short dust tail but this is hard to see since it is projected behind the comet from our point of view. 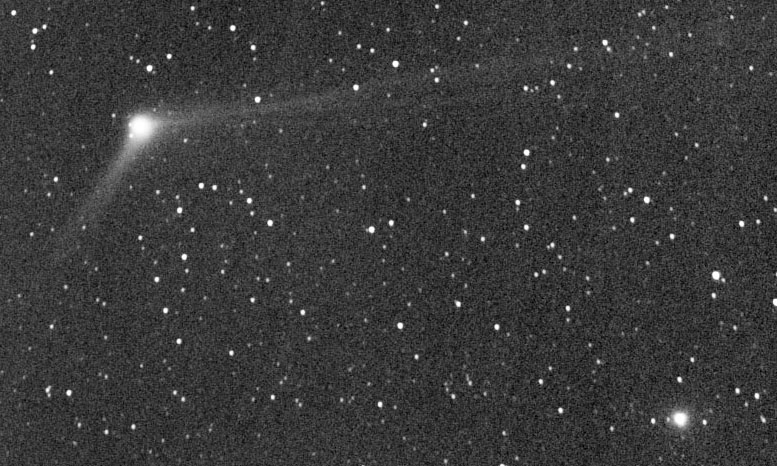 As with all comets you need to take advantage of gaps in the cloud to get a good view and we were lucky in the east last Friday morning with a forecast clearing after rain which occurred at just the right time. Observers from across East Anglia and Essex got a good view. The next opportunity from the south looks as if it could be Wednesday morning but, after that the Moon will move out of the way giving us a clear run for the next couple of weeks.

The comet is also worth looking at visually. Andrew Robertson in Norfolk sent me the following after observing it on Friday morning:

I got my first visual view this morning and made a sketch through my 12″ Mewlon (will post to you separately). I could see it easily in my 4″ refractor but have to confess that I couldn’t see it in my wide field 8.5 x 50 bins – you have younger eyes than me Nick 🙂 Mind you that nearby moon and a fairly close Venus wasn’t helping. Visually through the 12″ I could see a longish thin tail and a very tenuous stubby tail which seemed almost like an extension of the coma. There was a stellar nucleus. Sketched with a 40mm Pentax e/p giving x90 and a 0.7 deg FOV, detail confirmed with 27mm Pan giving x135 and 0.5 deg FOV. I estimated the longer tail to be about 10′ long.

Best of luck observing this comet. Please let us know if you are succesful.