Update on 2018 July 22 – Just after I wrote this the comet began to fade. At present we don’t know whether this is the beginning of the end or whether it will outburst again. The only way that we will know is to keep it under observation for as long as possible as it heads to perihelion.

C/2017 S3 PanSTARRS continues to brighten and it doesn’t show any sign of imminent disruption so this does have the potential to become a fairly bright object over the next few weeks as it heads towards perihelion (q=0.21) on August 15. Observers are reporting that the comet is now 7th magnitude with a large coma and a  faint tail which stretches around a degree to the northwest. The current COBS lightcurve is here. The brightening does appear to have been sustained although you should take the predicted magnitude fit on that page with a large grain of salt since this is a dynamically new comet and we don’t really know what it will do as it approaches the Sun.

It is really important to keep this object under observation for as long as possible. The observing circumstances are getting more difficult as the elongation reduces so you will need a good northeastern horizon but if it does get bright binoculars or a portable imaging setup should be sufficient to get good data. The comet is just entering Auriga so it is almost directly below the pole when it gets dark but the best time to see it is in the early morning sky just before the sky begins to brighten. A chart for the next few weeks is here (2017s3.pdf).

Observing circumstances after perihelion are poor but Worachate Boonplod has pointed out that it should appear in the SOHO C3 FoV from August 14. It should also be visible in the STEREO HI1-A FoV from July 31.

The image below was taken on July 20 and shows that the comet currently has a coma diameter of around 7 arcmin. Further images are available in the Comet Section archive here. 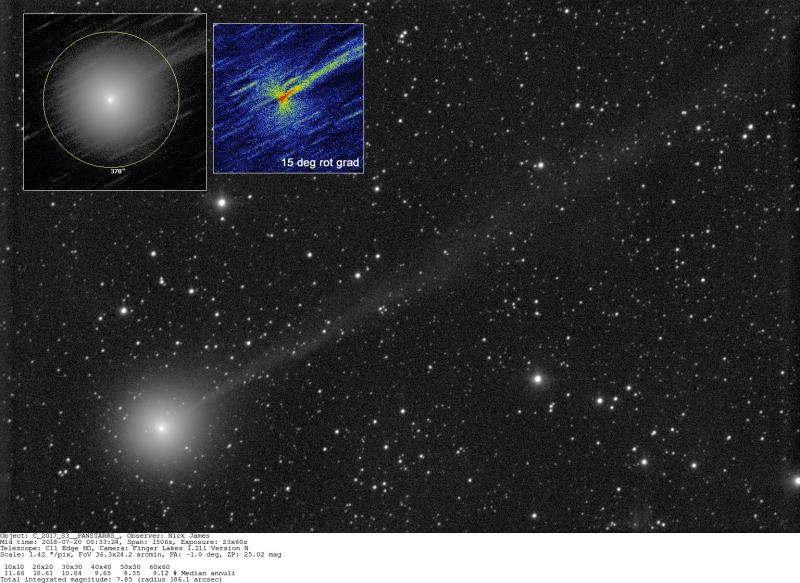