C/2017 T2 (PANSTARRS) was discovered at 20th magnitude in 2017 September when it was it was 9.3 au from the Sun. It is heading for a perihelion at q=1.6 au in early 2020 May. The comet is currently in conjunction but it was apparently brightening rapidly when last seen in April. It should become visible from the UK in mid July very low in the morning sky as it moves slowly NE in Taurus. By then it will be 3.8 au from the Sun and 4.5 au from the Earth. It moves higher in the sky and will be visible throughout the autumn, winter and spring as a circumpolar object and it remains well placed in Ursa Major at perihelion (see this chart). Magnitude estimates through the late summer and autumn should help to constrain the lightcurve.

An analysis by Jonathan Shankin on limited data suggests it could be anywhere between 9th or 2nd magnitude by the end of the year. Definitely a comet to watch when it returns from behind the Sun. 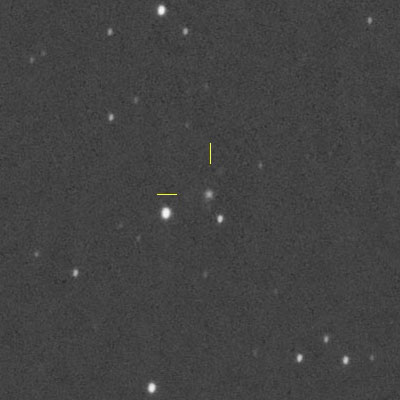 C/2017 T2 imaged by Peter Carson on 2019 January 28.9. At that time it was around 16th magnitude. Further images are available in the section archive.