Comet 21P/Giacobini-Zinner will brighten through the summer 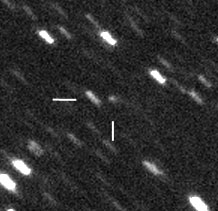 This comet was discovered by Giacobini in 1900 and recovered by Zinner in 1913 and it has an orbital period of 6.6 years. The return in 2018 is a particularly good one with the comet coming to within 60 million km of the Earth on September 11. It is also particularly well positioned for observation from the northern hemisphere.

Comet 21P is currently (April) a 17th magnitude object in the morning sky. It starts the summer as a 13th magnitude object moving north in Cygnus and it passes within a degree of the North America Nebula (NGC7000) on June 21. By early August it should have reached 8th magnitude as it moves through Cassiopeia and at the end of the month it may attain naked eye visibility as it enters Auriga. Throughout September it should maintain 6th magnitude as it moves rapidly southwards, crossing directly over the open cluster M35 in Gemini on September 15. From the UK the comet will be lost in the dawn sky in late October as it fades rapidly and moves away from the Sun and the Earth.

A chart is available here: 21p.pdf.