This comet made a very close approach to the Earth on March 22 when it was in the far south. It is now moving away from the Earth and moving gradually north in the sky. 252P/LINEAR is currently in Ophiuchus and it will cross the celestial equator on April 9th. It is very diffuse but has been much brighter than expected and it should be visible in binoculars from a dark site. Many imagers, some of them from the UK, have been obtaining excellent images and a good selection are in the Comet Section archive for 252P here.

The comet is best seen just before dawn when it is almost due south and around 35 degress above the horizon as seen from the southern UK. Current visual estimates from dark sites put it at around 6th magnitude but the surface brightness is very low since the apparent coma diameter is huge. Some observers are reporting a coma diameter of well over a degree. This will make the comet difficult to spot from light-polluted sites but it is a good target for imagers as the picture below from Peter Carson taken near Southend, Essex shows. 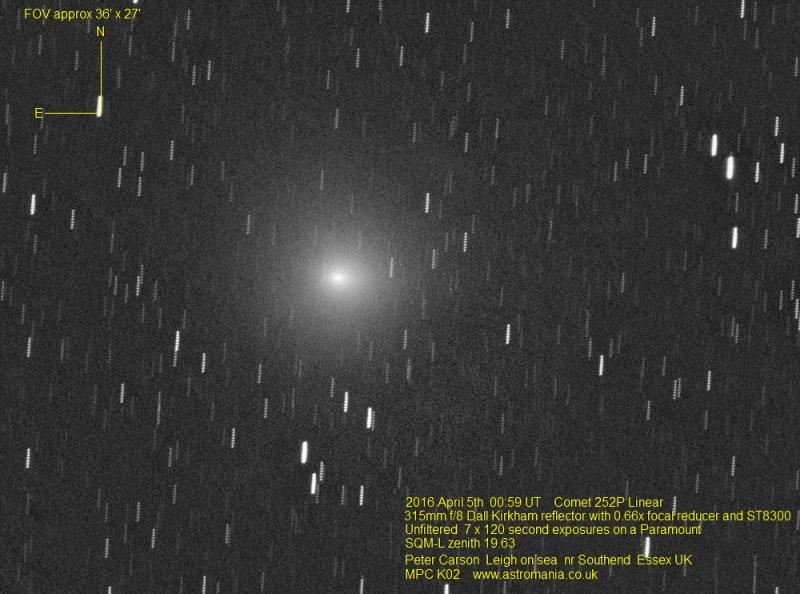 Over the next few weeks the comet will move slowly north but it will probably fade quite rapidly so take the chance now to find it while the Moon is out of the way. You can generate a chart showing the location of the comet using the Heaven’s Above website.