Comet of the month – 4P/Faye

This month’s comet, 4P/Faye, comes to perihelion on 2021 September 8. In late July it was a 12th magnitude object in the morning sky in Aries. Through the rest of the year it will move slowly through Taurus ending the year in Orion and Monoceros. It will probably reach magnitude 11 at perihelion and it is well placed for observation from the northern hemisphere through the autumn (see 4p.pdf). It may not be very bright but it has an interesting history and, as its name implies, it was only the fourth periodic comet to have its orbit computed after 1P/Halley, 2P/Encke and the, now defunct, 3D/Biela 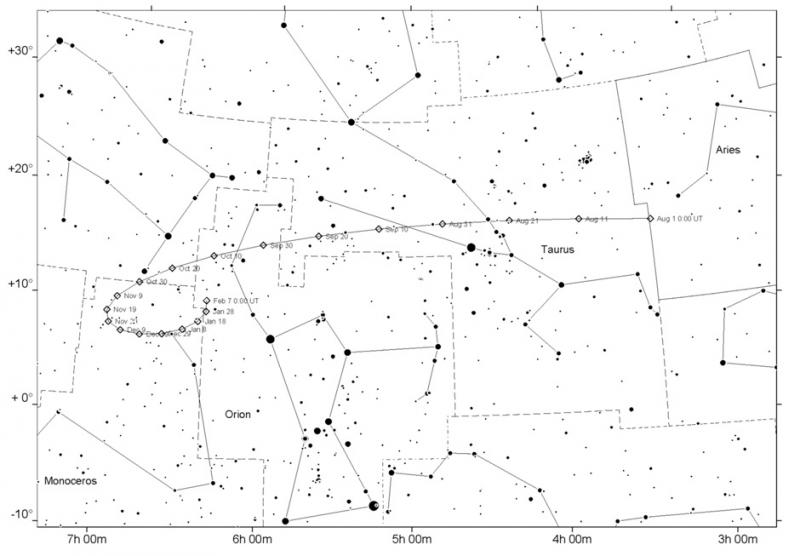 The comet was discovered way back in 1843 by Harve Faye at the Royal Observatory in Paris. On November 23 he noted a fuzzy object with a 4′ tail near to gamma Orionis. Two days later, on the morning of November 25, he confirmed his discovery. The famously litigious Sir James South saw it on November 30 from Kensington and commented that it was bright enough to see in a 7cm refractor. Interestingly Cometography reports that South also observed it with a “30.2 cm refractor”. South owned a 12-inch lens made by the French optician Cauchoix but, as far as I know, it was not mounted at the time. He had smashed up the Troughton and Simms mounting in a fit of anger following a very public disagreement which is well documented in Michael Hoskin’s JHA paper and shown in the entertaining sketch below. Perhaps he was using the Northumberland 12-inch at Cambridge? This also had a Cauchoix lens. South’s Cauchoix lens eventually ended up in the Grubb refractor at Dunsink. The comet was last seen on 1844 April 10 when Struve could just detect it with a 38-cm refractor.

In early 1844 Thomas Henderson in Edinburgh had computed an orbit which showed that the comet was following an elliptical path with a period of 7.4 years. A search to recover the comet started and, on 1850 November 28, it was recovered by Challis using the 12-inch Northumberland refractor at Cambridge based on a prediction by Le Verrier. This was four years after Le Verrier had predicted the position of the new planet that would be known as Neptune. In that case of course, Challis lost out to Galle in an episode that led to one of our, not infrequent, spats with France. The geometry of the 1850/51 return was not particularly good but the comet was followed through to 1851 March 5.

With the exception of the really poor returns of 1903 and 1918 the comet has been seen at every return since its discovery. Every 59.3 years (5 Jupiter orbits and 8 orbits of the comet) 4P has a close encounter with Jupiter and this changes its orbit significantly. The last such encounter was in 2018. The perihelion distance is gradually reducing (from 1.7 au in 1843 to 1.6 au now) but this is compensated by gradually increasing eccentricity since the period is locked in an 8:5 Jupiter resonance (11.862 * 5/8 = 7.413 years). The plots show the comet’s perihelion distance and period based on integrating the current elements forward and backward. The periodic Jupiter encounters are clear. 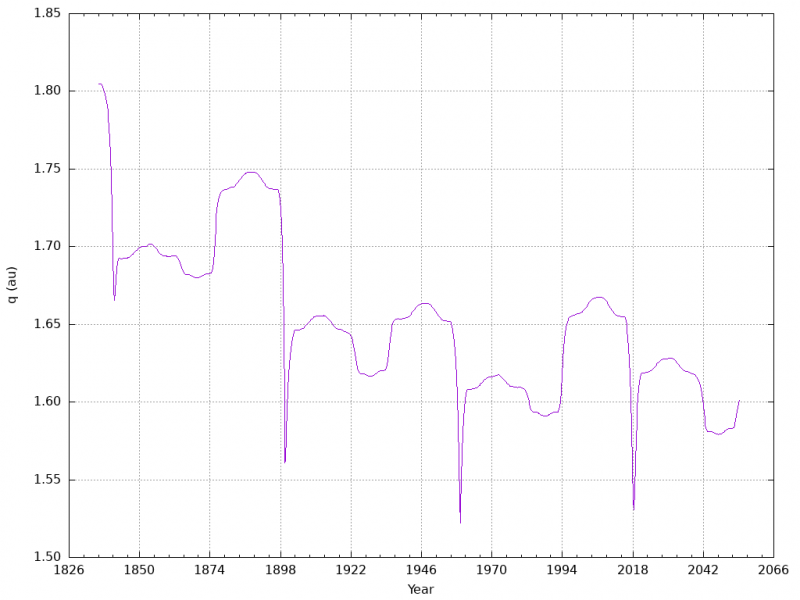 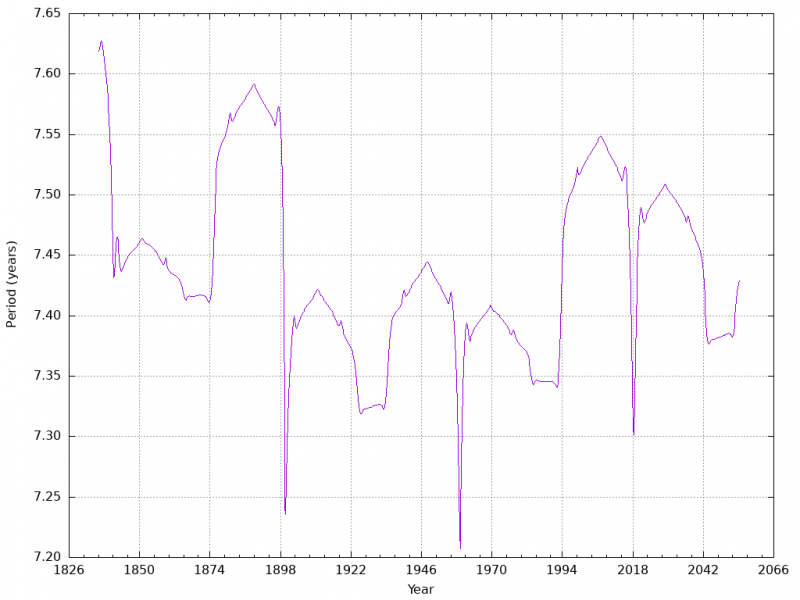 A lightcurve from COBS showing the past three returns shows a variation in the peak brightness but this is due to the observing geometry. Some authors suggest that the absolute magnitude of the comet is declining but analysis by Jonathan Shanklin shows that it reaches a similar magnitude at all favourable apparitions. 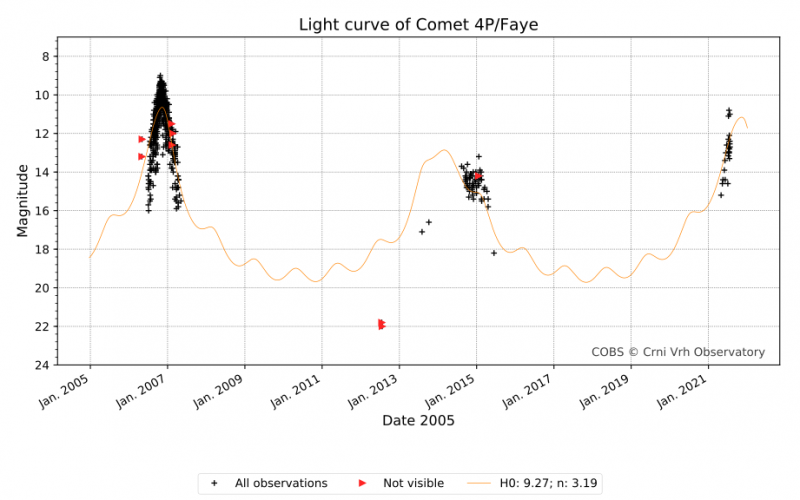 The BAA image archive for this comet is here. The first image in our archive is a photograph (on 2415) by Martin Mobberley taken on 1991 November 9 using his 0.36-m, f/5 Newtonian. We have many images from the 2006 and 2013 returns. The first image from the 2021 return was taken in March by Nirmal Paul on March 27. Recent images, such as this one by Peter Carson taken on July 21 show a nice tail. 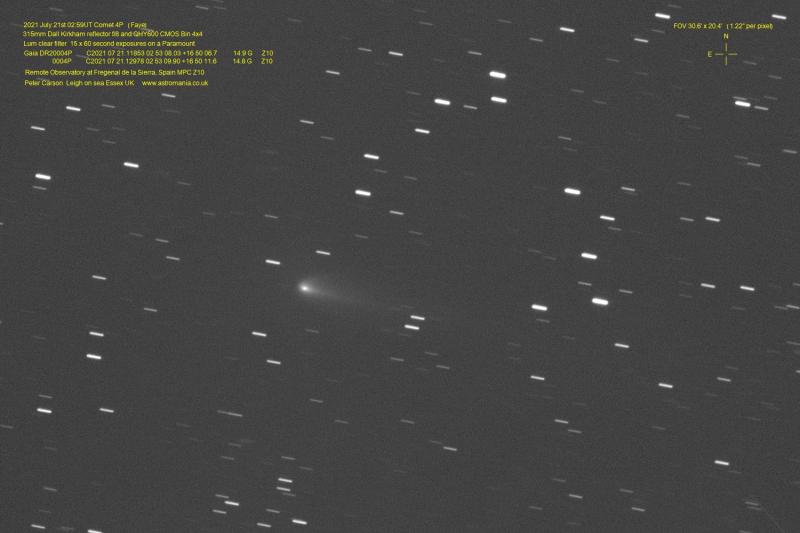 It may not be bright but it does have a lot of history and so it is well worth observing. Please send any observations to cometobs@britastro.org.