Less than a month after the bright fireball event that led to the recovery of numerous meteorites in Gloucestershire (see here) we have had another major event which may have led to a meteorite fall in Hampshire. This occurred at 14:53 on Saturday, March 20 but, unfortunately, unlike the Winchcombe fireball which took place at night and which was recorded on multiple video cameras this latest event took place during the daytime and hardly anyone saw it since cloud covered most of southern England and Wales at the time. This means that the track and the possible fall area is much less precisely defined than it was with Winchcombe. 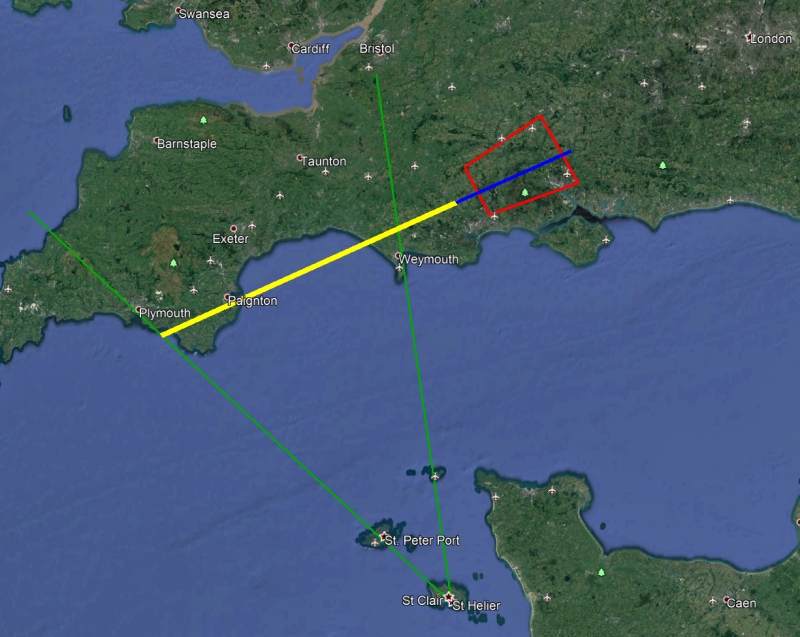 The first indication that a major event had occurred was multiple reports of sonic booms heard by people under the cloud cover. These were recorded on a number of CCTV systems and by a fibre optic distributed audio sensing array operated by Optasense in Dorset. The sky was clear in Jersey and we also have two records of the event from there. An extremely valuable dashcam video from St. Helier shows the entire event in a clear sky and a still taken on an iPhone shows the bright fireball and its train against the blue daylight sky. 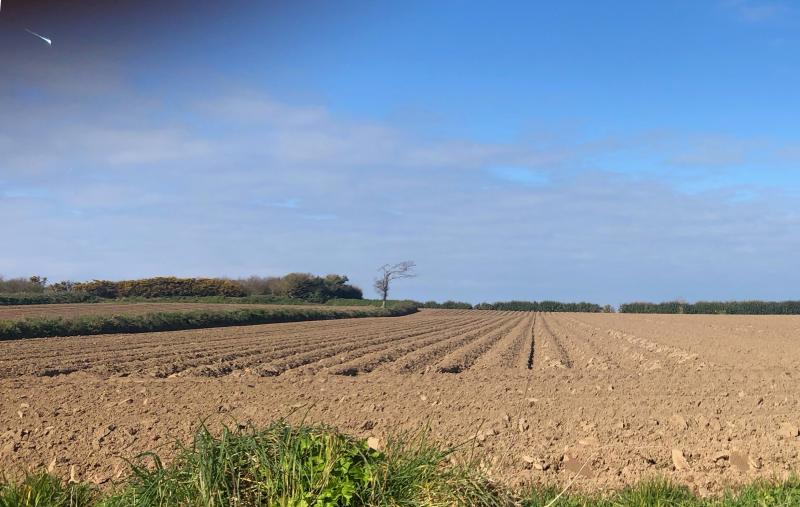 Jim Rowe of UKFALL has today issued the following press release describing the analysis that we have managed to perform with the limited data we have.  If you are in the region where we believe that the fall occurred please look out for any unusual objects.

On Saturday 20th March a rare daytime fireball was seen from Jersey, then two minutes later a sonic boom was heard widely across Dorset.  Researchers now believe that the fireball may have dropped a meteorite in or near the Northern part of the New Forest in Hampshire a few minutes later.

Dr John Mason of the British Astronomical Association’s Meteor Section, who analysed the car dashcam footage from Jersey, said “in the video, the meteor is first visible in the direction of Plymouth and its altitude is around 90km.  Four point six (4.6) seconds later it’s visible in the direction of Dorchester at an altitude of about 38km, then it disappears out of the frame of view”.

Nick James of the NEMETODE meteor network, who worked with Dr Mason on the analysis, said “we were also really lucky to have two good measurements of the timing of the sonic boom, along with many reports of its direction.  Combined with the dashcam footage, we have been able to estimate its path across Dorset.  We’ll keep refining the calculations, but we now know generally what happened.”

UKFAll received many sonic boom reports, with the most intense being from Dorchester.  Sound took two minutes to reach ground level and was recorded with accurate timing by OptaSense, a Fibre Optic sensing company based near Wool in Dorset and also at the East Fleet Touring Caravan park near Weymouth.  Dr Mason continued “triangulating using sonic boom reports isn’t something we’ve done before, but we’ve been lucky with our data this time so have quite a good idea of where this meteoroid went”.

Dr Ashley King of the Natural History Museum commented that “it’s a pity there was thick cloud over Dorset at the time.  Otherwise it would have been bright and highly visible going overhead at very high speed, followed two minutes later by the sonic boom.  We’d also know exactly where to find this rock.  At the moment we can only give rough guidance, that there could be a meteorite on the ground somewhere between Verwood in Dorset and Romsey in Hampshire or a few miles either side of a line between them, though we hope to refine this a bit in a week or so.”

An EUMETSET weather satellite recorded a flash, seemingly over the Bristol Channel, at the same time, as reported by the astronomer and science journalist Will Gater. Will Gater commented that “after some great work by Dr Simon Proud at the University of Oxford and the National Centre for Earth Observation, we’ve established that the bright feature in the satellite view would’ve in fact occurred quite a bit south of where it appears in the picture, due to the satellite’s viewpoint and the high altitude of the meteor.” Once you make allowance for this, the apparent position moves south and east by about 85km, which is broadly consistent with the meteor’s path calculated by NEMETODE. 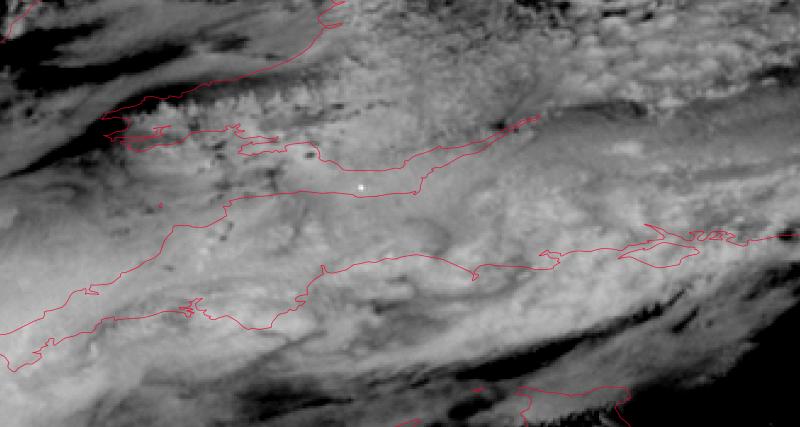 The fireball image displaced by its altitude above the ground to appear just off the north Somerset coast near Minehead. image credit Simon Proud/NCEO/EUMETSAT.

Dr Luke Daly of the University of Glasgow said “the video recording tells us that its speed was faster than last month’s Winchcombe meteorite, but it fragmented less so it’s probably less brittle than the Winchcombe meteorite.  However, like Winchcombe we know it came in way too fast to be human-made ‘space junk’.

Advice from Dr Katherine Joy of the University of Manchester is – “if you do find a meteorite on the ground, ideally photograph it in place, note the location using your phone GPS, don’t touch it with a magnet, and, if you can, avoid touching it with your hands.  Please do exactly what the Wilcock family did so brilliantly in Winchcombe, and pick it up in a clean bag or clean aluminium foil if possible.”

UKFAll asked people not to breach COVID-19 lockdown restrictions to look for the meteorite.  “If you find a piece while you’re out exercising, on your farm or a road, please let us know.  But don’t go hunting for it.”

If you have a photo or video or a recording of the sonic boom of this event please send it to the Meteor Section at meteor@britastro.org