This 4-minute video follows the changes in Gyulbudaghian’s Variable Nebula over 11 years between March 2010 and April 2021. Images were taken on average every 2 weeks over this period, more frequently at the start and less often more recently. Each image is a stack of 20 – 30 one-minute exposures taken with a 0.35m SCT, SXVR-H9 CCD camera and Rc photometric filter. The same equipment and comparison stars were used throughout to maintain consistency. In making the video, small displacements and rotations between images were removed with the aid of Python routines for astronomical image processing. The sky background level, which changes from image to image because of varying atmospheric conditions and moonlight, has been adjusted by hand to make it as consistent as possible and the worst cases of cosmic rays and uncorrected hot pixels have been removed.

PV Cephei is a Herbig Ae star, a relatively massive young star, less than a million years old, which is embedded in a dense molecular cloud. It is still forming by accreting material from a rotating disc which surrounds the star and is almost edge-on to our line of sight. This accretion process often creates a strong magnetic field in a new star which in turn drives bipolar outflows and jets along the magnetic axes of the star. In the case of PV Cep one of these outflows from the star is believed to have cleared a conical cavity out of the molecular cloud and light from the star is illuminating the inside of this cavity creating the nebula we see.

The accretion process from the disc onto the star is irregular causing apparently random brightening and fading of the star on a timescale of months and years. Clouds of gas and dust close to the star and the inner edge of the accretion disc may also occasionally block or dim light from the star. It is probable that both these processes are contributing to the variations we see in the light from the star. These variations also alter illumination of the molecular cloud and cause the changes we see in the visibility of the nebula.

I first started observing this field after a BAA Deep Sky Section meeting in March 2010. Being primarily a variable star observer, I was interested to see if I could detect a connection between changes in the brightness of PV Cep and the nebula. Initially there did appear to be a correlation as the nebula was brightening and fading roughly in step with changes in PV Cep, only slightly delayed. This delay was approximately consistent with the light travel time from the star to the adjacent section of the nebula, as would be expected if the star was illuminating the nebula. As the star continued to brighten, the nebula reached a point where it did not brighten further and stayed at this level for several years. A rapid fade of the star in early 2017 was picked up and followed by the nebula, again with a slight delay. In 2020, the star unexpectedly and suddenly faded by 2 magnitudes to its faintest level in the previous 10 years and the nebula duly followed shortly afterward before both recovered. The star has since shown another rapid fade. The following light curves show the variations of PV Cep and of the nebula over the past 11 years. The brightness of the nebula has been greatly increased so it can be plotted on the same graph. 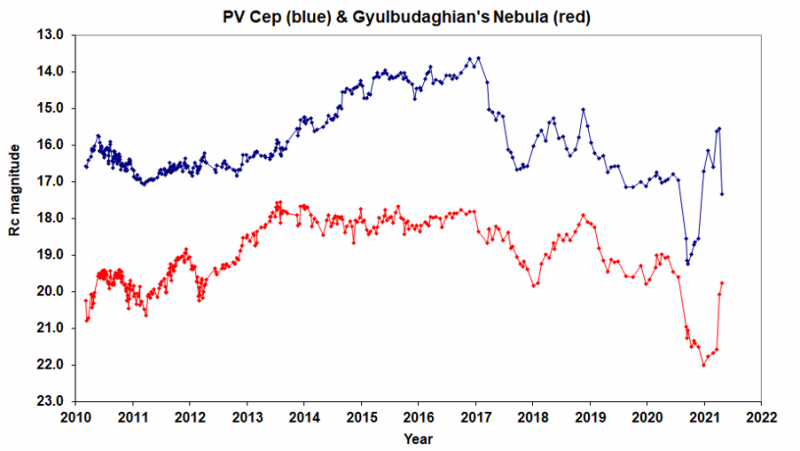