Juno back on track with successful perijove-3

NASA’s Juno spacecraft, in orbit around Jupiter, is now beginning its proper mission, with all seven active instruments having performed well at the third orbital close approach (perijove-3) last Sunday, 2016 Dec.11.  Juno passed 4150 km above the cloud tops at a speed of 57.8 km/s relative to the planet.

Seven of the eight science instruments collected data.  Mission managers decided not to collect data with JIRAM (the Jovian Infrared Auroral mapper), to allow more time to prepare a patch for the onboard software that processes JIRAM’s data. This is to avoid a repeat of the ‘safing event’ that occurred at perijove-2, and it is is expected to be installed in time for JIRAM to operate at perijove-4 on 2017 Feb. 2.

Juno still has an orbital period of 53 days, rather than the 14 days that was originally intended, because of the problem with sticky valves that prevented the main engine burn at perijove-2. The spacecraft team continues to weigh its options regarding changing orbital period.  Juno can carry out its full mission in its present orbit, but it will take longer than planned. For now, it will remain in this orbit at least until the summer, with perijoves on 2017 Feb.2, March 27, May 19, and July 11.

The JunoCam images from perijove-3 have today been released on the JunoCam Image Processing web page.  There are 21 colour images, 12 methane-band images, and 5 long-exposure red-light images of the poles.  The JunoCam team have improved the exposures and image quality, and they obtained nearly complete coverage in latitude, including important targets in the SEB (the turbulent area following the Great Red Spot), the NTB (now turning orange as the Revival proceeds), and – fortuitously – NN-LRS-1, the third largest red oval on the planet.

Below is a quickly processed image of the south polar region.  At both poles, the images confirm the novel features which JunoCam discovered at perijove-1: high-altitude haze streaks at the terminator, and a cluster of cyclones around the pole. Over the coming weeks, processed and annotated versions of the images will be posted on the web pages of JunoCam (Image Processing) and the BAA Jupiter Section (Results from Juno). 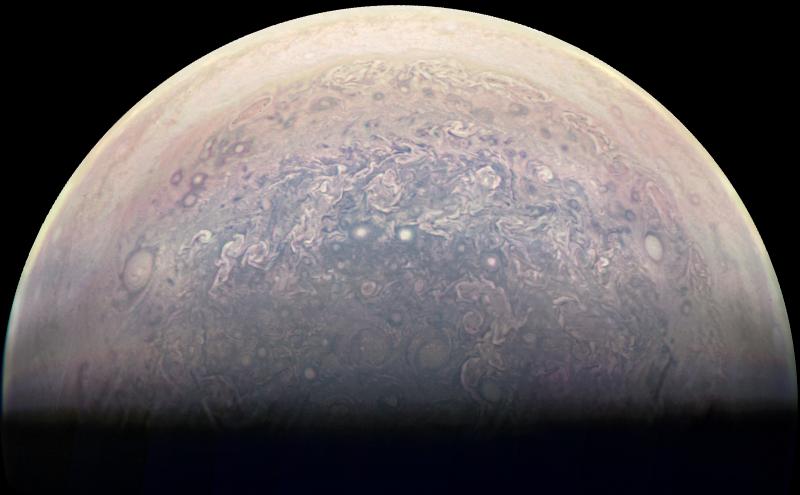