Whether Jupiter’s jet streams are shallow or deep has long been a major puzzle. In the March 8 edition of Nature, in addition to the report on the polar cyclones, three papers* revealed early results from the Juno gravity-mapping project.  They show clearly that the major jets extend deep, down to about 3000 km.  Below that, the planet appears to rotate like a solid body.  The NASA press release is here:

The fit does not extend to higher latitudes where the visible jets are more closely spaced, because these studies only analyse asymmetric gravity variations up to wavenumber 9, from just two perijoves (PJ3 and PJ6).  As the mission gathers more data, it will be possible to analyse higher wavenumbers which will increase the resolution and reveal higher-latitude variations.

The depth of 3000 km is only 4% of the radius of the planet, and becomes shallower at higher latitudes (shown as the outer blue layer on the diagram). But according to the Nature papers, ‘rigid rotation’ was expected below this level**, because below 3000 km, although the planet (being mainly hydrogen, though under enormous pressure) is still fluid, it becomes electrically conducting, so the planet’s magnetic field would inhibit rapid flows.  (Much slower flows should exist down there because that is supposed to be how the magnetic field is sustained. Hopefully Juno will tell us something about that in due course.) 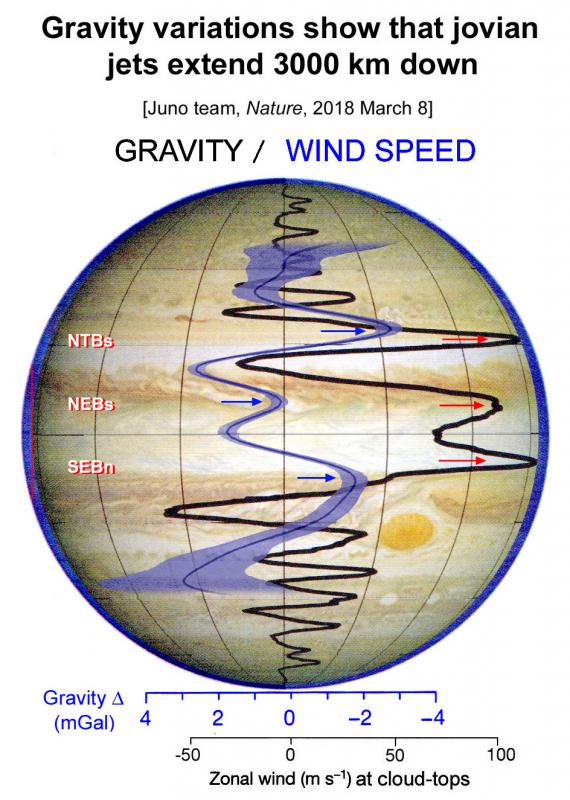