Jupiter at Juno’s perijove-2: The agony and the ecstasy

On Weds. Oct.19, the Juno spacecraft failed to return any data at its second perijove.  But at about the same time, observing from Hawaii, Dr Glenn Orton discovered a spectacular new outbreak on Jupiter which fulfils a prediction made by the BAA Jupiter Section early last year.  A discovery to compensate for the loss of Juno’s observations!

Juno was initially intended to do a main engine burn at perijove-2 to reduce its orbital period, but this was cancelled a few days earlier because of a malfunctioning valve. Instead, the spacecraft was programmed to perform a full set of scientific observations as at perijove-1.  This would have included good image coverage while the planet is too close to the Sun for good ground-based imaging. However, 13 hours before perijove, the spacecraft systems registered some anomaly and ‘went into safe mode’ – i.e. shut everything down, so all observations were lost. Although the spacecraft is being recovered, the future schedule of the mission will not be decided until the causes of both anomalies have been determined.

But around the time of perijove, Dr Glenn Orton was obtaining infrared images in daylight with the NASA-IRTF telescope on Hawaii – and noticed two spectacular bright spots which constitute a new outbreak on the NTBs jetstream. These outbreaks on Jupiter’s fastest jet appear rarely, and suddenly, and are among the planet’s most energetic weather phenomena.  The last previous outbreaks occurred in 2007 and 2012.

The present outbreak was predicted in our ‘Three-year weather forecast for Jupiter’, posted early last year as Report no.5 at:

In Orton’s images on Oct.19, there were two methane-bright spots plus additional disturbance covering >110 deg of longitude altogether.  It is not yet clear whether there are also outbreaks at other longitudes.  The bright spots will move at around -13 degrees per day in System II or III longitude.  They may not last for long; in 2007 they lasted for about 2 months.

The NTBs jet outbreak may have been recorded in distant images taken by Juno before the shut-down; these will be examined when they have been down-loaded to Earth.  In the coming weeks, many professional ground-based observations have been planned in support of the original Juno mission, so hopefully these will go ahead and provide unprecedented coverage of the outbreak. Also, of course, amateur images of this outbreak will be very important.  Observers in low northern latitudes and the tropics are best placed to view the planet in the dawn sky now. 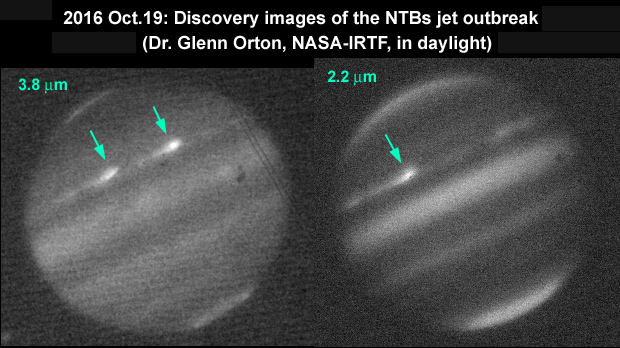