While we are all awestruck by the first “deep sky” images from the James Webb Space Telescope, it has also taken some test images of Jupiter in the near-infrared.  Images were taken by the NIRCam on June 28 (released without much publicity) and on July 27 (available in public raw data), and Lucca Viola in Brazil has produced beautifully processed versions of some at 2.12 microns  (contrast-adjusted and sharpened).  This is a wavelength with strong methane and hydrogen absorption so the bright areas are high-level hazes or clouds. 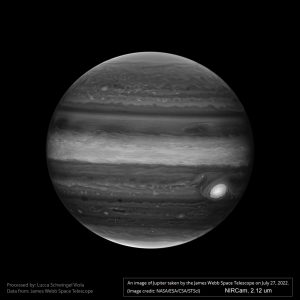