Jupiter’s polar polygons: Clusters of cyclones around the poles

The Juno spacecraft orbiting Jupiter has discovered that cyclones around the planet’s poles are tightly packed into remarkable polygonal patterns.  At the south pole, five cyclones form a pentagon around a central cyclone; at the north pole, eight cyclones form a modified octagon or ‘double square’ around a central one.  These patterns, discovered by the JunoCam and JIRAM instruments, are disclosed in a paper published today in ‘Nature’*, and we present more details and animations from the JunoCam observations in a report posted today on the BAA Jupiter Section web pages:

The spacecraft’s camera, JunoCam, has been viewing the circumpolar cyclones (CPCs) since the first close orbital passage (perijove), but as it can only view the side that is illuminated as it flies over each pole, the polygonal patterns only became clear over the first few perijoves.  In contrast, JIRAM (the Jovian Infrared Auroral Mapper) views not reflected sunlight, but thermal infrared emission at 5 microns wavelength, and so it recorded the entire polar regions at perijove-4, and large parts at perijove-5.  Together, the two instruments have produced complete views of the polar polygons and their circulations.

The north polar CPCs have diameters of 5200-7000 km, and the eight contiguous ones in the octagon are separated from the central cyclone by a narrow chaotic zone with westward flow and some vortices.  The central cyclone, which can only be viewed by JIRAM as it is currently in darkness, is centred only ~0.5º latitude off the true pole. The octagon of CPCs around it has not changed substantially in over a year, with only limited swings to and fro around the pole.

The south polar CPCs have diameters ranging from ~6400-8200 km, and the five forming the pentagon are mostly in contact with each other and with the central one.  But the pentagon is not entirely symmetrical. It is approximately centred on the central cyclone, whose centre is offset from the pole by 1.0º to 2.5º latitude, and the JunoCam images show that this offset has varied cyclically.  On the side furthest from the pole, there is a gap between two cyclones in the pentagon, and this gap grew larger over the first eight perijoves; it has now shrunk again.

The wind speeds within the CPCs, measured independently from JunoCam and JIRAM images, are mostly about 200-350 km/hr at a radius of 1500 km.  Closer to the centres, JunoCam measurements show that some of them have even faster speeds, exceeding 450 km/hr near the centre of the south polar cyclone.   So these cyclones are similar to terrestrial hurricanes in wind speeds, or even faster, and they are several times larger.

These patterns are different in nature from the famous north polar hexagon on Saturn, which is a kinked jet-stream surrounding a single giant cyclone. In contrast, each pole on Jupiter has a polygonal cluster of cyclones, which are are remarkably stable.  They have persisted with little change over the first eleven perijoves, despite the furious winds which blow within them, and the buffetting from the chaotic, rapidly changing storm systems around them.  It is not yet clear theoretically how these polygons can be stable, but they seem to be real-world examples of patterns called ‘vortex crystals’ which were previously known only from laboratory modelling. 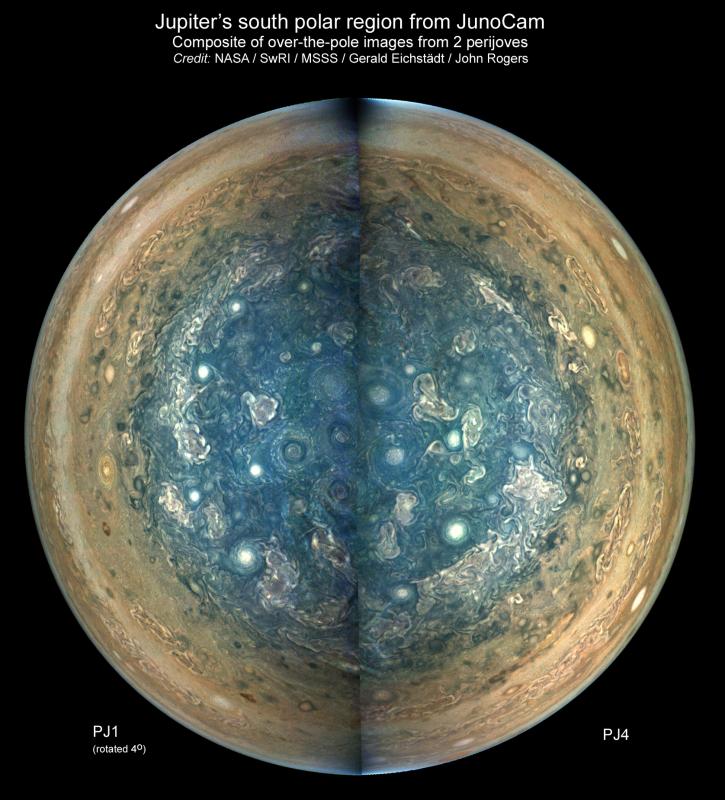 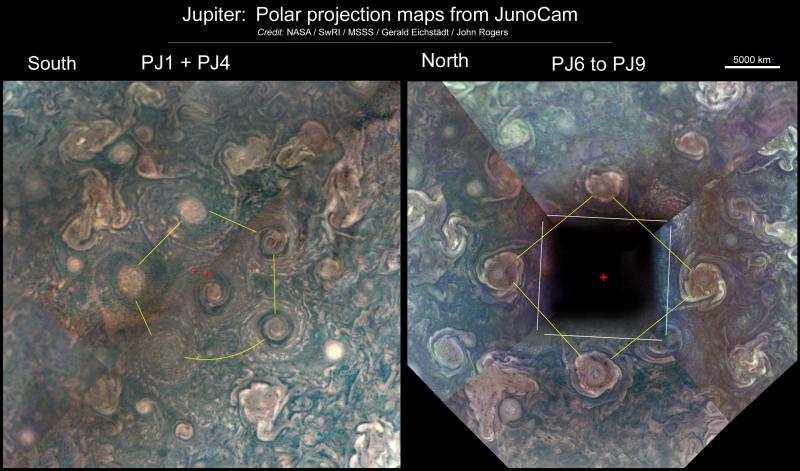 Links to the full-size images:   News-Fig0_Polar-polygons.jpg