The spring evening elongation of Mercury is often the best-observed for northern hemisphere observers, and 2017 proved no exception. Reaching greatest elongation east on April 1, Mercury was captured by the cameras of several observers. In the figure we show the work of three of these. It was pleasing to see many objective details captured, and the simulations that they provided for comparison clearly show how the various bright areas can be positively correlated with bright ray craters and their ejecta. The UK weather was not very cooperative at the critical time this year, but the results achieved are some of the best so far obtained from this country. All observers used different specifications of ZWO ASI cameras. Hooker made images from independent videos using nearly 100,000 frames to demonstrate the objectivity of all the albedo details he recorded. Kidd writes that clouds initially helpfully shaded his C14 from the Sun. A Section Report by Richard McKim, published the Journal, 127, 4, 2017, summarises all Mercury observations submitted to the BAA during 2007−2016, and provides useful comparisons and maps. 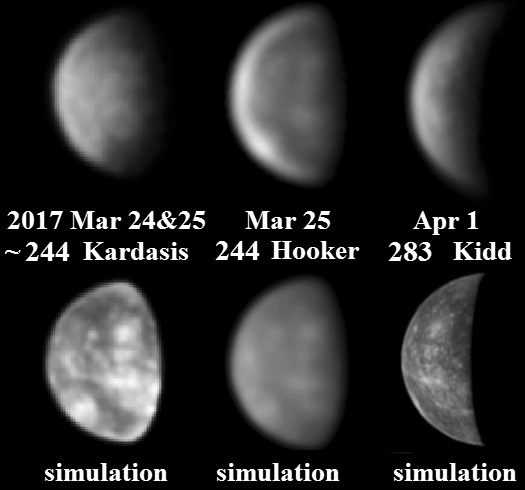