In spite of increasing interference from moonlight, observers have been taking advantage of the run of clear if somewhat hazy nights to record increasing activity from the annual Perseid meteor shower over the past few nights.

The Perseids are one of the most reliable showers of the year, producing an abundance of fast, bright meteors, many with persistent trains. This year, some observers may be put off by the fact that there is a bright Full Moon early on Friday, August 12, just 24 hours before the expected peak of the shower – predicted for just before dawn UK time (01h-04h) on Saturday, August 13.

Bright moonlight certainly has an adverse effect on meteor observing, lunar glare swamping out all but the brighter meteors, BUT the good news is that the Full Moon will be low down in Aquarius. Its declination of –15o at the time of Perseid maximum places it far south of the Celestial Equator and visual observers may minimize the effects of moonlight by positioning themselves so the Moon is behind them and hidden behind a wall or other suitable obstruction. This is easiest when the Moon is fairly low in the southern sky, as it will be for the Perseid peak this year.

The other good news is that many Perseid meteors are bright and there is a high percentage of fireballs, easily visible in spite of the bright Moon. Indeed, a 6-year study by NASA’s Meteoroid Environment Office (reported on www.spaceweather.com) found that the Perseids produce more fireballs than any other annual shower: 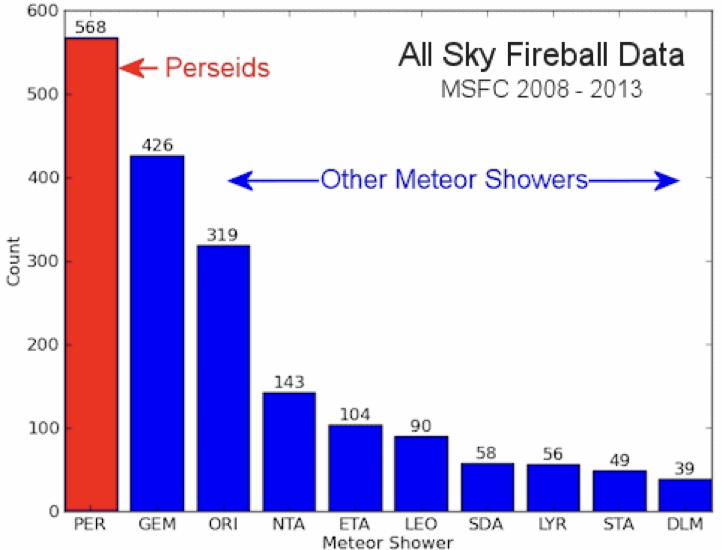 Perseid meteoroids hit the atmosphere at a velocity of almost 60 km/s (133,350 mph) and the intrinsic brightness of the Perseids is particularly important this year given the glare from the virtually Full Moon.

Observed Perseid rates will be best during the early morning hours as the shower radiant at RA 03h 11m, Dec. +58° on August 12/13 (near the Double Cluster, on the Perseus-Cassiopeia border) climbs higher in the eastern sky and observed meteor rates increase. The hour before dawn twilight interferes on Saturday, August 13 will probably yield the highest observed rates.

Observations in recent years have revealed noticeable variations in Perseid shower activity from year to year so one never knows exactly what to expect and unexpected activity can never be ruled out. The shower will continue to be active until about August 24. Also, don’t forget that observed meteor rates will be enhanced by members of several other lesser showers which are active at the same time as the Perseids, including the Kappa Cygnids, the Anthelion source and late members of the alpha Capricornids and southern delta Aquarids.

Meteor observing should be viewed, first and foremost, as a source of enjoyment for the observer(s). Whatever the approach and specific techniques applied, meteor observing can still produce unexpected results, and the only way to make sure you don’t miss out is to go out and observe!