This comet was discovered in outburst in 2010 and it will return to perihelion this year on March 17 at a solar distance of 1.6au. It is currently showing the results of a cascading fragmentation and multiple components are visible in amateur telescopes.

Towards the end of 2015 some predictions were using a completely unrealistic magnitude law which was based on the outburst magnitudes in 2010. These predicted that the comet should be easily detectable in small telescopes at around 10th magnitude. The comet was even on Heavens Above for a while. Despite the predictions the comet remained “lost” until the very end of 2015 when it was finally picked up by PanSTARRS. 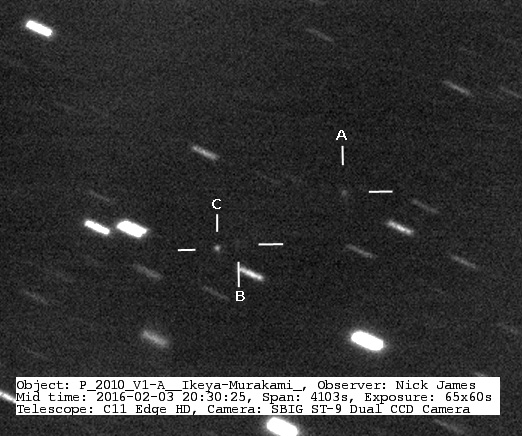 CBET 4230 reported the recovery in an image taken on December 31 with the comet at around mag 20.8. The new object was originally designated P/2015 Y2 but was soon linked to P/2010 V1 with a perihelion 7.2 days later than expected. CFHT images showed a second object 92″ E, 44″ S of the brightest fragment. These two fragments were designated A (the brightest) and B (the fainter, more diffuse one to the east). It was originally thought that this fragmentation had happened during the 2010 outburst.

Since early January the components of the comet have developed considerably. In recently issued CBET 4250 Zdenek Sekanina writes a fascinating description of the evolution of the fragments following the 2010 outburst. It now appears that the major fragmentation may have happened as late as 2012 when the comet was well past perihelion. As of February 4th the brightest object is fragment C which wasn’t even visible a few weeks ago. The original B fragment has almost disappeared and is now just a faint cloud to the west of C. Fragment A, which was the brightest component, has now faded but still shows a short tail to the south. A further, much fainter pair of fragments (designated D) is visible to the west of A on these images by Jean-François Soulier and Pieter-Jan Dekelver.

The A, B and C components are visible in relatively small telescopes with long exposures. I imaged them with a 0.28-m SCT last night (February 3) with C at around 18th magnitude and A around 19th. There are a number of images in the section archive and new images will be uploaded as we receive them.

The comet is approaching perihelion and is very well placed in UK skies. It is currently in Lynx moving very slowly and it will cross the border into Cancer around the start of March. If you have suitable equipment please keep this very interesting comet under observation and send your observations to the Comet Section. It will be interesting to see what happens next!