Juno successfully performed its fourth orbital pass low over the planet (perijove-4) on 2017 Feb.2, with all instruments turned on and fully operational.  The images from JunoCam were released on the web site within 36 hours.

The perijove-4 images are beautiful, and an annotated set of them, identifying features of interest including those seen in amateur ground-based images, has been posted on the BAA Jupiter Section web site under ‘RESULTS FROM JUNO’.  Direct link: https://britastro.org/node/9274.

The images have similar good quality to those from perijove-3, and this time the colour banding artefact was removed. For the first time, all the targets away from the poles were chosen by public vote.  They included close-up views of the three major belts in which dramatic weather outbreaks have recently begun (the NTB, NEB, and SEB).  The polar regions were also targeted by the JunoCam team, and provided further beautiful views of the novel features discovered at previous perijoves.

Meanwhile, NASA has announced that Juno will remain in its present 53-day orbit, because continued uncertainty about the main engine means that another attempt to change to the planned 14-day orbit might be risky. Both the science gain and the radiation damage will depend on the number of orbits, not the mission duration.  The mission will continue within the present budget until 2018 July, for a total of 12 science orbits, and then apply to NASA for funds to extend the mission for the intended total of 35 orbits. The NASA press release is at: 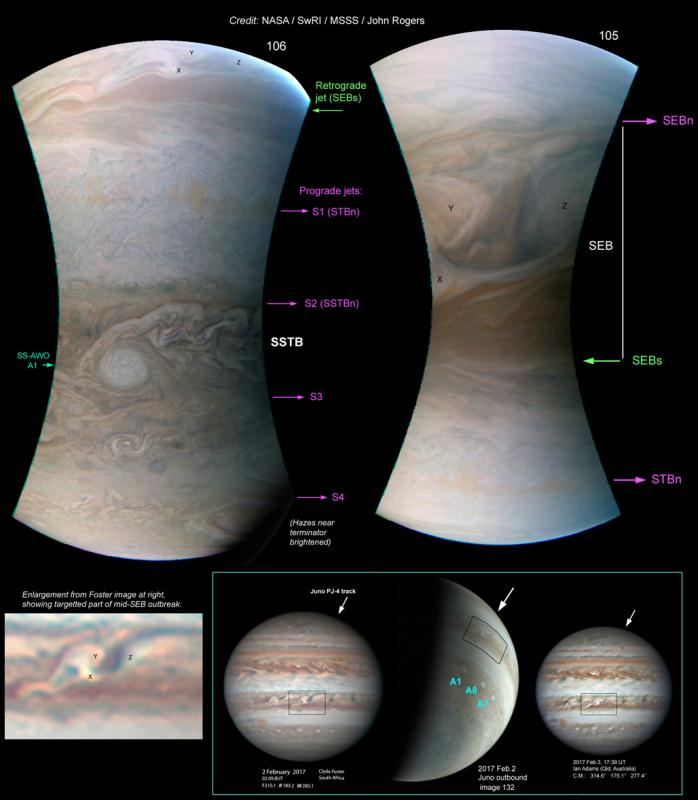