After putting on a good display high in the sky for UK observers 41P/Tuttle-Giacobini-Kresak and C/2015 V2 (Johnson) are now both heading southwards.

41P passed through perihelion on April 14 when it was in Draco and it is now heading southwards through Lyra and Hercules reaching northern Ophiuchus in early June. At its best the comet reached around magnitude 7 in early April but it is now fading as it moves away from the Sun and Earth. It should still be visible in binoculars from a dark site throughout May. 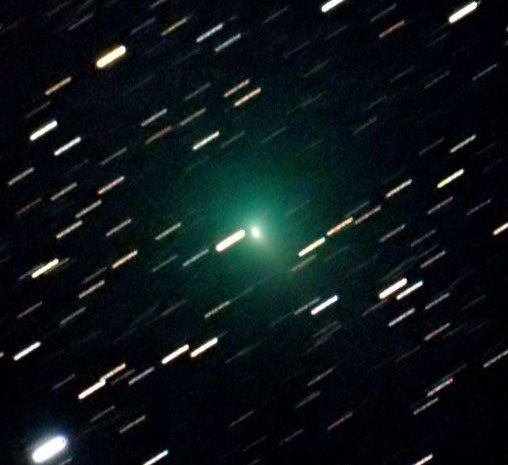 C/2015 V2 (Johnson) spent March and April in northern Hercules but it is now moving south through Bootes and will be around 5 degrees from Arcturus at the beginning of June. The comet is currently around magnitude 8 and is slowly brightening as it heads towards perihelion on June 12. The comet has had a prominnent dust tail and fan and now has a faint ion tail which is visible in deep images from dark sites.

A chart showing the track of both comets at two day intervals is here (41P_2015V2.pdf).

This image by Paul Curtis shows 41P on 2017 April 22. Images of both comets can be found in the section archive here.