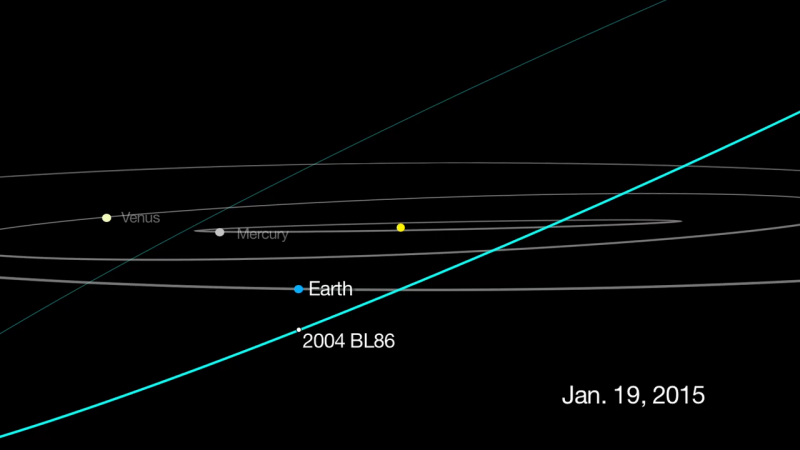 On the night of January 26/27, asteroid 2004 BL86 will make a close pass of the Earth becoming, for a short time, the brightest natural near-Earth object (NEO) that we know of (other than the Moon) for the next 12 years. Its orbit is such that the object will be very favourably placed for observation, especially for observers based in the UK.

We have a live feed planned for tonight here.

This potentially hazardous asteroid (PHA) is quite large (0.4-1.0 km across) and so will appear as bright as 9th magnitude when it passes the Earth at the safe distance of 1.2 million kilometres. Although it orbits the Sun every 1.84 years ranging between 0.90 AU and 2.11 AU, the forthcoming event marks its closest geocentric approach for several centuries when it will pass almost 3 lunar-distances away on January 26 at 16:20 UT. This close approach is especially unusual (for a PHA) in that it will continue to brighten by more than a factor of 2 after closest approach as it moves towards opposition, reaching the remarkably low phase angle of 1.1 degrees, and attaining a V magnitude of 9.0 on Tuesday, January 27 between 03:40-05:10 UT, during which time interval its apparent speed wil have slowed to ~2″/sec. Please note that its visibility as seen from Europe and North America is very favourable, and so you will not have to wait up until the early hours to spot it since (seen from the UK) the 9th magnitude object will rise and become readily visible soon after 19:00 UT. Its motion will be very obvious as seen through a small telescope (10-cm aperture or larger instrument) when it heads northwards leaving the constellation of Hydra and entering Cancer at around 23:10 UT on the 26th.

At its brightest, 12×50 binoculars or larger should reveal the interloper as it slowly migrates across the field of view. Between about 05:05-05:45 UT on the 27th, the asteroid happens to glide past the western (following) edge of the Beehive star cluster (Messier 44) as seen from southern England. Parallax will significantly affect its apparent position as seen by observers elsewhere. So if you wish to obtain exact celestial coordinates for your location, these can be downloaded from the Minor Planet & Comet Ephemeris Service:
http://www.minorplanetcenter.net/iau/MPEph/MPEph.html
You will need to enter your latitude and longitude (or observatory code – in uppercase – at or near your location) using the online form together with the time (in UT) when you are planning to observe. Using large telescopes with small fields of view, you might consider pointing the scope at a point in the sky where the asteroid is due to pass say 5 or 10 minutes later. You will hen be able to monitor teh object coming into view and traversing your field before disappearing at teh opposite edge of the frame.

Updates as to the nature of this object, together with observations by members, will be posted on the Asteroids and Remote Planets Section homepage:
http://britastro.org/asteroids/

Watch out for brightness fluctuations as it spins on its axis: that’s if 2004 BL86 turns out to be rather elongated in shape, or indeed if it happens to be a binary system. It is also worth observing with different filters to see whether its colour changes as it spins, or even spectroscopically to classify its type. Astrometry made from observatories assigned an IAU code should be reported to the Minor Planet Center in the usual way. Images and photometry will be collated by myself as section director – arps [at] britastro.org

Good luck to all weather-wise.

Richard Miles is the Director of the BAA’s Asteroids and Remote Planets Section.