The Phases of the Moon

The phases of the Moon are a result of where the Moon is in relation to the Sun and the Earth (or more importantly the observer who is usually on the Earth). The aim of this article is to give a simplified account of why we see different phases of the Moon.

A lunar month is about 29.5 days and during this time the Moon goes through all its phases from New Moon, Full Moon, and back to New Moon at the start of the next cycle.

Figure 1. The Moon appears to orbit the Earth in an elliptical fashion; not drawn to scale. 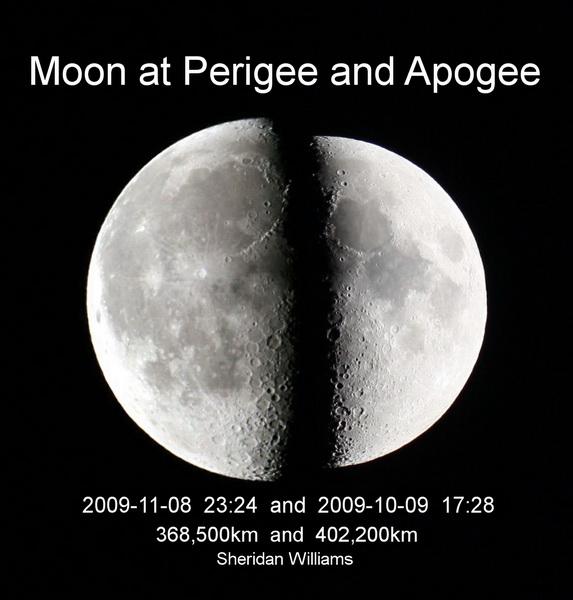 Figure 2. The change in apparent size of the Moon in the sky due to its elliptical orbit. Image courtesy of Sheridan Williams.

From Earth, we always see the same face of the Moon because the Moon is in a state called tidal locking. This comes about because the rotation of the Moon around its own axis takes the same time as it takes the Moon to orbit the Earth. This results in this tidally locked situation and the fact that we never see the far side of the Moon from Earth. In actual fact the rotation period of the Moon around its own axis is slightly different from the time it takes to orbit the Earth; this is discussed in the last section of this article.

The Moon does not emit any light itself; the only way we can see the Moon is because light from the Sun strikes it and some of that is reflected to us here on Earth. The same is true of the planets in the solar system, we can only see them because the Sun illuminates them for us. 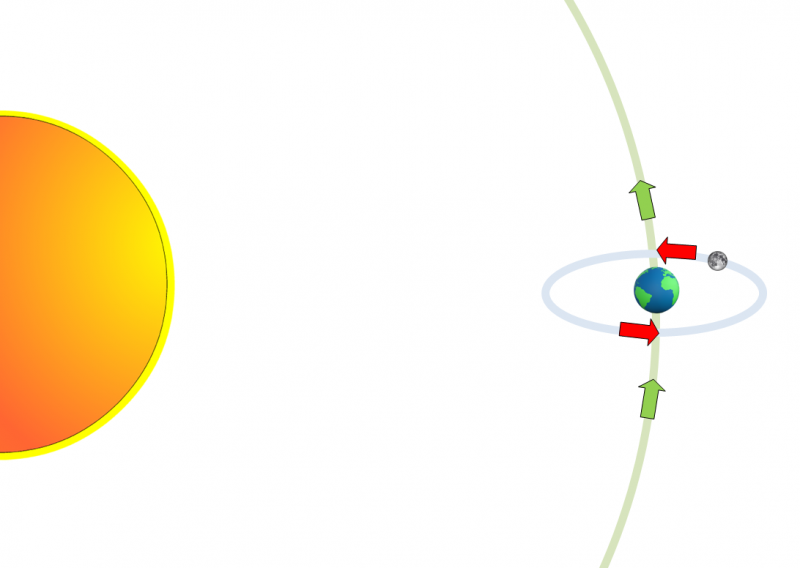 Figure 3. As the Moon appears to orbit around the Earth (red arrows), the Earth and Moon also orbit the Sun (green arrows); not drawn to scale. 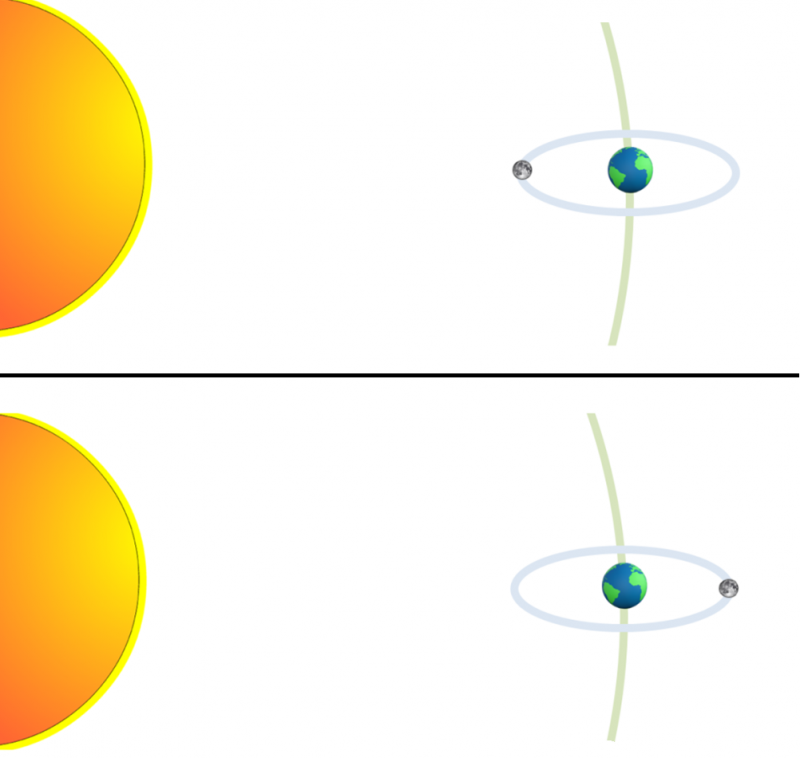 As the Moon makes its anticlockwise orbit around the Earth, a narrow strip of the near side of the Moon becomes illuminated and in the early evening sky we can sometimes see a very thin crescent of a New Moon. A few nights later the Moon has continued further around its orbit of the Earth and even more of the near side of the Moon is now illuminated (figure 5). The phases of the Moon between New Moon and Full Moon are in the so-called waxing phase of the lunar cycle; the phases of the Moon from Full Moon back to New Moon are in the waning phase. 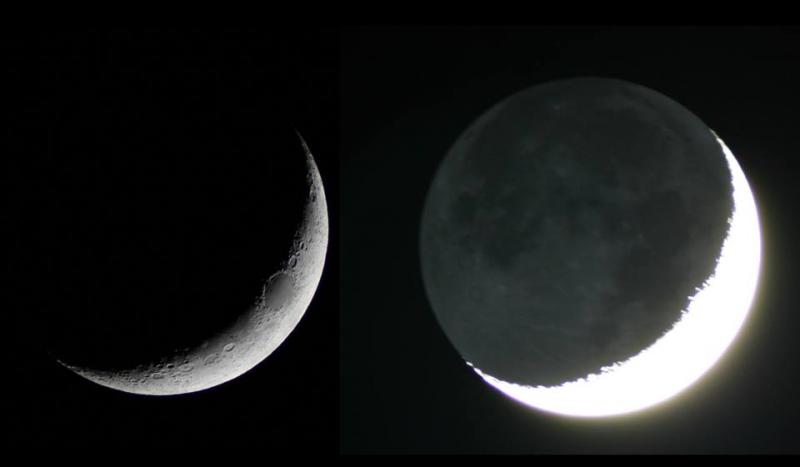 Figure 5. (left) Mare Crisium (the large circular dark feature) is illuminated by the Sun on about day 3 of the lunar cycle. (right) Whilst the rest of the near side of the Moon is not directly illuminated by the Sun, this shows how light from the Sun is reflected off the Earth and illuminates the remainder of the near side of the Moon – this is called Earthshine; this image has been purposefully over-exposed to demonstrate the Earthshine. Image courtesy of Mick Crook.

Eventually on about day 6 of the lunar cycle the crescent of the New Moon has enlarged to show about half of the Moon (figure 6, left) which is confusingly referred to as the first quarter (the Moon is now a quarter of its way around its orbit of the Earth). As the phase of the Moon moves between the first quarter and full  it is referred to as a waxing gibbous Moon (figure 6, right). 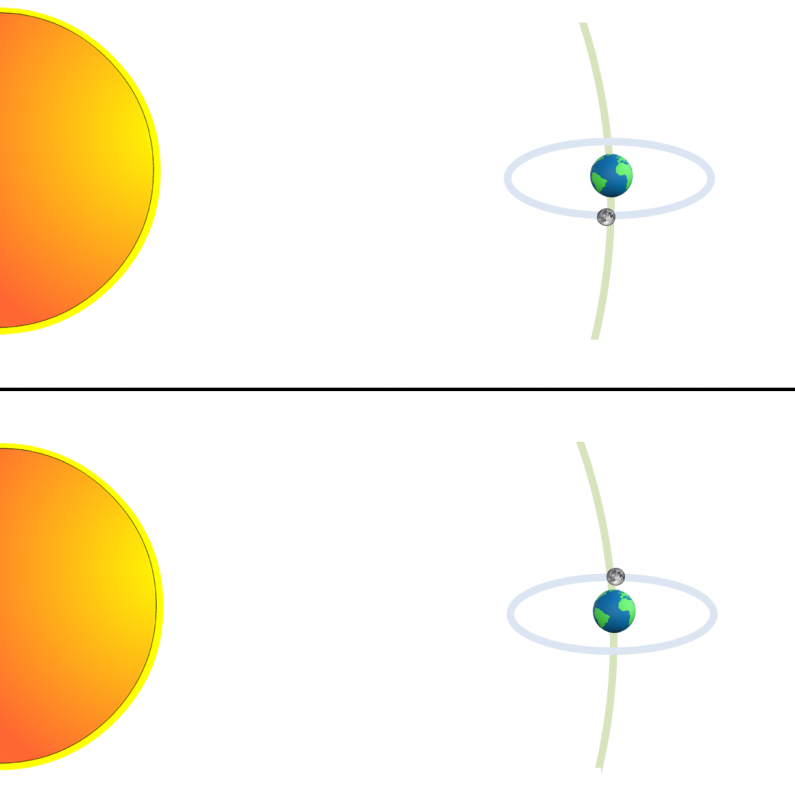 Figure 7. A quarter of the way into the lunar cycle the Earth and Moon are roughly the same distance from the Sun (top panel). The same is true three quarters of a way through the lunar cycle, though the Moon is now on the opposite side of its orbit around the Earth (bottom panel). At these two points the near side of the Moon is half illuminated, the so called first quarter, and last quarter, respectively; not drawn to scale.

On about evening 14 of the lunar cycle when the Moon is at its furthest point away from the Sun (figure 4, lower panel)  we get a Full Moon; the whole face of the near side of the Moon is illuminated and the far side of the Moon will be in darkness. The exact time of the Full Moon is listed in the BAA Handbook and elsewhere on the internet and in planetarium software such as Stellarium or SkySafari. 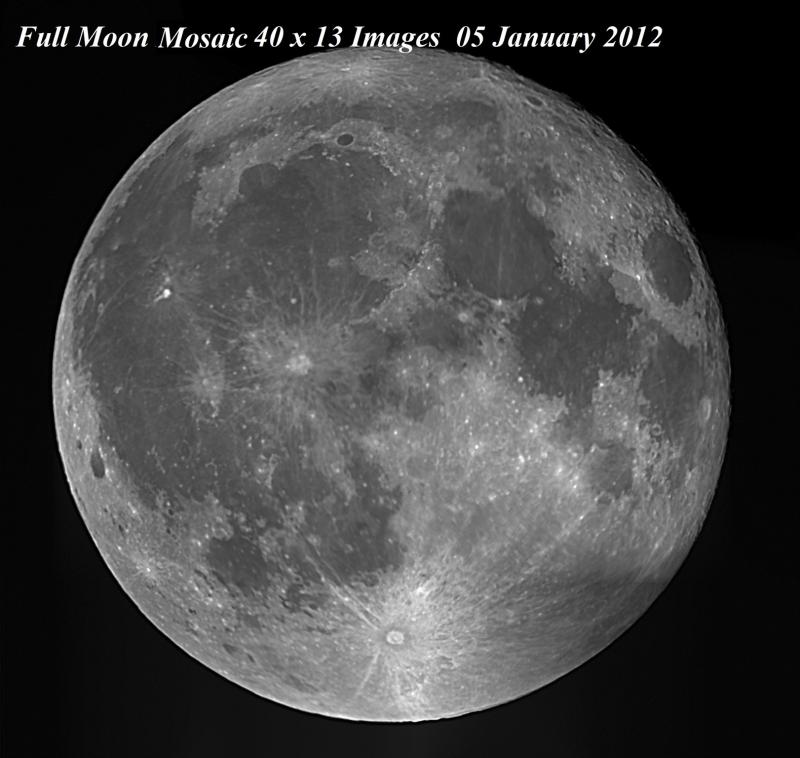 From here on the Moon begins its waning phase and over the course of the next two weeks the Moon has a waning gibbous phase, a last quarter and eventually a waning crescent just before the New Moon. The cycle then begins again. The full cycle of the phases and the relationship of these to the positions of the Sun, Earth and Moon are shown in figure 9.

Figure 9. The apparent positions of the Sun, Earth and Moon during one lunar cycle, and how the Moon appears to us on Earth during each of the phases; not to scale. From: https://commons.wikimedia.org/wiki/File:Moon_phases_en.jpg

But that is not the whole story…

This article has purposefully over simplified a few concepts, one of these being lunar libration.

Because the Moon does not orbit around its elliptical path at a constant rate (it travels slightly faster when at perigee than apogee), and because the Moon does not sit in the exact same plane as the Earth’s celestial equator, we actually end up seeing more of the Moon’s surface than we ought with a tidally locked moon.  Figure 10 shows an image of a Full Moon in the centre, and the eastern (right) and western (left) limbs imaged at the start and end of the lunar cycle respectively. Notice in the right hand panel (the eastern limb) that there is more of the eastern aspect of the Moon visible beyond Mare Crisium than in the image of the Full Moon. Equally, more of the western limb of the Moon is visible towards the end of the lunar cycle than at Full Moon. There is also a slight tilting forwards and backwards along the north-south axis too. Together these result in us being able to observe about 59% of the lunar surface from here on Earth. 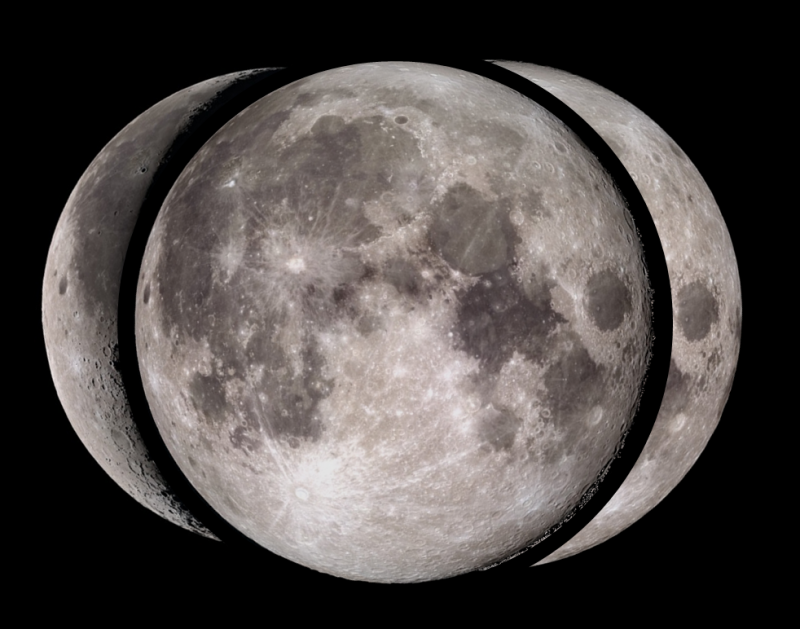 Figure 10. The effect of lunar libration on how much of the Moon’ surface we can observe during one lunar cycle. Composite image assembled by the author using images captured by the Lunar Reconnaissance Orbiter from the NASA’s Scientific Visualization Studio.

The composite animated image in figure 11 shows how lunar libration rocks the Moon backwards and forwards in both the east-west axis and also in the north-south axis. The apparent change in the size of the Moon is due in part to its elliptical orbit and to the phenomenon of apogee and perigee.

Figure 11. An animated composite image to demonstrate the effect of the lunar librations during one lunar cycle. Animation assembled by the author using images captured by the Lunar Reconnaissance Orbiter from the NASA’s Scientific Visualization Studio and assembled in GIFcreator.

A common question is why when the Moon is closest to the Sun, is there not a solar eclipse? The reason is that the Moon doesn’t orbit the Earth in the same plane that the Earth orbits the Sun (figure 12), so most of the time when a New Moon is between the Earth and the Sun it is several degrees higher or lower than the Sun. On occasion the two planes overlap and indeed the Moon does occlude the Sun causing a solar eclipse (figure 13).

Figure 12. The Earth rotates on its axis (black line) once a day. The Earth orbits the Sun in its orbital plane (blue line). The Moon orbits the Earth with an inclination of about 5 degrees off the Earth’s orbital axis (red line); not drawn to scale. 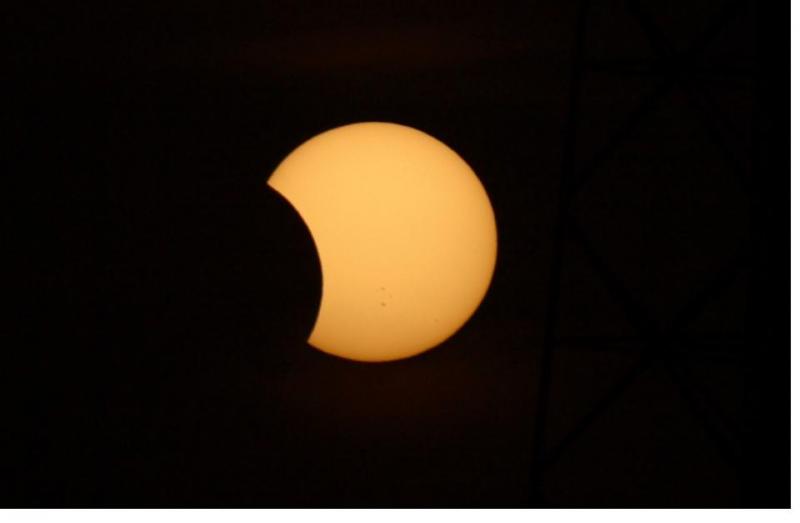 Figure 13. Partial solar eclipse where the Moon sits between the Earth and the Sun; image courtesy of Colin Henshaw.

There are numerous lovely lunar atlases, maps and books on all aspects of the Moon. Below is a list of some of the ones I own and enjoy, listed chronologically by author; many are now out of print but occasionally inexpensive second hand copies can be found. I make no apologies for how many books I have listed here, they are all special in their own way and I’d encourage you to have a look at them in book shops or libraries before making any purchase. Hyperlinks are to Amazon but other retailers are likely to have these books listed as well.

James is an amateur astronomer from Nottingham and member of Nottingham Astronomical Society.

Nottingham Astronomical Society
Society for the History of Astronomy

[To search for lunar observations uploaded by BAA members, following this link to search the BAA Member Pages]