Observer’s Challenge – the constellation of Pegasus 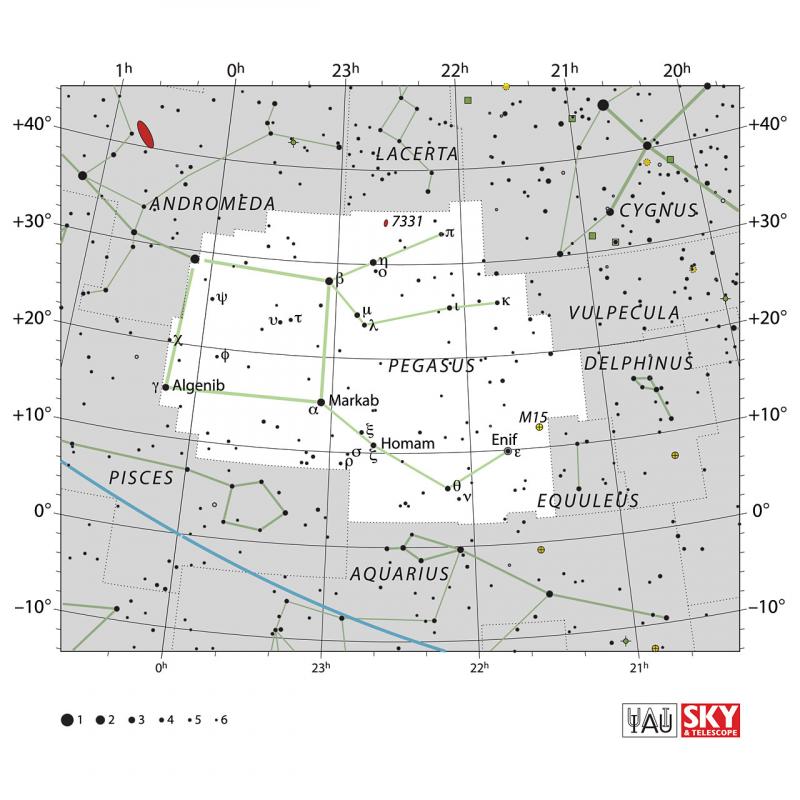 The Square of Pegasus is one of the first asterisms I learnt as a child, rising high in the southern sky in late autumn as viewed from northern latitudes. Interestingly, the four stars which make up the great square do not all belong to the Pegasus. The top left star, Alpheratz now belongs to Andromeda following the International Astronomical Union’s work on formalising the boundaries of all 88 constellations; the report to accompany this work was published in 1930.

The constellation of Pegasus (winged horse) is one of the larger constellations by area, ranking 7th biggest and occupying 1120 square degrees (2.72%) of the whole sky. Lying between the band of the Milky Way and the ecliptic, the constellation hosts a number of targets for all levels of amateur astronomer whether observing with binoculars or a telescope.

For those who love a bit of trivia, Pegasus is also the home of NGC 1, a spiral galaxy discovered in 1861. It is the first in the New General Catalogue as when the catalogue was constructed items were entered by their right ascension, and at the time it had the lowest right ascension – since then its celestial coordinates have changed and it no longer holds this title, but retains prime position in the catalogue.

Finding the great square itself in the night sky may be something you’ve not achieved before. I think it is the easiest asterism to locate in that part of the sky, as several of the adjacent constellations are not as easy to spot. Just to the left of the Square of Pegasus is the constellation of Andromeda and on a dark clear night using a star chart you’ll be able to find the Great Andromeda Galaxy with a pair of binoculars. Using the left two stars in the Square of Pegasus (Algenib and Alpheratz) you’ll also be able to draw an imaginary line from them to the star on the right of Cassiopeia (named Caph), and continue that line on to reach Polaris, the Pole Star, or the Northern Star.

Beginners might also want to try and find the only Messier object in the constellation, M15, the Pegasus Cluster. Pegasus the horse is upside down in the sky, and his nose is marked by the star Enif. In standard 10×50 binoculars M15 and Enif will appear in the same field of view; the cluster will have a dense core and a fuzzy haze around it through binoculars and you’ll need a telescope to be able to see the more classical appearance of a globular cluster as shown by this image. Counting the number of stars you can see with the naked eye inside the square is a way to compare the amount of light pollution from your observing site; in heavily light polluted skies there may be no stars visible inside the square to the naked eye, yet under very dark skies people with very keen eyesight have been known to count in excess of 30 stars!

Messier 15 (NCG 7078) is a popular target for many and is believed to have been discovered by Giovanni Maraldi in 1746 whilst hunting for comets, though rediscovered by Messier in 1764. It is a compact globular cluster, magnitude 6.3, and one of the oldest known. It lies less than 5° NW of Enif (Epsilon Peg) and through a small telescope the dense core is most prominent with more peripheral stars in the cluster scattered largely symmetrically around. Through a larger aperture telescope the core may take on a grainy appearance as the suggestion that it is composed of countless stars becomes more apparent. Colour images of the cluster will show a mixture of old yellow stars and younger, so called Blue Straggler, stars.

NGC 7331 is a galaxy and the brightest amongst the so called Deer Lick Group. Less than 7 degrees away from Scheat (Beta Peg) in the NW corner of the square, NCG 7331 is a spiral galaxy with a magnitude of 9.4. Through a modest sized telescope the core of the galaxy appears elongated in a roughly north-south orientation, and under very dark skies and with more aperture a subtle halo may appear marking out the spiral arms along this same axis. NGC 7331 is a popular target for astrophotographers, and composite images of the galaxy not only show dust lanes and the spiral arms, but often also show the other fainter galaxies in the Deer Lick Group, as shown here in an image by Paul Downing. Stephan’s Quintet is a cluster of five galaxies less than half a degree away from NCG 7331, and is often incidentally captured on images of the brighter neighbour. The brightest of the five galaxies is NGC 7320; you’ll require a very dark sky and a larger aperture telescope (>252mm (10-inch)) to observe this visually and expect to see nothing more than a very faint elongated hazy patch. To capture all five members of the group will require a determined astrophotographic method. Paul Curtis imaged the group in 2016 using a 10-inch (252mm) Meade LX200 and Starlight Xpress Trius-SX694 and achieved impressive results with just 60 minutes integration time.

If astrophotography isn’t your thing, and you just enjoy observing new things then track down 51 Pegasus (HIP 113357) which lies about one degree outside of the square to the west. It is a pretty unremarkable 5.45 magnitude star, approximately 50 light years from Earth, but was the first extrasolar main sequence star to be identified with an orbiting planet. The exoplanet was discovered in 1995 and is likely a hot Jupiter.

So whether you are just starting out in astronomy, or have been studying it for a life time, the constellation of Pegasus is a rich source of targets for the amateur astronomer, and I hope you are encouraged to get out there and observe.

If you make any observations (written notes, sketches or images), please submit them to the relevant BAA Section, and upload them to your BAA Members Page; we’d love to see them.

[The chapter on Pegasus in Burnham’s Celestial Handbook (in the third volume) is well worth a read.]