Over the next few weeks it should be possible to view five of the outer planets on the same night. It would be a long night, and I hope people will indulge me including the dwarf-planet Pluto as one of them, which of course is the biggest challenge of the set. 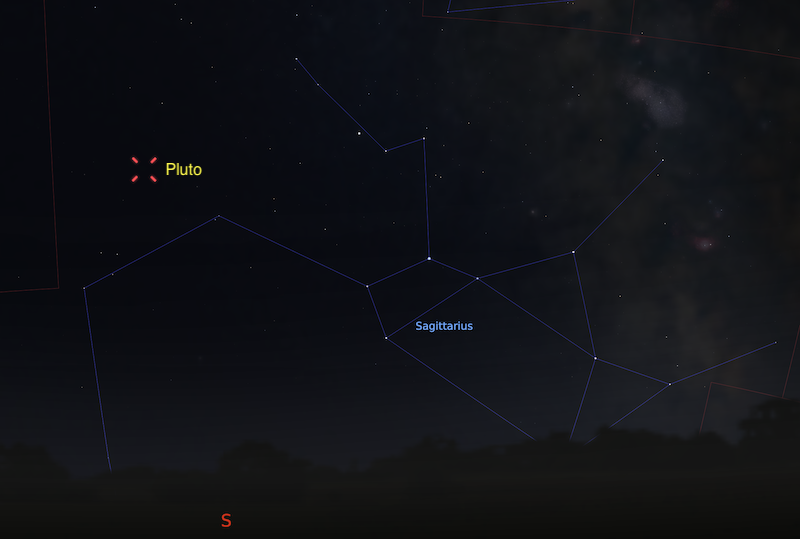 Pluto was at opposition on July 17th and although at its current closest approach to the earth is still a meagre magnitude 14.3. This makes a big but not impossible target for the visual observer. A medium telescope of 250mm aperture is probably the minimum needed. Careful planning and a methodical approach to locating the field will be necessary. Lying in the starry fields of Sagittarius makes it doubly difficult. It would be best to make finder charts of the target area for your telescope and eyepiece combination. Sketch the area where you think you may have found it, and then return another night if you can to confirm it by its movement. It is a little easier for imagers – it would be interesting to see if you can pick it up with a DSLR and a ‘standard’ lens. Now that plate-solving is ubiquitous amongst imagers even the need to return on a second night can be circumvented. For more information review our 2020 Challenge on re-discovering Pluto   (note some of the details will no longer apply)

Moving east we’ll come to Saturn which comes to opposition on August 2 and is well placed for observing in Capricornus, though rather low in the sky. Saturn is always magnificent when viewed through a telescope, but for a further challenge see how many of its satellites you can catch.

Next up is Jupiter, which comes to opposition on August 20 and lies in Aquarius at the moment. Not a particular challenge being such a bright naked eye target. Jupiter is a little low this apparition, but nevertheless is a well worth spending some time viewing with whatever optics you have. With binoculars you can track the motions of the Galilean satellites, and with a small telescope look for the bands and the Great Red Spot.

The following two planets rise after midnight in July, so you will need to stay up late to record these.

Neptune is located in the east of Aquarius but near the border with Pisces. You should be able to locate the magnitude 8 planet with binoculars, and it has a rather distinct blue hue which easily differentiates it from surrounding stars. Telescopic views can be disappointing, with such a tiny disc, but will show it as a non-stellar object. You can also have a go at tracking down its brightest moon, Triton.

Uranus will be lying in Aries, but will be close to the eastern horizon. An hour before sunrise may be your best chance to catch it. At magnitude 6 it is rather easier than Neptune, and will show a small but rather featureless greenish disk with sufficient magnification on a small telescope. Uranus’ moons are also an interesting challenge.

Please do send any observations to the relevant section, and it would also be nice to see a montage or other representation of your observations on your Members Album.