The AAVSO lightcurve shows recent observations between 18-19 which I am sure are wrong. I’ve been keeping this star under regular observation and I have not seen it this bright since early January. The nova is only a few arcsec south of a 17th mag star and I think that is affecting measurements. In the thumbnail below, taken from my image of last night, the nova is visible faintly between that star and a fainter one further to the south. The fainter star is 18.5 and the third star at the right angle of the triangle is fainter than 19. The nova is much fainter than that. I get 20.1 in a 4 arcsec radius aperture which is offset 2 arcsec south to avoid including the 17th mag star. 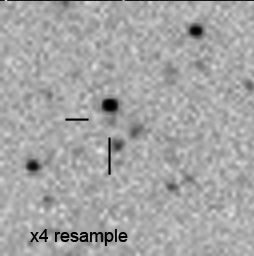