I had to look up how this could have been observed, as there was no solar eclipse.  Appears Young’s slits were in use, and i had the pleasure of a tour at the Late Commander H Hatfield’s observatory which employed this method in the 1970/80s.  My suggestion is that it could be caused by the Doppler shift making a prom appear fainter and darker perhaps. 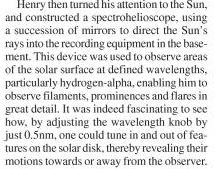