It might be worth pointing out that the H alpha line is made up of 7 components with two being significantly stronger than the others. The splitting is small withthe largest spin orbit coupling split in the 2p level (J = 3/2 ,1/2) 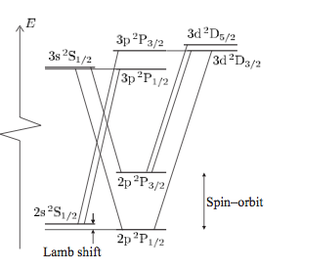 The theory of the spectrum of the Hydrogen atom traces the development of the quantum theory of light and matter. From the Bohr model where all the lines are degenerate in the prime quantum number  (as the are in the Schrodinger model) through the development of Sommerfeld and Schrodinger to the relativistic theory of Dirac, Darwin, Lamb and on to QED for which Shin’ichirō Tomonaga, Julian Schwinger and Richard Feynman got the Nobel prize building on the work of many others, where they are all split apart.