The sky has a never ending supply of surprises! Got two spectra over the night of 14/15 Feb. The first didn’t produce anything useful but the second was quite intriguing…

Took quite a bit of time to get the lines to fit what I think is the correct configuration but part of the problem was that it just didn’t look right. Not very scientific but it is surprising how quickly the brain starts to recognise patterns and this one looked odd.

After doing further geometric corrections to flatten the spectrum as best I could (it had rather a poor dispersion angle at the edge of the fov, never a good combination 😉 ) it twigged what I was seeing.

This particular meteor is VERY sodium deficient. There is much in the literature about sodium deficient meteors but this is only the second time I’s seen no sodium. Unlike the first, further back up the postings, this has other rocky minerals like Si and Mg though. There is a weak line at the Na emission, ~589nm, but this may not be sodium. Many of the small little peaks over the spectrum are processing artifacts from the re-orientation and de-slanting of the spectrum image prior to binning. This is what I term a “noisy spectrum”. However there is definitely no prominent Na line like most of the other spectra I’ve posted here. 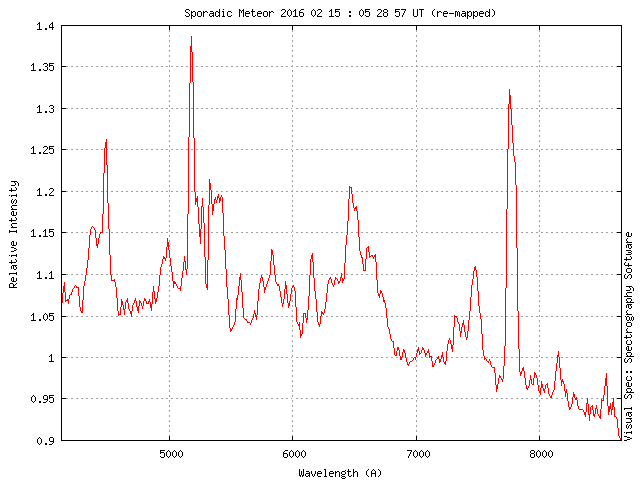 Another interesting result from the meteor spectroscopy survey world…

Thanks to the Nemetode guys there are other observations of this meteor so I’m hoping I’ll be able to get an orbit. William S. did get a Q1 orbit for the other spectrum as there were a couple of other stations that picked it up sadly nothing viable from my end. However if an orbit can be derived for the sodium deficient meteor then that will be an even better result. 🙂