I’ve been dusting off the cobwebs concerning this very fascinating but confusing topic and found a nice – if older – overview in http://articles.adsabs.harvard.edu//full/1992AJ&#8230;.104..725W/0000726.000.html that I have been reading. I found it very helpful and I’ve summarized its main points here. What I like about this article is it does a nice job of trying to connect the squiggly lines found in spectra to the real world physics. Here’s a very light (no pun intended) summary…

Spectroscopically, novae can be divided into two main types – those with ionized iron lines (FeII) and those with Helium/Nitrogen lines. 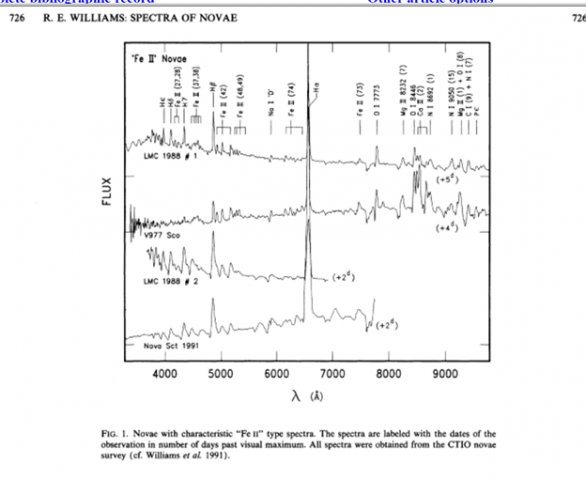 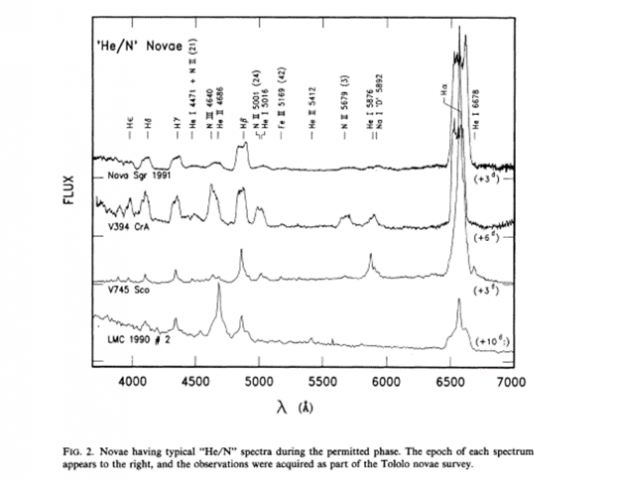 A given nova can have a spectrum that changes from one type to another.

Like certain supernovae, a nova forms in a binary system where matter builds up on a white dwarf – stolen from a companion star. If this accreted material ignites in a nuclear sense, it can form a nova. If the WD is sufficiently massive, (about 1.4 Msun) it can totally destroy itself and become a supernova. This kind of supernova, formed by the explosion of the same amount of matter (e.g., same number of sticks of dynamite since it always blows at 1.4 Msun), has a standard energy output and can then serve as a standard candle. In a nova, the WD is not destroyed.

The ejected material is in the form of a shell with a wind.

The shell has a high velocity and so its density drops rapidly.

Residual accreted material on the surface of the WD can continue burning gently.

If the winds are weak, the photosphere is close to the radius of the WD and its effective temperature is high. This creates higher ionization rates in the shell and produces He/N emission lines.

If the winds are strong, the photosphere is expanded, so its effective temperature is reduced, so the shell is less ionized, and much of the emission is from the wind (Fe II lines)

Different energies are needed to excite the different lines in the Balmer spectrum with H-alpha requiring the least. The closer the source region is to the hot surface, the higher the excitation possibility, so H-gamma is from deeper into the star than H-alpha etc.

As temperature is increased from zero… Collisions among atoms can bump electrons to higher orbits, from which they can fall and emit discrete line spectra. Hotter, and the atoms can be ionized – one or more electrons torn from atoms. As density drops, electrons can recombine with atoms and then cascade down through different lower levels; at higher densities, collisions might be driving electron back up, only to cascade back down.

From wikipedia… the Clasic P Cygnii line profile is essentially caused by the doppler effect acting on regions with different velocities. Emission lines coming from the wind, closer to the star and therefore with reduced velocity have minimal doppler change, while absorption from the shell – further out, closer to the observer, and approaching faster – involve shorter wavelengths; so a ‘line’ has both an emission part, and an absorption part at a slightly reduced wavelength. The separation between the absorption and the emission parts tell about the velocity differences. (More comprehensive explanations are available, but this seems good enough for now; the larger point is P Cygnii line profiles indicate the presence of an outflow of material.) 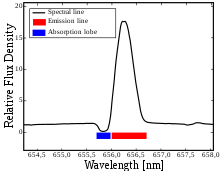 So, with this very brief summary, we can see the shapes of lines (P Cygnii, Flat, Narrow) informs us about whether the light is coming from a shell or the wind, and the presence of mass outflows. The presence of FeII vs He/N about winds and shells, and whether the winds are strong or weak, and the changes in the spectrum track how the nova is evolving with time.

So, there is a very strong connection between the wiggly lines of spectra and the underlying physics!