Since posting this discovery announcement at the end of January, both Nick James and myself have been observing this bright Supernova using multicolour photometry. We have been pleasantly surprised by the number of observing opportunities that we have had during these winter months at opposite ends of the east coast. The weather has been very mobile and clear spells have been frequent, but sometimes fleeting. We hope other observers have had similar experiences over the last few months. Our observations are shown an the attached lightcurve which is from the AAVSO database (the crosses are NDJ observations and the squares are DGB). The SN is currently very red and we have not transformed our measurements to exactly match V and R hence the bias between our two sets of observations. This supernova is at an interesting stage of its development and we would encourage more observations from BAA observers. 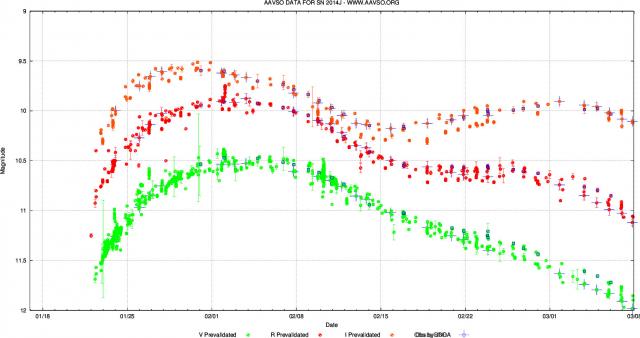