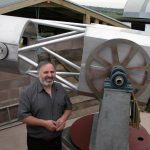 I joined the BAA in 1975 and was initally involved in the Lunar and Saturn Sections. During the next few years after learning my way around the sky I became more interested in observing comets and transient objects such as novae and supernova. I became a participant in the early warning and confirmation team of The Astronomer organisation. During this time I was able to meet and work with many of the BAA's most distinguished observers. I became most interested in participating in the International Halley Watch programme which was a world wide PRO/AM project to monitor Comet 1/P Halley during its 1986 apparition. I was able to submit astrometric measurements of my own ( and other amateurs images of Halley and other comets) for the use of orbit determination. I still do this type of astronomical observing today. The difference being that success in digital imaging and measuring is much easier to achieve that via photography. These days I regularly measure more than a hundred comet images per month from my home observatory in Highland Scotland at Portmahomack. I still follow any more interesting transient events in our skies such as novae, supernovae, and cataclysmic variables as well as any bright Near Earth Objects that are passing by. I also have a two camera meteor station running under the BAA Nemotode Network and submit monthly data to them. A bonus of living so far north (58 degrees N) are the dark skies with low light pollution and that means there are regular opportunities to observe the magnificent displays of Aurora Borealis and in the summer the noctilucent clouds. I operate two 2.7 meter domes, one containing a C14 on a robotic Paramount ME and the other 30cm f/4 Newtonian. Both are used nightly for ccd imaging.I have served the BAA in a number of capacities including a short spell as Director of the Deep Sky Section and I am currently the Secretary of the Comet Section.