Step by step we progress…

I caught a nice bright meteor on the morning of the 8th Jan 2016. However this time it was on one of the medium resolution set ups with  the 830g/mm grating.  Whilst this gives sub nm/pix dispersion it’s not quite down to my target of 1nm resolution but I’m getting closer and closer! Below is the graph and a colourised version.

The lines are nicely resovled, with the usual suspects present. 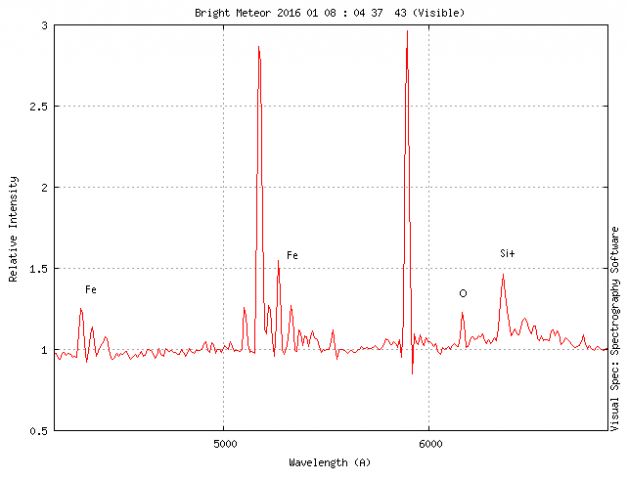 The spectrum did extend up to the near IR but due to it passing through the text at the bottom of the video fov I had to split it to eliminate the artifacts caused by the text. Here’s the IR part. This graphs looks a little more “chunky” than the visible due to the focus. The spectrum is focussed on the visible part and the IR is a little defocused as a consequence. 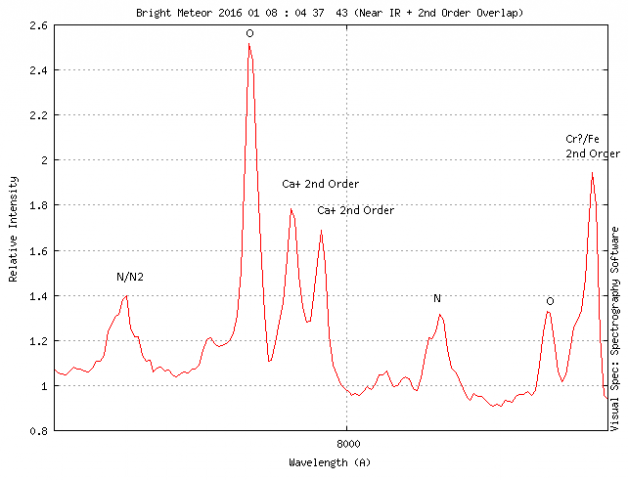 At first it was a bit confusing as to what the “extra” lines were. (The lines have been colourised deep red as they would of course be invisible other wise!) These turned out to be bright lines from the 2nd order overlapping the 1st order. This is a problem with gratings and it only gets worse as ones goes to higher line counts and higher orders. (One benefit from the 2nd order is that the dispersion is twice that of the 1st though.)

By measuring the wavelengths and comparing the differences in these wavelengths its possible to approximate the first order value and hence what the lines are. From the graph it can be seen what I’ve tentatively identified these to be. If one could actually “see” both the near IR and the near UV lines it might look something like this instead…