Many thanks for your offer to help.

To fill everyone in, the plate-solving facility of the new image galleries is certainly somewhat experimental. When it went live in December, there were a few teething problems that we identified. Among these:

* Plate-solving images that cover a very small area of sky can be very slow, and we imposed a time limit of 4 minutes on the software (and on a rather slow computer). In practice, some images can take up to 20 minutes of CPU time.

* We did not correctly solve images with EXIF rotation headers.

* We did not correctly solve colour-inverted images.

* We had a significant number of false positives – for example, photos of grass which supposedly resembled some star cluster.

Within recent weeks, I updated our automated software to fix these issues, and invested 8,000 CPU hours in re-solving the entire archive of 47,800 images – this time with a time limit of 45 minutes for each image, and on a computer twice as fast as the one I used in December.

The result has been a very dramatic increase in the number of images for which we have sky coordinates – specifically, an increase from 11,950 to 23,363. We do still have a significant number of false positives, but in the short term we think the best way to deal with those is to offer a facility to flag them (as Robin refers to). BAA members are able to flag their own images, and a small number of administrators also have the power to do so.

I’m not sure we have any immediate plans for further developments, though we’re always interested to hear feedback. We’ll certainly let you know if we have ideas for ways in which you can help.

You might find the two plots below rather interesting. The first is a histogram of the time taken by astrometry.net to solve the images in the archive. The second is a scatter plot of run-time against the angular width of the image. 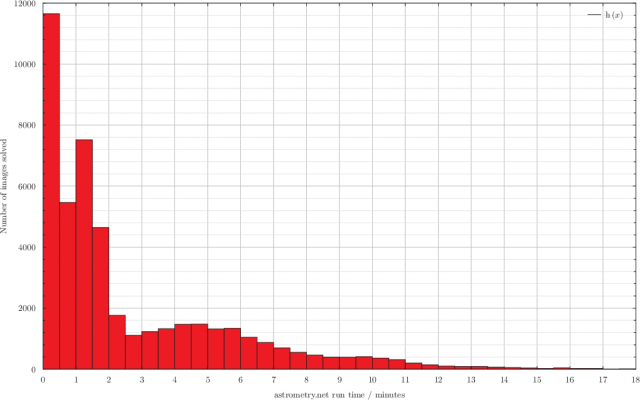 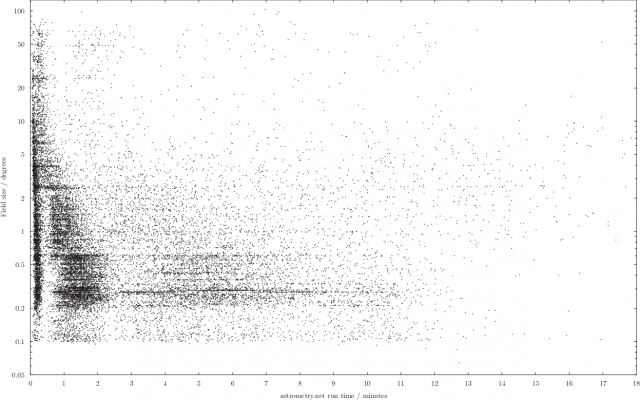 PS – I’m about to look into Robin’s original issue now, and will post separately when I have more news.