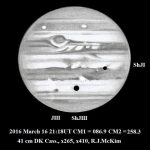 Dr Richard McKim is the Director of Mars Section (and, from 2004 till 2019, of the Mercury & Venus Section) and BAA Archivist. He also served as a Trustee during the past three Sessions. He was BAA President during 1993 to 1995. He lives in Upper Benefield, Northamptonshire with his wife and daughter, and is a chemist by training. He uses a 41 cm Dall-Kirkham Cassegrain telescope built by himself around optics made by Jim Hysom, housed in a homemade observatory. In addition to Astronomy, I have played first clarinet in the Rusty Players of Oundle orchestra but recently took up the oboe as a retirement challenge, and I enjoy sketching (see my Web Tutorial), travel and reading. My current profile picture is a drawing of Jupiter from 2016 March 16 when Ganymede was followed by its shadow against the NTeZ, and Io was followed by its shadow against the S. edge of the NEB. The Red Spot is shown to the left of the Central meridian.