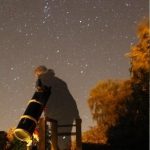 I've had an interest in astronomy since the 1970's, and was given a 60 mm refracting telescope in 1973 which saw much use over the next five or six years. My observational astronomy then largely lapsed, until my own kids were growing up and I acquired a 150 mm Newtonian telescope. My children did not appear to have the same interest I used to have, and I lapsed again. Until 2012, when I decided that surely I could take some astronomical pictures. I'm still trying four years later. I have a preference for deep sky objects. I still have the 60 mm refractor, but haven't used it for a few years, as I've now upgraded to a 200 mm Newtonian on a pier mounted equatorial mount.