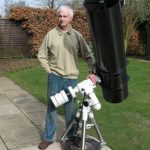 I've dabbled in many aspects of astronomy since joining the BAA in 1969, so I could be described as a fickle observer, never particularly loyal to any discipline. If something dramatic is happening I will try and image it, whatever it is. I've probably taken more images (using film in the 1980s and early 1990s) of comets than anything else....over 200 comets in total. I have also taken a lot of planetary images too, mostly of Jupiter. Other popular targets for me are supernovae, novae and variable stars in outburst. In recent years I've tired of gruelling, cloud-battling, pre-dawn UK sessions (even if I'm indoors for much of the time!) and succumbed to the attraction of remote imaging. This is especially attractive via Siding Spring where the night is 10 hours out of sync with the UK and objects never visible here can be imaged! I've also spent many man-months writing historical papers about BAA characters in recent years. My main telescopes are a Celestron 14 on a Paramount ME and, for planets, a 12" f/5.3 Orion Optics Newtonian.