A/2017 UI: A first interstellar visitor to Earth’s neighbourhood 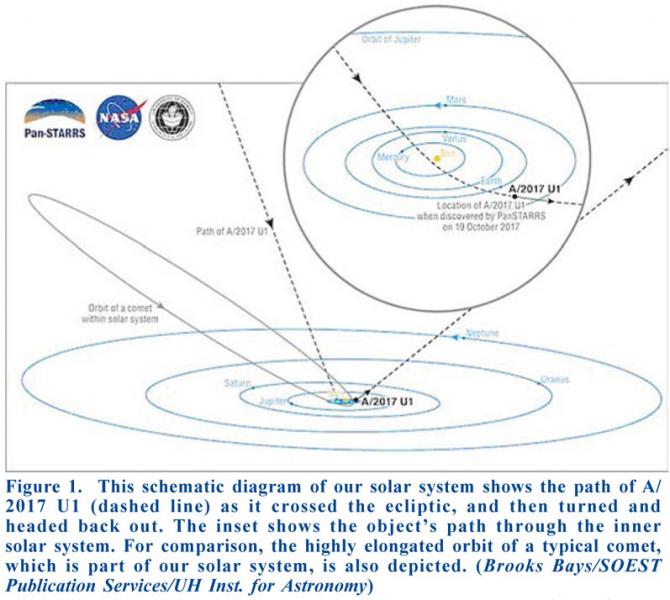 This remarkable object was discovered by post-doctoral researcher Robert Weryk with the 1.8-m survey telescope Pan-STARRS 1 on 2017 October 19 from Haleakala Observatory on Maui, operated by the Institute for Astronomy, University of Hawaii (IfA). The Minor Planet Center (MPC) added it to their Near-Earth Object Confirmation page that same day. Two days later, with more positions available, its orbit began to look very unusual: being retrograde in motion, highly inclined, of small perihelion distance, and having an eccentricity with a slight hyperbolic excess. Despite having a comet-like orbit, and passing close to the Sun, it remained faint and so was more likely to be asteroidal in nature.

As more observations were obtained, Bill Gray, author of the software Guide and FindOrb, posted a message on the Minor Planet Mailing List on October 25 pointing out that the object’s orbit was ‘quite exotic’, having passed perihelion on September 9 at a distance of just 0.25 au, with an inclination of 122° and eccentricity of 1.186±0.009, i.e. strongly hyperbolic. These findings indicated that it was moving so fast relative to the solar system that it was not gravitationally bound to the Sun, i.e. it was something of an interstellar vagabond not associated with any particular star system.

The MPC first announced the new object with the cometary designation C/2017 U1 (PANSTARRS) and appealed for further observations, noting that if confirmed, this object may be the first clear case of an interstellar comet. Later that day the MPC revised the designation to A/2017 U1, i.e. asteroidal rather than cometary in nature, given that no sign of cometary activity had been found in images taken with the 8.0-m VLT as reported by Karen Meech of the IfA. According to Alan Fitzsimmons (Belfast), its spectrum recorded by the 4.2-m William Herschel Telescope is featureless, having a red excess rather like a Kuiper Belt Object. Subsequent astrometry has confirmed the general correctness of the orbit and that its closest approach to the Earth occurred on October 14 at a distance of 0.161 au.

This object is therefore the first discrete interstellar body ever to be discovered approaching the Sun! With an absolute magnitude of 22.1, size estimates range from about 150 to 250 metres across. It appears to have originated from a point about 5° south of the bright star Vega and now, after being heavily perturbed by the Sun’s gravity, is leaving the Solar System in the direction of the constellation Pegasus. 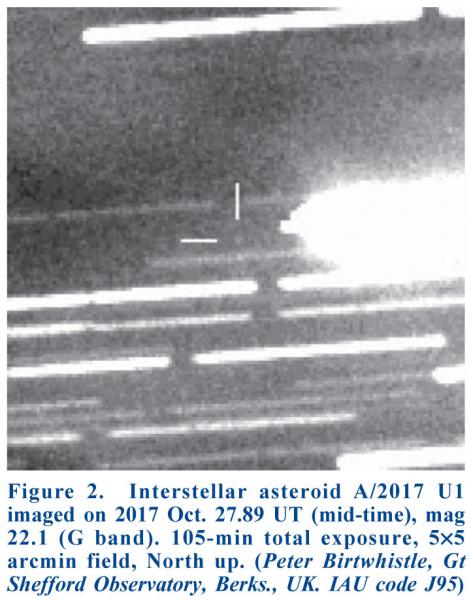 BAA member and ARPS astrometry coordinator Peter Birtwhistle comments as follows, ‘Frustratingly for me it was October 27 before clear skies arrived at Great Shefford and by then A/2017 U1 was already speeding rapidly away from the Sun and fading fast. I took a total of nearly five hours of exposure with a 0.40-m Schmidt-Cassegrain and CCD and divided the images into three groups, hoping to be able to measure some astrometric positions. Eventually, after discarding many images where A/2017 U1 was passing close to background stars and galaxies, I managed to obtain three astrometric positions, each measured at magnitude +22, one of the faintest objects I’ve ever recorded.’

Karen Meech has remarked that ‘We have long suspected that these objects should exist, because during the process of planet formation a lot of material should be ejected from planetary systems. What’s most surprising is that we’ve never seen interstellar objects pass through before.’

Now that the first such object has been discovered, we can indeed look forward to further discoveries of exotic objects that have travelled many light-years before reaching the Earth’s neighbourhood. New, more powerful survey telescopes, such as the 8.4-m Large Synoptic Survey Telescope (LSST), construction of which began in 2014, should transform our ability to detect these solar system interlopers – Watch this space!