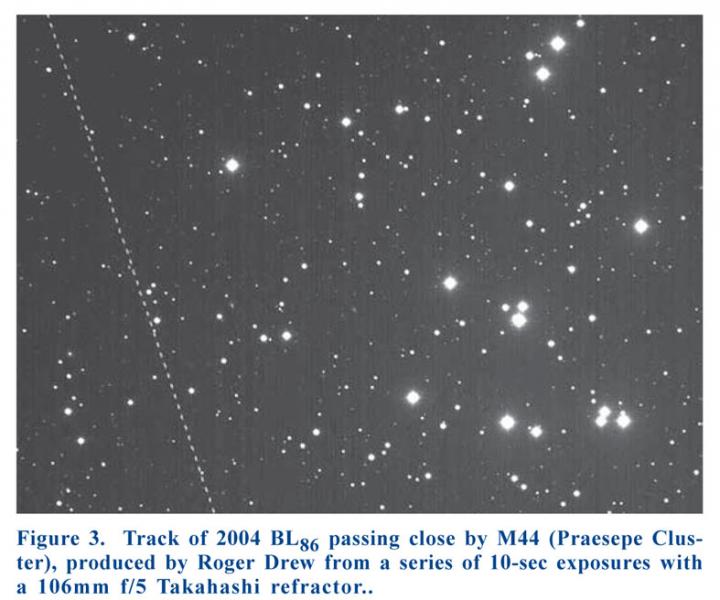 On 2015 January 26, the 300m diameter asteroid 2004 BL86 approached to within 3.1 lunar distances of Earth: the closest approach by any known body of this size or larger for the next 12 years, until 2027 Aug 7, when the ~1km diameter object 1999 AN10 will pass by us at roughly the distance of the Moon. Photometry by J. Pollock and five other observers prior to the 2004 BL86 close pass revealed it to be a binary system, which was soon confirmed by direct radar imaging by NASA scientists from Goldstone, California (Figure 1).

Discovered in 2004 by the MIT Lincoln Laboratory LINEAR survey from New Mexico, the approach of this potentially hazardous asteroid was known about for many years, the circumstances of its flyby having been listed in the BAA Handbook for 2015. At its brightest it reached mag 9 and was very favourably placed in the sky as seen from Europe and North America, being visible for most of the night of January 26/27. An alert was sent to BAA members via the Association’s e-bulletin list, and also to ARPS members by e-mail, since the apparition represented an ideal observing challenge for anyone equipped with a telescope or large-aperture binoculars.

Cloud, mist, fog or poor transparency dogged the efforts of many observers across the UK, but Nick James observing from Chelmsford, Essex was luckier with the weather than most and was able to set up a live webcast to the BAA website displaying a continuous series of 30-sec exposures in which the asteroid appeared trailed. In all, several thousand visits to the webcast from people worldwide were recorded by the system. Roger Drew waited up late to witness 2004 BL86 as it skimmed past the open star cluster Messier 44 around 05:30 UT on Jan 27 (Figure 3).

In total I received observations from 24 observers, and a report detailing the results, including visual observations, many CCD images (some in colour), a high-quality spectrum by David Boyd, as well as illustrations of the shift in the object’s apparent position due to parallax as seen by widely spaced UK observers, has been published online and will appear in the Journal in due course.