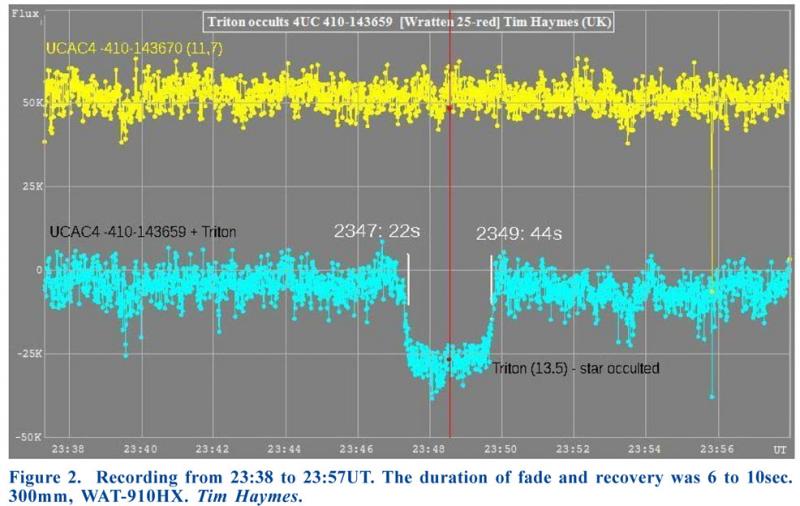 Amateur and professional observers succeeded in recording this rare occultation predicted by the Lucky Star Project Team. The path crossed Europe, N. Africa and the US East Coast, with the mid line over Portugal and Spain. We report observations made by Asteroids & Remote Planets Section contri-butors. The majority of these are clustered in Southern England, while an observation from Leeds by Alex Pratt is currently the observation furthest north in the UK.

On the night of October 5/6, Neptune’s largest satellite occulted a v12.7 star in Aquarius. This is only the second opportunity to monitor Triton’s diffuse atmosphere since its discovery by Voyager 2 in 1989. Britain was expecting an occultation of between 120 and 150 seconds depending on the observer’s location. Weather prospects were good over much of the UK and parts of Europe, and several keen observers succeeded in recording the occultation.

The Section has received 15 reports to date (Table 1). These were challenging observations with the Full Moon nearby and Neptune only around 25° in altitude. The proximity of Triton to the much brighter planet made photometry difficult. Alex Pratt (C8 & WAT-910HX video) used a portable instrument to avoid horizon obstructions. His video was analysed using Tangra3, while Nick James using a C6 & ASI120M was able to record until cloud intervened.

At the upper end of the instrument scale was Hampshire Astronomy Group (HAG) at Clanfield, where David Briggs & Steve Broadbent used the 61cm RC & WAT-910HX. A problem was encountered with the capture software, but this was corrected and a good result was obtained. The southernmost stations in England were at Southampton where Dr Nick Haigh used a 40cm F/4, ASI600MM-C and 610nm long pass filter, and Nick Quinn (Steyning, W. Sussex) who used a C11 (Figure 3).

In the Netherlands, Dr John Sussenbach wrote in his report: ‘From my location the occultation was imaged under poor seeing conditions while Triton and Neptune were only 23° above the horizon.’ A frame sequence is shown in Figure 1. 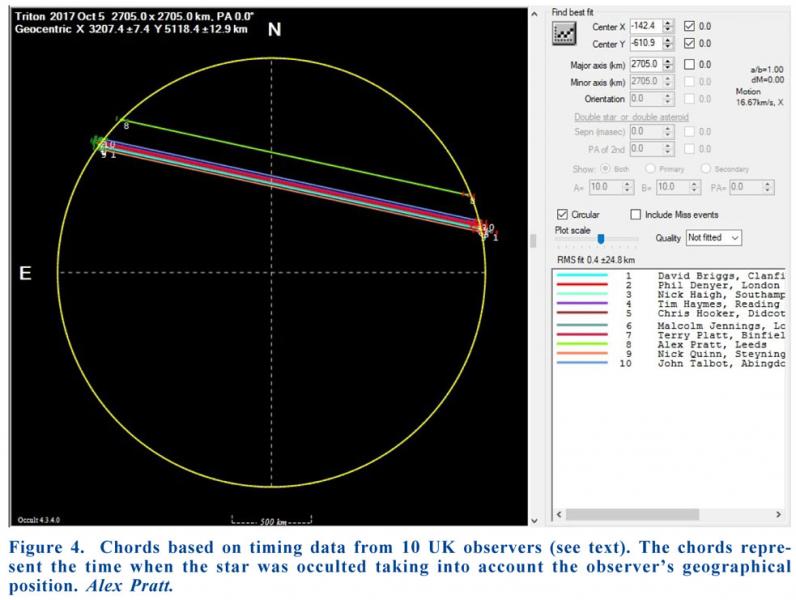 Comparison of timed chords with Triton’s diameter
Alex Pratt has used the timing data from successful UK observations to estimate the diameter of Triton. He has plotted lightcurves from 10 stations and the result is computed using Occult 4. (Figure 4). Almost all the stations were under a similar part of the occultation track as it swept across the country, so this has resulted in their effectively producing a single wide chord. We don’t have chords distributed around the theoretical circle. Because of this we used the accepted diameter of Triton of 2,705km. The chords show that Triton cannot be less than 2,500km in diameter. A better solution is likely to appear on Euraster.net using all data submitted to Planoccult.

Thank you to all observers, to Alex Pratt for Figure 4, and to the Lucky Star project for the opportunity to contribute FITS files for the ongoing professional studies of Triton.

The Asteroids & Remote Planets Section participates in a pro-am occultation observing programme for TNOs and Centaurs, predictions for which may be found on Felipe Braga Ribas’ website (and links therein). We also monitor other asteroidal occultations. Please contact the Director, Richard Miles, for more information.