Information on observing occultations can be found on the Introduction and Circulars pages on the European Asteroid Occultation Network (EAON) website. The EAON site should be considered the prime source of information on all matters relating to occultations. If there are differences between this site and theirs then please assume EAON are correct.

From time to time during the course of its orbit around the Sun, an asteroid will appear to pass in front of a star or another solar-system body as seen from Earth. Such a passage is referred to as an occultation. As the asteroid passes in front of the star, the latter will appear to dim or disappear altogether. The track width of such an occultation is very narrow – approximately the same width as the asteroid, i.e. typically no more than -~100 km or so. When the track intersects the Earth there will be only very few potential observers able to witness a positive occultation situated along it. Every observation whether positive or negative, is important in defining the limits of the track and hence the size and shape of the occulting body.

Occultations are the only way, apart from spacecraft missions to asteroids and radar observations of nearby objects, to determine the approximate size and shape of those bodies and are, of course, much cheaper and straightforward. They are an especially powerful way of studying small, very distant Trans-Neptunian objects, by watching stars, the light from which is blocked by the TNO for a few seconds. The Lucky Star project led by Bruno Sicardy in collaboration with groups from Paris, Meudon, Granada and Rio de Janeiro, provides predictions and oversees worldwide observing campaigns for the larger TNOs.

Predictions of possible occultations are available from EAON , Euraster and Steve Preston’s website. Predictions are necessarily only approximate as the orbits of most asteroids and the positions of most stars are not known to the required level of precision to accurately define occultation tracks well ahead of time. The margin of uncertainty has improved enormously in recent years, thanks to the Gaia astrometry, and is typically better than +/-50 km so that the probable area of visibility is accurate in general terms. Uncertainty is now rarely greater than +/-100 km in most cases. The predicted times will be more accurate and the probable error is of the order of +/-10 seconds.

Astrometry is sometimes requested prior to the event to allow the predicted track and time of occultation to be refined.

OCCULTATIONS OF STARS BY ASTEROIDS AND DWARF PLANETS

Occultation events for 2019 were selected by Tim Haymes from a world list of events computed and published annually by Edwin Goffin of the VVS (Flemish Astronomical Association).  The BAA is very grateful to Mr Goffin for permission to publish his predictions in the Handbook.

In the table of predictions below:
Time = UT of closest geocentric approach. 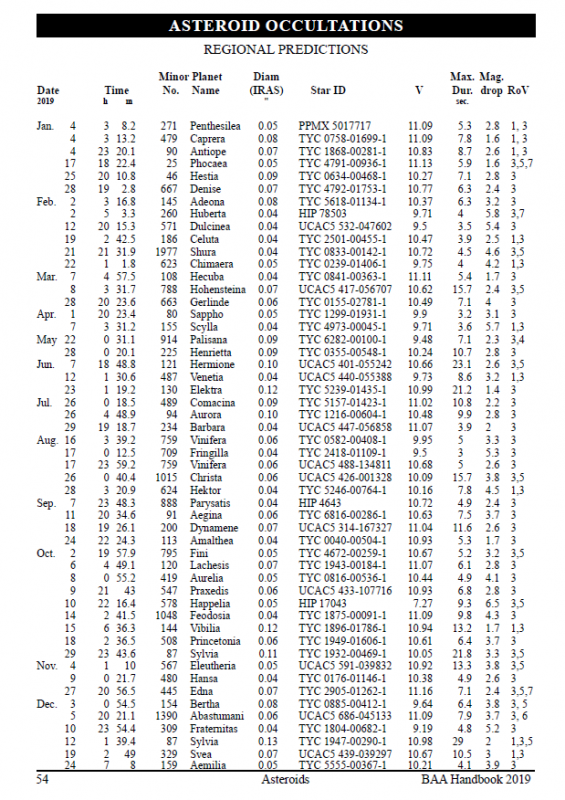 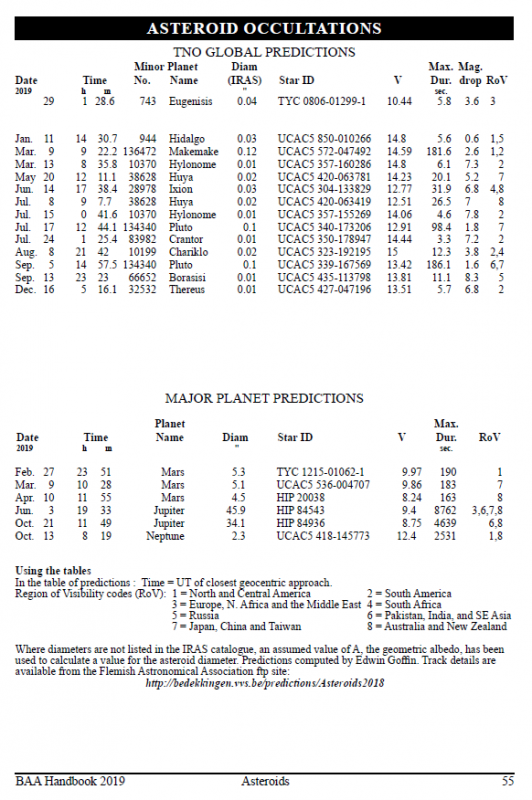 Example of an EAON chart

An example of an EAON chart is shown below. It includes star and asteroid data, duration of occultation, drop in magnitude of the star, time of the occultation, the track and finder charts. 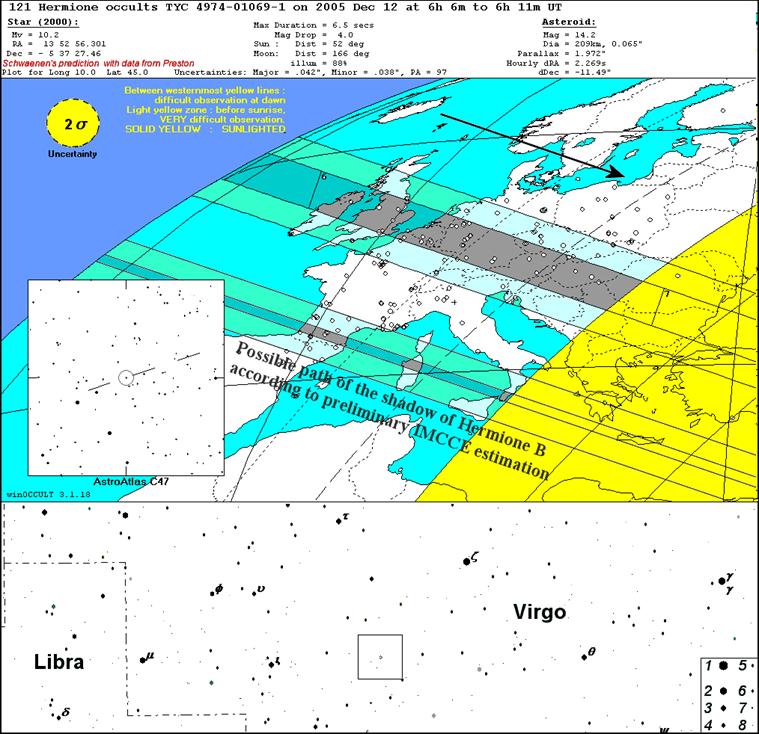 I would strongly recommend obtaining the latest orbital elements for the asteroid from the Minor Planet Center’s Minor Planet and Comet Ephemeris Service and plotting its predicted track on a planetarium program such as Megastar or GUIDE. Using a program with which you are familiar greatly reduces the chances of observing the wrong star. The example below shows the track of the asteroid from 10 – 15 Dec with the asteroid occulting the target star on 12 Dec.

Observing and timing the occultation

Spending several minutes staring at a star field through a telescope can be quite tiring and the eyes start to play tricks. This is particularly the case if the target star is difficult to see due to for example; its faintness, thin cloud or a bright sky background.

Practicing before the event is therefore to be recommended. You may find out that some obstacle is blocking your view of the event particularly if the target star is low down. It will also help you to identify the correct star field and, if the asteroid is bright enough, see it moving towards the target star. Such practice will also enable you to set the eyepiece in such a position that the event can be viewed from a comfortable sitting position if at all possible.

At the telescope, monitoring of the target star should commence some minutes before the predicted time and continue for at least the same period after it (the occultation prediction data will usually include a suggested time period). At the instant of occultation the brightness will reduce by the predicted amount, which depends on the relative brightness of the asteroid and star being occulted. Beware also when making an occultation observation of so-called secondary events which may happen some time either side of the primary occultation . Although termed `secondary’, such an event may also produce a dip in brightness virtually identical in magnitude to that of the primary event. Any secondary event may represent an occultation by a satellite of the minor planet.

See EAON Circular #5, Parts two, three and four for detailed explanations of various methods of recording the time of the occultation.

A radio controlled clock which uses the broadcast time signals to update the display will indicate the time to the necessary degree of accuracy. One’s error, or Personal Equation (PE), can be calculated and the occultation timings modified accordingly.

An example of timing using a stop watch (with lap timing feature) and a radio controlled clock and assuming a ‘Positive’ result.

One’s reaction time or Personal Equation (PE) should be calculated and subtracted from the times reported. The PE can be estimated using a stop watch as follows;

– cover the seconds, tenths and hundredths of second’s digits

– press stop when the next full minute is indicated

The indicted seconds and fractions of seconds will be your reaction time. Repeat the exercise say thirty times and take the average (mine was 0.3 secs). See EAON circular #5, Part one, Personal equation and accuracy for a more detailed explanation with examples.

Here is a link to a simulation of an occultation allowing the observer to determine their ‘Personal Equation’ . And a more amusing example.

The use of sensitive video cameras was demonstrated in the UK by the late Andrew Elliott in the 1990’s. (ARPS Assistant Director, Occultations 1990-2010).  Section members now tend to use video where possible and record onto videotape. This though is being superseded by digitisation to a PC using a USB (A/D) converter and free software such as Virtual Dub.

Digital recordings (known as AVI) are not affected by the observers eye / watch coordination which can be problematic for faint events. 80% of predictions are magnitude 11or fainter.

Video alone does not produce a time for the event. Frame counting will produce an accurate duration for an occultation, but the start and end time of the recording or the event, needs to be managed. This is effectively carried out using a Time-Text overlay on the video output before recording. Examples are listed in the Table 2. Table 1 lists typical video cameras used in occultation work:

Advantages of CCD or video
1) Exposure can be increased to detect fainter stars or TNOs, or allow use of smaller telescopes.
2) Occultations where the magnitude drop is too small to see by eye can be recorded (0.1-1.0 mag)
3) Permanent record created that can analysed by-easy-to-use software (esp. TANGRA-3 by Hristo Pavlov)
4) No personal equation and no errors.

Analysis techniques
TANGRA 3 software (free download) will analyse star brightness in an AVI or SER file and produce a light curve with timings. This application is the basis of most results. DRIFT scan requires some additional analysis (see the photometry/astrometry sub-section ).  Examples of  asteroid occultation light curves and reports can be found on Tim Haymes’ webpage at:  http://www.stargazer.me.uk/index.htm

Observation Planning in the 21st Century
Note that there are two software applications to assist observers select and prepare for events:

Occult Watcher is especially useful as it runs in the background and provides a real-time comprehensive listing of occultation events potentially observable from your own location. You can also register your observing station with others on an interactive GoogleMap.

By joining the PLANOCCULT mailing list (use link on the Euraster site) observers can see the occultation reports submitted by other observers. Reports should be sent to this list and copied to Gilles Regherre at gillesregheere@yahoo.fr and Jan Manek at jan.manek@worldonline.cz . The ARPS Director, Richard Miles, and ARPS Occultation Coordinator, Tim Haymes, are members of PLANOCCULT and will thus see all reports submitted.

Below is an example of how the approximate shape of an asteroid was derived from a number of observations. The importance of ‘Negative’ results are clearly illustrated. Observers 2 and 20 (and some others) didn’t see the occultation but their results put limits on the size of the asteroid.

A reporting form is available from EAON. Report summaries can be found on the EAON and Euraster web sites.

European reports can be found on the Euraster website.

You have to be fairly dedicated to do this stuff. There used to be the ‘Rule of Ten’ i.e. for every 10 occultations you prepare for, the weather will wash out 9 of them and for every 10 you actually observe you may get one ‘Positive’. Now that predictions a much more accurate, the chances of observing a positive occultation are substantially higher, but of course the weather still prevents observations in a lot of cases–! Remember for those observing close to the edge of the predicted track, ‘Negatives’ are just as important as ‘Positives’.  With predictions continuing to improve, the ratio of ‘Positives’ to ‘Negatives’ is steadily increasing. So please do get involved as the more observers there are, the more clearly we can derive the shape and size of these distant objects.

Hopefully he foregoing will motivate you to give it a try. Just remember that the greater the effort put in, the more rewarding is the actual success when it comes – Good luck.

Return to the Tools and Techniques Section