Deep Sky Notes ate articles which have been submitted by members. This provides more prompt publication than might have been with the PDF Newsletter. Contributions form members is encouraged – please just contact the Director 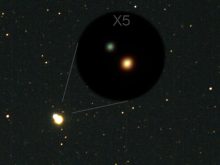 It has long been a matter of heated contention whether this gorgeous double star is a physical binary or merely a chance line-of-sight alignment, and you’ll find all sorts of conflicting statements made on the subject in recent books and on current websites. Neither of the modern astrometric satellite observatories HIPPARCOS or GAIA have yet managed to settle the matter definitively, although their parallax determinations for the two stars do suggest a difference in distance of anything up to 30 light years, well below which the two could not possibly be coupled together in a binary. The transverse separation projected on ‘the plane of the sky’ is 0.07 light years or 4440 times the Sun-Earth distance but that is obviously only a lower limit to what it could possibly be and the actual separation may be far larger: as yet, we just don’t know.

However, despite that, there is now sufficient data available to do a dynamical test (rather than a merely astrometric one) of whether the two stars can possibly be gravitationally bound to each other, a fact which does not seem to have been generally noticed (and only a couple of days ago I came across a webpage by a professor in my own university devoted to Albireo as a classic case of a visual binary, which latter at least it most certainly is not! But said professor is clearly not a practical, i.e. observational, astronomer). I’ve been reviewing the latest available relevant data this week, and doing some simple 2-body dynamics with it, with the following results:

The relative velocity (i.e. ‘internal’ velocity within the AB pair, discounting any shared common motion) of the two stars Albireo A and Albireo B is 6.7 km/sec to about +/- 0.1 km/sec, while assuming the extreme case most favourable to their being bound together by their mutual gravitation – that is, that they have zero separation along the line of sight (extremely improbable) and are therefore ‘only’ 4440 A.U. apart – and combining that with the best estimates of the stellar masses in a calculation which is essentially the 2-body fully generalized dynamical form of Kepler’s 3rd Law, the equivalent escape velocity of A and B from that least-possible separation is only 2.15 km/sec at most, again +/- about 0.1.

Conclusion: Albireo A & B cannot possibly be gravitationally bound to each other even if they are at exactly the same distance from us – so we don’t actually need to wait for GAIA to pin down the two distances finally, to settle the matter. This conclusion holds by a very large safety-margin and so is robust in the face of remaining uncertainties of data. It didn’t at all have to be so but, as it turns out, it is. To put that in the relevant dynamical terms, to ‘bind’ A & B gravitationally at that least-possible 4440 A.U. would require approximately 9.4 times their known total mass, making that of the combined A+B ‘system’ 109 solar masses – completely out of the question by a factor of at least 5.

Albireo is not a binary star – case closed!

Going Deep – In Pursuit of Z=5 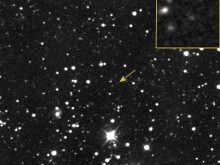 After many years of regularly upping stumps and following my employers around the country, I am now approaching full retirement and if the company want to move again, they can flaming well do it without me. Consequently, I have finally been able to assemble a small observatory and am more often able to stay up late – very late.

Because we ended up in south Wiltshire, I had a choice of living amid the bright lights, buzz and metropolitan glamour of Salisbury or being further west in the Cranborne Chase AONB, where a sheep crossing the road warrants a 2 page article in the Parish newsletter. Given that Tescos deliver, Amazon works fine and I don’t exactly follow fast fashion (despite my well deserved reputation for sartorial elegance), we opted for living in an area which, on the Philips light pollution map is dark blue:indicating the sky can be mag 21 on a good night. It’s not La Palma, nor Haleakala, but its pretty good for the south of England.

So, given that I am now likely to stay put for a few years, I have been able to erect an old 2.1m Pulsar dome, which I found being sold second hand locally. Thats a real joy – I have lower back vertebra that personally thank me every single clear night – and my set up time has dropped from 70 minutes to 15 minutes. The dome is not driven but, as I’m now officially ancient, I probably need the exercise of nipping outside to rotate the dome a shove every 30minutes.

Okay, there have been problems with stuff like TP-link refusing to work because the cheap n’ cheerful Chinese switched mode power supplies (SMPS) that powered the mount, CCD, heater and MiniPC were throwing a (subtle) wobbly by chucking lots of noise down the mains line (SMPS have some really fun failure modes which included turning off the CCD cooler and stopping the sidereal tracking randomly due to a floating voltage), but a Wifi repeater means I can now run things from indoors – yay! I will replace all the switched modes with a single linear PSU at some point, but theres no hurry as replacing 2 SMPs sorted most the problem.

So, what have I been doing with this new found freedom? Well, I’ve been doing CCD imaging since 1994 and while I still like taking pictures of striking fields of view, I am under no illusions: there are people out there who do it better. Some achieve it by greater skills, some by better kit and some by sending said nice kit to exotic locations, which lets them let them collect hundreds of hours of data a month! The standard of imaging these days is astonishing. People throw away pictures which would have graced the front cover of Sky&Telescope a decade ago. Also, I never really got into colour or filtered imaging and stayed monochrome, becoming good at dealing with sky gradients instead. Its possible I’m just getting old, stuck in my ways or cranky but, realistically, that probably started decades ago, and I was only practicing then – whereas, now, I seem to be getting good at it, and one should always play to one’s strengths. Consequently, rather than trying to take my “best” picture ever of something attractive, I like to see what can be squeezed out of the kit I have and know what the limits are. The results need only please me, no one else. It doesn’t have to be pretty.

On Christmas Eve I took, somewhat belated, delivery (well we were still in pandemic with messed up supply chains) of a 300mm f/4 Newtonian from Orion Optics UK – which was a bit of a shock as its only my second new OTA purchase in 50 years. A Celestron C14 or Meade 12” SCT OTA would have been nice and less of a squeeze in the small dome, but they were way out of budget and the greater focal length would be better matched with a large format CCD – ideally something like a QHY600 [1] – rather than a Starlight Xpress mono 694.

To read more you need to be a logged in member of the Association. Find out more about the BAA or join us.

[1] IMHO the QHY600 looks a thing of beauty and a joy forever from its specs and is high on my list of desirable items if Santa ever starts delivering to semi-retired, slightly arthitic kids. ↩ 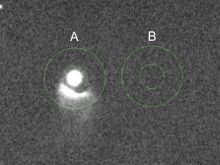 This article presents some CCD imaging observations I have made of the variable nebula associated with the variable star V347 Aurigae. In particular, I describe some measurements I’ve made on images to investigate the relative timings of changes in the brightness of the star and of its reflection nebula.

V347 Aurigae is a pre-main sequence variable star that is still embedded within its natal molecular cloud and appears to have formed in relative isolation, far from known star forming regions. V347 Aur lies within a small molecular cloud known as Lynd’s dark nebula (LDN) 1438 where no background stars are apparent. The faintly luminous curved edge of a reflection nebula is evident to the south and southeast of the star, approximately 10.5 arc seconds from the star. As part of the Deep Sky section observing programme of variable nebula I have been routinely imaging the star and its associated reflection nebula since the beginning of 2021 and Figure 1 is one such example image taken on 2021 February 9. The equipment used was an Atik 460EX CCD camera fitted to a Celestron C14 telescope operating at f7. No filters used. Total exposure time is 27 minutes and the field of view is approximately 19 by 15 arcminutes. North is up and East to the left.

To read more you need to be a logged in member of the Association. Find out more about the BAA or join us.