In the late 18th century Charles Messier produced his now famous catalogues of around 100 objects, where the exact counts vary according to which source is consulted. In recent decades it has become a fashionable challenge for amateurs to observe visually as many Messier objects as possible, with the term Messier Marathon generally being applied to a single night’s observing session. Successfully completing the Messier challenge is indeed a worthy aim (and one fairly difficult to achieve) for astronomers equipped only with today’s equivalent of good-quality late-18th century technology in the hands of amateurs: say an undriven 70mm refractor or 100mm reflector, no camera, and a copy of Norton’s Star Atlas.

Around two and a half centuries later, amateur astronomers equipped with good-quality early-21st century technology can do rather more. In this article another Marathon is proposed. It has some similarities with the original challenge, not least that some targets are easy naked-eye objects (as is the Pleiades, M45) and others are at the limits of detectability (such as the Owl Nebula, M97, with the telescopes used by Messier). There are, however, some differences. For a start, there are now far too many galaxies, nebulae and star clusters known for any one person seriously to consider observing them all individually within a single lifetime, let alone in a single night. Messier was also limited by having to observe from France and so could not see anything in the far southern sky; modern observers may embark on international flights and can make use of robotic telescopes located both north and south of the equator. Accordingly a Marathon is proposed which is simultaneously more and less restricted than the original. It is more restricted in that only a certain class of objects are to be observed. It is less restricted in that objects throughout the sky are included in the challenge, that imaging (as opposed to purely visual) observations are permitted, and that no particular time limit is set on how long the task may take to accomplish.

The Full GC Marathon is here defined as to observe, the more difficult ones almost certainly by imaging, all globular clusters which are known to be members of our Milky Way galaxy. As of 2020 there are 158 such objects and a list is given below.

Not everyone may wish to travel far enough north or south in order that they may observe globular clusters which never normally rise above their horizon; their challenge is to complete the Restricted GC Marathon, where the nature of the restriction should now be obvious. This challenge will not be discussed any further.

Some galactic globular clusters are naked eye objects, very easily so in the cases of ω Centauri and 47 Tucanae and, with greater difficulty, M13 and M15 though the latter demands very dark and transparent skies. A few may be impossible with facilities currently available to most amateurs. A significant part of the challenge is to determine the limitations of ones equipment and ability.

Unlike most stars and emission nebulae, the globular clusters are not largely confined to the disk of the Milky Way. Rather, they are approximately spherically distributed about the centre of the galaxy. As the earth is located roughly 30% of the distance from the galactic centre to the rim of the disk, perspective considerations suggest that a greater concentration of globular clusters should appear towards the direction of the galactic centre. As the centre lies well south of the celestial equator a greater number of globular clusters can be expected to be more easily visible in the southern hemisphere.

In the complete list, a selection from which is given below, the globular clusters are listed in decreasing order of Declination. This is for purely practical reasons: it is much easier and certainly less expensive for any given observer to wait until something rises above the local horizon than it is to travel a long distance to where it can rise. Immediately below, however, is a small selection of globular clusters which is ordered by a rather arbitrary evaluation of how interesting they may be to amateur astronomers.

The brightest globular cluster in the sky is ω Centauri. With a J2000 declination of −47°29′ it only barely rises from the southernmost parts of Europe and the continental USA and never gets very high as seen from the Canaries or Hawaii. It is a very easy naked-eye object at an apparent magnitude of 3.9 and has doubtless been seen since at least Palaeolithic times. It was catalogued by Ptolemy in 150CE. Almost 2000 years of precession has now made it much further south in the sky for us than it was for him, so he didn’t have quite the same degree of difficulty as modern European observers. Halley appears to have been the first European to recognize that it was other than a star and in 1826 Dunlop noted that it is an almost spherical cluster of stars. It is about 4850 parsec distant and about 50pc in diameter, consequently it subtends over half a degree in the sky. ω Centauri is quite possibly the brightest, largest and most massive GC known in the Milky Way. It contains several million stars with a total mass of around 4 million times that of the Sun. The cluster is so unusual that debate is still on-going as to whether it is a standard globular cluster at all, the alternative being that it is the remaining core of a dwarf elliptical galaxy which has been stripped of its halo by too many close passes near or through our galaxy. The distribution of the stars is very noticeably ellipsoidal and stars with relatively high “metal” content (astrophysicists call any element heavier than helium a metal) are somewhat more common in ω Centauri than in the majority of globular clusters. 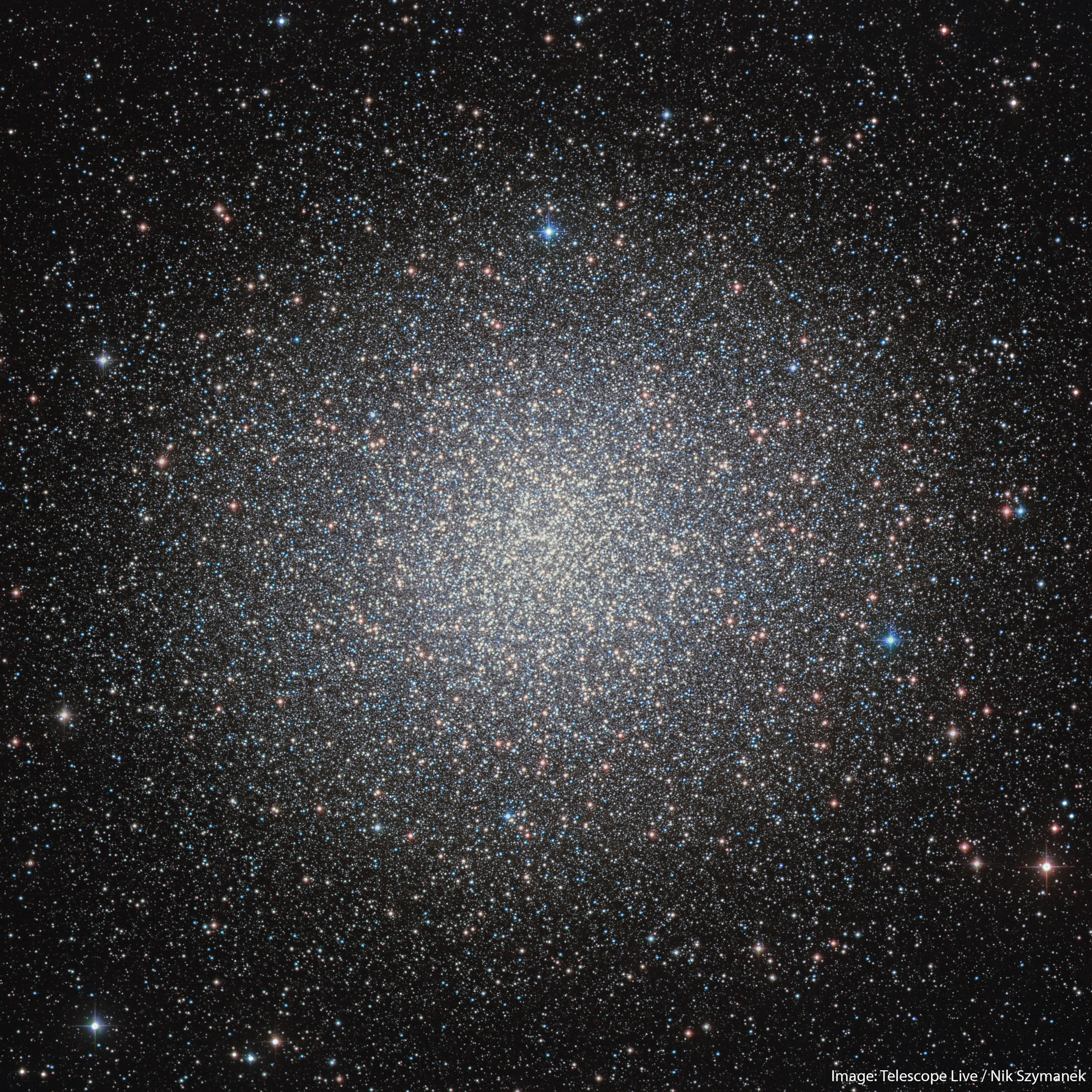 The most impressive GC in the northern hemisphere was catalogued by Messier, though it was known to astronomers long before it acquired the name M13. Another of the naked eye objects, though markedly more difficult than ω Cen, it is the easiest member of the GC Marathon for most observers living in the northern hemisphere. Positioned in Hercules, at a declination of +36° 28′ it is circumpolar in much of Europe and North America though most easily seen in their spring and summer. Its visual magnitude is 5.8 and is about 23 arcminutes across, so an easy object in binoculars where it looks like a fuzzy star or the coma of a comet. Relatively small telescopes will reveal the brighter stars and it is a glorious sight in a large aperture reflector, as it is in images taken by amateurs and professional astronomers alike. The star density in the central region is so dense that collisions occur very occasionally and form new stars named “blue stragglers”; they are of great astrophysical interest. Another member of the challenge, M92, also lies in the constellation of Hercules about 9° from M13; it may be visible to the naked (but unusually sensitive) eye under optimal conditions. 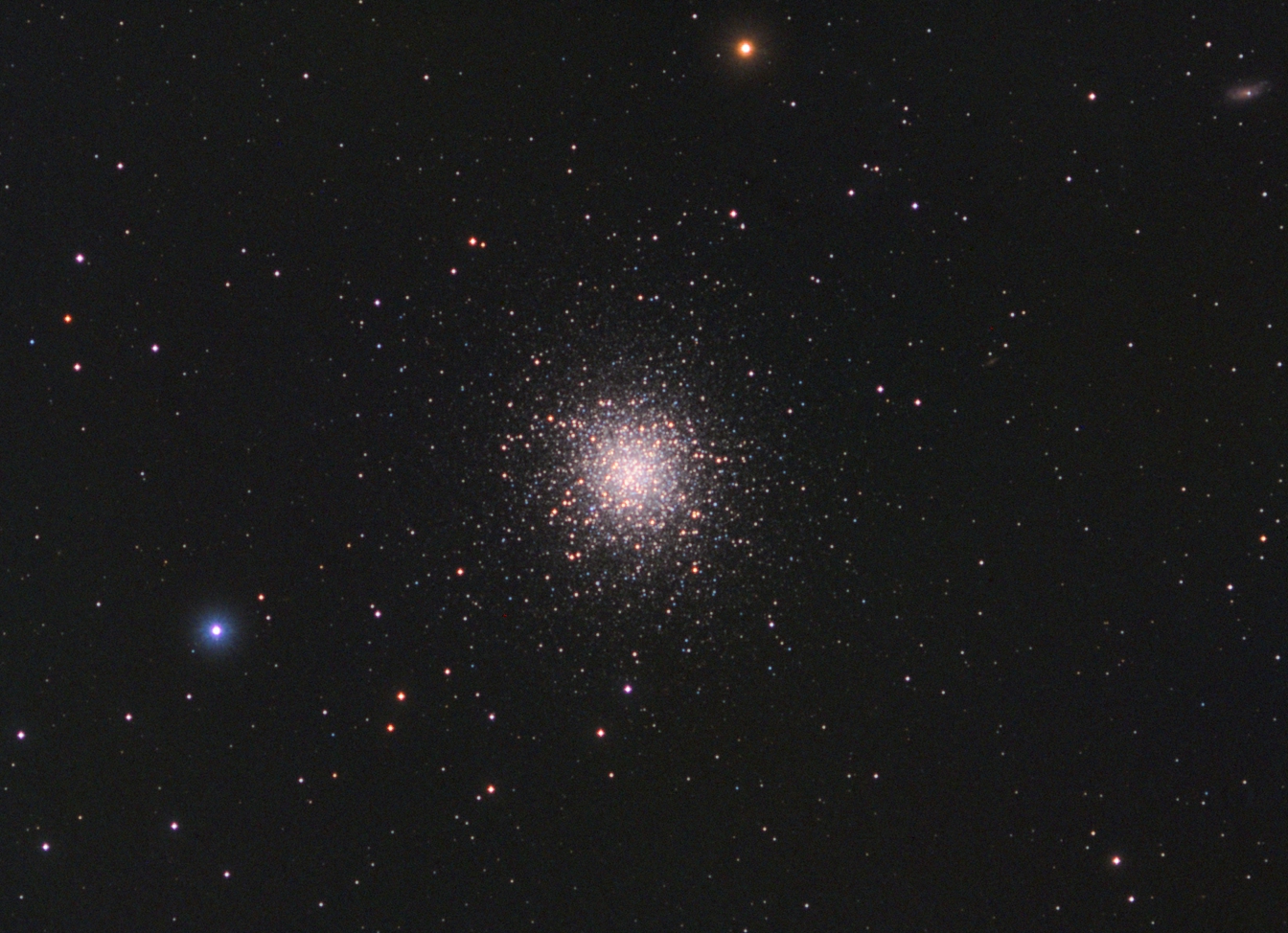 NGC 6397, aka Caldwell 86, is in the constellation of Ara and so too far south to be seen by the great majority of astronomers in the northern hemisphere. It is unclear whether it or M4 (aka NGC 6121), located near Antares in Scorpio, is the closest to the solar system; both are around 2300 parsecs away. The former is magnitude 5.7 and the latter 5.6. M4 may be a naked-eye object, though rather difficult because it is 0.4 degrees across and so is of low surface brightness.

NGC 288 is a fine example of a relatively loosely concentrated globular cluster and is visible in binoculars. It has a well-resolved 3 arc-min core and outlying members extend for at least a further 5 arc-min. It is of magnitude 8.1 and lies about 8.8 kpc from us. It is mentioned here because it is located close to the Sculptor Group in the sky, one of the two nearest groups of galaxies to the Local Group, but it is much closer than them. Globular clusters within the Sculptor Group form part of the Extended GC Challenge. Coincidentally a 15th-magnitude barred spiral galaxy, PGC 3068, appears to be inside NGC 288 and can be seen near the right edge of the image shown here. It is a background object and is at a much greater distance than either the globular cluster or the Sculptor Group. 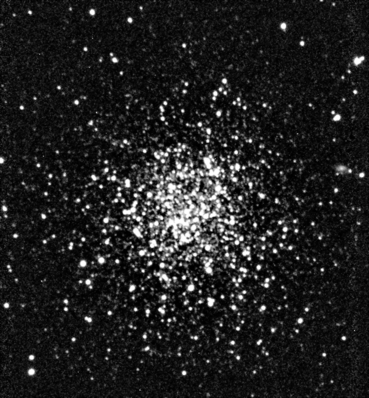 This pair of GCs form perhaps the most distant confirmed members of the Milky Way family. For a long time NGC 2419 in Lynx was named “the intergalactic wanderer” because it was thought not to be gravitationally bound to any particular member of the Local Group. Despite being 82.6 kiloparsecs from us and 91.5kpc from the galactic centre, it still shines at 10.4 magnitude which indicates that it is one of the most intrinsically bright GCs in the galaxy. From an observer located in the Andromeda galaxy it would be the easiest of all our globular clusters to be seen because it lies well away from the obscuring disk of our galaxy. NGC 7006, on the other hand, is positioned on the other side of the galactic centre from NGC2419 and is to be found in the constellation of Delphinus. Somewhat fainter, at mag. 10.6, it is significantly closer than NGC 2419 at “only” 41.2 kpc.

Despite being very large and very bright, FSR-1578 was only identified as a globular cluster as recently as 2007. It is intrinsically similar to ω Centauri, and may perhaps outclass it. Consequently, it would have been known since antiquity but for the fact that it is actually located within the core of the galaxy. The obscuration by gas and dust and, especially, the confusion caused by the dense star clouds left it unrecognized until so recently. Like ω Centauri, FSR-1578 is suspected to be the nucleus of a dwarf galaxy which has long since merged with the Milky Way. This globular cluster does not appear in any of the standard atlases. It described in the paper A SEQUOIA IN THE GARDEN: FSR 1758 – DWARF GALAXY OR GIANT GLOBULAR CLUSTER? where the position is given as 17h31m12.6s, -39°48′30″. This paper includes two images of the cluster.

Balbinot 1 is one of the faintest and sparsest galactic globular clusters known; it is located at 22h10m43.2s,14°56′59″ in Pegasus. It has around 100 known members (thousands of times fewer than the largest), the brightest of which barely reach 18th magnitude with fainter members being around mag. 25. It has been imaged by amateurs but with some difficulty. See my image for an example and a link to the original paper reporting its discovery. Despite its difficulty, this cluster appears on chart 40 of the interstellarum Deep Sky Atlas.

AM4 is one of the most difficult objects in the Full GC Marathon, though significantly easier than a few globulars which are visible only in the infra-red due to their very great extinction by interstellar material. It is about 3 arc minutes in diameter and the brightest of its roughly fifty stars are only 20th magnitude. It was discovered by Arp and Madore in 1987 entirely by accident when they made an error in positioning the microscope they were using to examine a photographic plate. As of 2020 it is not entirely clear whether it is truly a Milky Way GC or whether it is associated with the Sagittarius Dwarf Galaxy and so should be moved into the Extended GC Marathon. In any event, it is approximately 33kpc distant and located in Hydra at 13h56m21.7s, -27°10′03″. The discovery paper is available at A DISTANT STAR CLUSTER IN HYDRA, AM-4 which also includes a finder chart. A recent analysis may be found at The globular cluster AM 4: yet another young globular associated with the Sgr Dwarf Spheroidal galaxy?

The complete list of galactic globular clusters contains 158 entries and is inconveniently large to be included in its entirety in this document. It may be found as an HTML table and as an Open Document Format spreadsheet file, each of which will be updated if and when further information becomes available.

I wish to thank:

Copyright © 2020 by Paul C Leyland. This document may be reproduced under the terms of the CC BY-SA 4.0 licence.