An introduction to exoplanets

Introduction
Exoplanets, or extrasolar planets, are planetary size bodies which orbit other stars. There is much information available on the internet (typing ‘exoplanets’ in to a search engine produces nearly 10,000,000 hits !!!) and in book form so we offer pointers to such in order to get newcomers started on this truly amazing subject.

The Exoplanet Division of the Asteroid and Remote Planets Section offers a slightly broader range of topics than might be expected of a typical BAA section and should thus appeal to a wider audience. In addition to imaging and analysing exoplanet transits (when an exoplanet passes in front) of its host star and participation in professional-amateur projects;
– understanding exoplanets
– an introduction to astrobiology. Does life exist elsewhere in the universe?
– Citizen Science. Detecting exoplanets in data from Earth-orbiting spacecraft
– Search for Extraterrestrial Intelligence (SETI)
– space exploration. Progress in interplanetary and interstellar flight

We are just getting started as an organisation so it will take us some considerable time to come to grips with all of this but do read on to see what might be of interest to you.

More information is available via the Web links and Publications pages. For those who are interested in imaging exoplanets and analysing the data so gathered then the Guides/Tutorials and Exoplanet Transit Imaging and Analysis Procedure (in development) pages are the places to go.

Exoplanets
NASA Exoplanet Exploration https://exoplanets.nasa.gov/
You can find out about any particular exoplanet by selecting ‘The Search for Life’ and then ‘New Worlds Atlas’ from the drop-down list. For example select ‘Planets with host stars visible to the naked eye’ and ‘Super Earth’ from the filters on the right of the page. From the list select HD20794c and then on the resulting diagram select ‘System’ under view and ‘Compare to our Solar system’. You will see that the four planets in the system are much closer to their star than Earth is to the Sun. This is not uncommon but may be due to such planets being easier to detect than more distant ones.

Another example of a multi-planet system is Kepler 90. The two images below show the sizes and orbits of the planets compared with our Solar System. 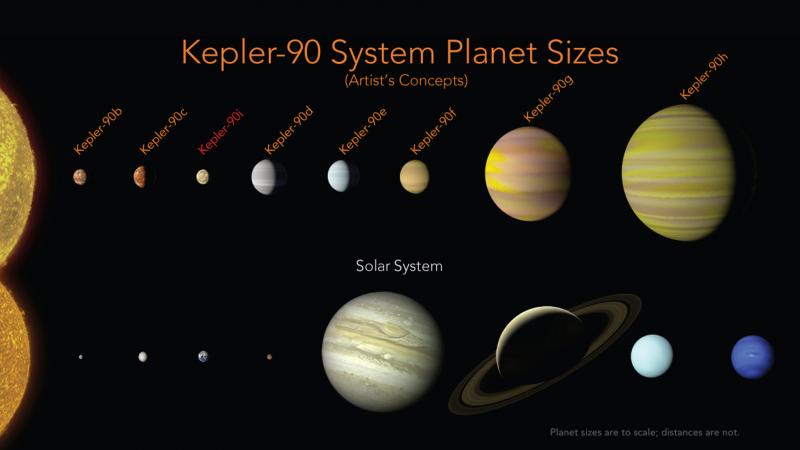 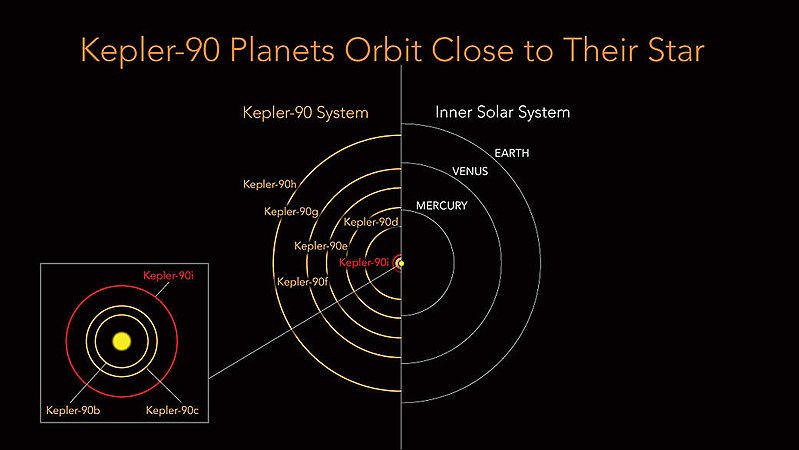 The book ‘How to Find a Habitable Planet’ by James Kasting, published by Princeton University Press, covers the development of life on Earth, the limits to habitability and the search for exoplanets. The Hunt for Alien Life by Peter Linde, published by Springer covers some of the same ground but also includes chapters on the possible existence of alien life, the Search for Extraterrestrial Intelligence (SETI) and interstellar travel. Two good books to start with. The on-line course Astrophysics: Exploring Exoplanets is designed for people who would like to get a deeper understanding of the subject. Participants will need a reasonable level of mathematics and physics to get the most out of this course.

Astrobiology
The late Steven Hawking stated ‘There is no bigger question in science than the search for extraterrestrial life’ and this is THE objective of exoplanet research.

Astrobiology seeks the answers to four questions;
– how did life originate and diversify ?
– how does life co-evolve with a planet ?
– are we alone or does life exist beyond Earth ?
– what is the future of life on Earth ?

The book ‘Astrobiology – Understanding Life in the Universe’ by Charles S. Cockell, published by Wiley Blackwell, includes chapters on all of the above. The on-line course ‘Astrobiology and the Search for Extraterrestrial Life’ also features the author and, combined with the book, gives a good grounding in the subject. The chart below shows those exoplanets which may be suitable for Earth-like life forms. 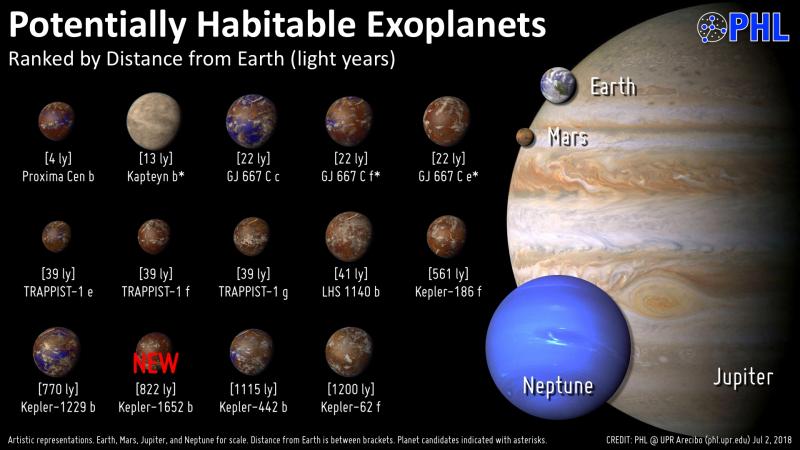 As to what is the future of life on Earth then ‘Homo Deus’ by Yuval Noah Harari, published by Vintage and ‘Life 3.0’ by Max Tegmark, published by Allen Lane make some suggestions.

Citizen Science
Believe it or not but you can discover exoplanets from the comfort of your armchair (or anywhere you have internet access). There are two alternatives which use data from orbiting spacecraft, Keplar (now retired) and TESS (launched in 2018); Exoplanet Explorers  and Planet Hunters TESS. The former uses Keplar data and the latter, as the name implies, data from TESS. Unfortunately Exoplanet EXplorers is currently out of data but Planet Hunters TESS is very much alive. The animation below shows how the light from a star is slightly dimmed when an orbiting planet passes in front of it – transits. This is what you will be looking for in the TESS data. The Field Guide explains the TESS mission and how exoplanets are detected.

The Search for Extraterrestrial Intelligence (SETI)
SETI is a serious business and should not be confused with what Mulder and Scully used to get up to in the X Files (of which I was a great fan by the way). The  SETI Institute searches for radio signals from intelligent civilisations using the Allen Telescope Array located in California, USA.

By signing up to SETI@home you can participate in the search for such signals by processing data on your computer as shown in the screen shot below. 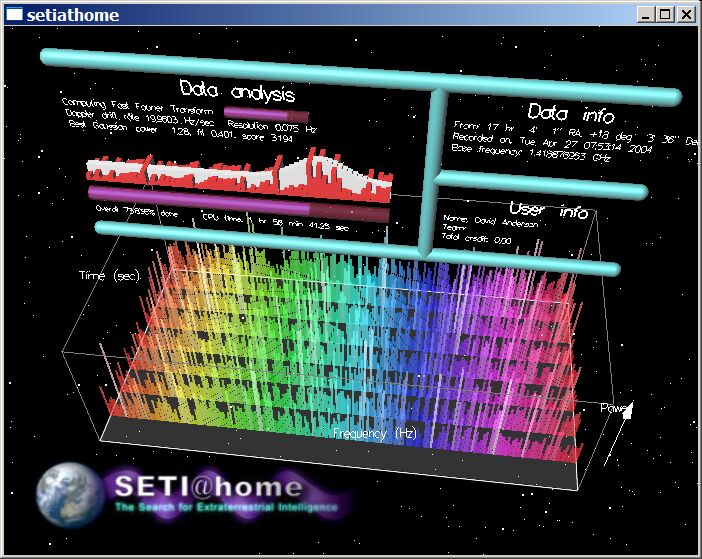 Space exploration
2019 marks the 50th anniversary of the first astronauts to set foot on the Moon as part of NASA’s Apollo 11 lunar mission. Since then we have been firmly anchored in low Earth orbit aboard the International Space Station. However things they are a-changing and indeed they must. Not wishing to frighten anyone but sooner or later we have to find a new home outside the Solar System, on what we now call an exoplanet, if our species is to survive. Why you might ask and there are a number of reason. For example our Sun is warming up and Earth will be too hot for life in about a billion years. A number of national space agencies and private companies are planning manned missions to the Moon and Mars. For example; NASA’s Explore Moon to Mars campaign aims to return astronauts first to the Moon and then on to Mars. Elon Musk, CEO of SpaceX, believes he can send humans to Mars by 2020 and establish a million strong colony there in 50 to 100 years time. The Tau Zero Foundation looks further afield – interstellar flight is its goal.

…and finally
I hope you have found something of interest here. Please use the ‘Contact the Director’ link if you require further information or have any comments to offer.