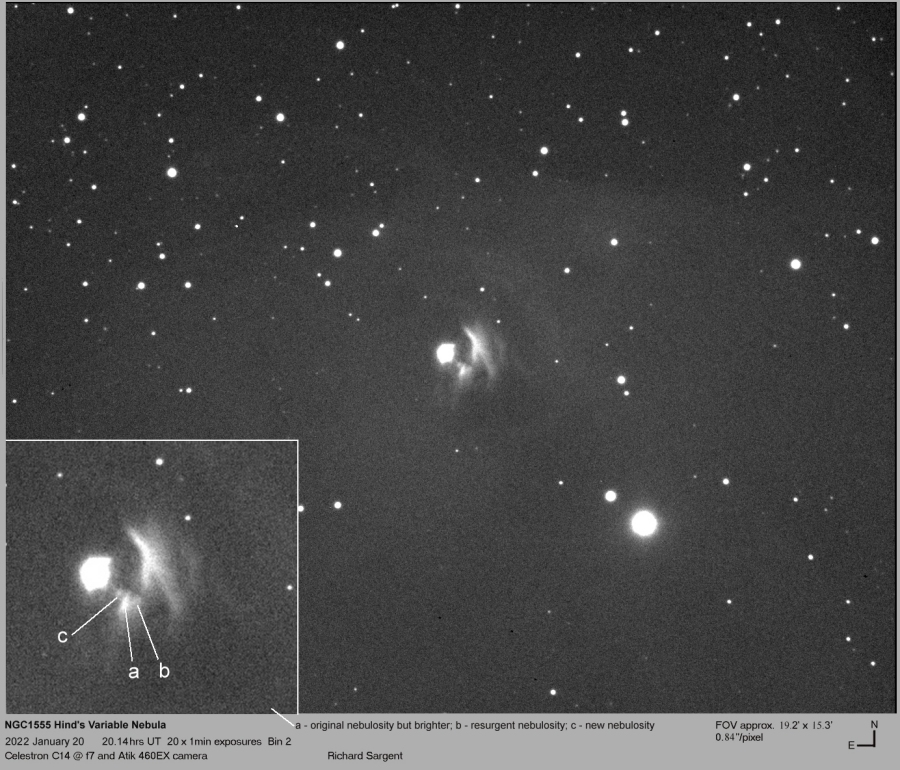 It is very interesting to see ‘rapid’ changes in NGC 1555 – Hind’s Variable Nebula. Richard Sargent has been monitoring it closely and you can see significant changes between images such as on January 20 and January 27. Grant Privett has also been observing. It would definitely be a good idea to keep on monitoring it over the next couple of months before it recedes into the west out of view. Observations appreciated.

As mentioned last time, the annual section meeting will again be a webinar rather than face-to-face on the afternoon of Saturday 5th March. Two speakers confirmed are Owen Brazell on “Observing Galaxy clusters in the Great Wall” and David Davies will give a talk based on that planned for the 2020 meeting, “Fumbling in the Dark: Exploring the Deep-sky through Imaging”. I am trying to find a professional astronomer to give the key-note talk but at this late stage it is proving difficult.

The January BAA Meeting which was held face-to-face in London and live-streamed included an excellent talk by Nick Hewitt on Variable Nebula – if you missed it or even want to watch again, it is available on the BAA YouTube channel at: https://www.youtube.com/watch?v=ME-vtmVsn2k

January’s Object of Interest was NGC 2022 – many thanks to all those who had a go at observing it. Observations received from Alan Thomas, David Shepherd, Graham Winstanley, Mike Harlow, Martin Cooke, Paul Leyland and Jim Latham. Mike Harlow was able to take a spectrum of the nebula using his objective prism, which is really interesting. It was nice to get a visual observation report from Jim Latham who noted it was easy with his 14 inch reflector, and that the unfiltered view was best with the OIII filter adding no detail.

February’s Target is another Planetary Nebula of which we have few recent images in the archives, namely Abell 21, the Medusa Nebula. It lies in southern Gemini, and its surface brightness of around magnitude 16 and diameter of around 10 arc-minutes conspire to make it a big challenge for the visual observer. Please send me your observations, or post on your Members’ Album.

There have been a great number of deep sky images posted to Members Albums in January – it seems to have been a good month for many. Too many really for me to name or show – please go and have a browse – if you just want to see the deep sky images, you can use the search function and pick “Deep sky objects”.

Hopefully February will be as productive as January, and I will wish you “Clear skies”.