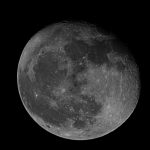 My interest in Astronomy began back in the very early 1970s. When every day, there was "Space" in the news. It would be Apollo or later on Skylab and then Pioneer 10 and 11 and the Viking missions and later Voyager. I watched Sir Patrick  Caldwell Moore and the Sky at Night. In those day's I was very lucky to be allowed to stay up late to watch the Sky at Night. But eventually, I was able to watch the repeats on BBC 2 on Saturday afternoons which was more convenient. In 1985 I can remember standing on a freezing cold lawn surrounded by snow with a little 60mm refractor looking for, and then seeing Comet Halley. The comet was very close to the Pleiades, Messier 45. I was hooked! I am now in my middle 50s and have a small shed/control room I call the "Whirlpool Observatory". I enjoy imaging Deep Sky Objects. And observing our star, the Sun (when the clouds part) with a DayStar Quark chromosphere and Sky-Watcher ST 102 F5/500mm Refractor. I have an Altair EDT 115 and Atik 428ex. I use this for deep sky imaging, and a Celestron C9.25. The C9.25 is for planetary and lunar observing and imaging. I have an IOptron Mini Tower Pro, which I use for mounting telescopes, for observing from darker skies, but also for Solar observing with the ST 102 and Quark. My main workhorse for CCD imaging is a Losmandy G11 with Gemini II goto I keep this on a permanent pier that is covered. I am currently the Observation Coordinator for. Macclesfield Astronomical Society.