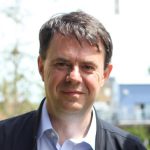 I have been a member of the BAA since the mid-1980s although I started observing some 10 years before and ever since.  I’ve specialised in solar observing using modest equipment: an 80mm refractor for white light observing, a Coronado PST for hydrogen alpha observing & imaging, an ETX 105 for white light imaging and a VLF receiver for flare detection.  White light observing consists mainly of daily disk drawings and subsequent analysis to derive, for example the butterfly diagram showing group latitude and size changes over the solar cycle. This analysis led to the creation of the free Helio software programs also used by many other observers.  The white light observations also contribute to the International Sunspot Number. I also enjoy observing other objects such as meteors including via an automatic camera, noctilucent clouds and occasionally the planets.  In recent years I’ve used remote telescopes for the imaging and measurement of asteroids, comets and variable stars. I’ve contributed to the BAA by giving solar talks especially at the Back to Basics workshops over the last 10 years, contributing the various sections, especially the solar section and writing Journal papers. I was the BAA Remote Telescope Coordinator from 2010 to 2016. I also coordinated the solar part of the Lunar & Solar Observers Workshop in September 2017. Recipient of the 2017 Steavenson Award for contributing to observational astronomy. In 2018 I became an Assistant Director of the BAA Solar Section. I’ve also been secretary for The Astronomer (TA) magazine, their solar sub-editor from 2004 as well as recently creating a new TA website.