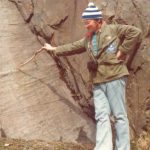 I first became interested in astronomy as a boy during the great 'space race era' in the 1960s, but was lured away from astronomy to geology! I joined the BAA in 1994, when personal circumstances allowed the purchase of an Orion SX200 Newtonian. Retirement in 2012 allowed me, finally, the time and resources to acquire an observatory (Pulsar dome) equipped with a Celestron CPC1100. I primarily use a range of cameras to image the Moon and planets, but I am started to get interested in globular clusters! I'm proud to say that, at the ripe age of 63, I was elected to FRAS in December 2018!