A blog of all posts for the 2022 Opposition 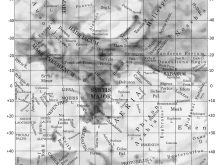 There is little to add to the previous post, except that signs of dust activity around the edge of the retreating SPC are abating.

Today, we are posting a set of hand-drawn maps by Makoto Adachi on the Maps page. These already appear at his Mars Section pages of the ALPO Japan Mars website. 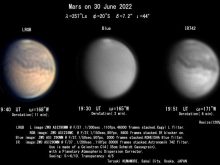 The number of observers continues to slowly increase, but temporal and longitudinal coverage by our team remain inadequate. An updated list of (32) observers is to be found below.

The regional storm reported on May 25 (announced by the Director on the BAA Forum the following day) lasted only a few days beyond the previous update.

The recessing SPC contains a number of seasonal rifts and bright patches. The rift near longitude 60 degrees has been observed.

Separation of Novus Mons (the ‘Mitchell Mountains’) has again occurred on time, as far as could be judged upon the small disk. Images by C.Foster (S.Africa) show it separated from June 2 onwards, when he caught it upon the (morning) limb: one of his results (June 26) is posted here. Separation is better judged at the terminator, but we had no observations of the (evening) terminator at the critical time. On June 29 J.Sussenbach (Netherlands) drew attention to the odd appearance of the W. end of Novus Mons, the latter feature being drawn out into a streak, suggestive of a banner cloud effect but probably showing dust-lifting, and this was also shown upon images from Japan (posted at the ALPO Japan website) a few days earlier. At a different longitude there has been clear evidence of dust activity near the cap: witness the late June images by T.Kumamori (Japan) which show a bright yellowish patch whose W. end is drawn out into a streak. Herewith images by Sussenbach (June 29), Kumamori (June 30) and J-J.Poupeau (July 8).

As I finish this note, an image by J.Willinghan (USA) shows the latter dust activity extending round to the longitude of Hellas. Another BAA Forum post was made today to draw the attention of observers to these polar dust storms.

A collection of images of the approaching planet (2022-March-May) by M.Lonsdale (Australia) is also posted this time. 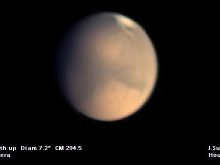 To date, 19 observers have contributed, and the planet’s diameter has now exceeded 6 arcseconds.

The SPC is subliming on schedule, with the usual seasonal rifts and dark patches. Around Ls = 239o Novus Mons will become fully detached from the cap by one such rift, but at the time of writing separation is not complete. There has been local dust activity over the SPC, as we have seen in several past perihelic oppositions. This activity has been followed by Foster, whose first sighting of a small distinct light orange patch close to the S. pole was on April 12. Later this specific bright area was replaced by a general orange tint over part of the cap, indicative of fallout, and the coloration has since disappeared.

Of the surface features, the Sinus Gomer has now been resolved. This and other markings seem to be identical to their appearance at opposition in 2020.

Hellas has again been the centre of dust activity. On April 29 there was no definite activity upon Maxson’s images. On April 30 Haigh (UK) and Cidadao (Portugal) caught a bright area in its NE corner, upon the morning side of the disk. The area expanded and brightened over the next few days, till at least May 7 on Cidadao’s images, while the basin was still light but static (indicating fallout) to Arakawa, Lonsdale and MacNeill (etc.) on May 13-18. There is evidence of other activity to the west, for Casely’s images of May 1 show what appears to be an E-W belt of dust in Chryse-Xanthe, and Lonsdale on May 2-5 shows it impinging upon the maria to the south with some dust diffusion and partial obscuration of Margaritifer Sinus. Adachi saw dust there visually on May 4.

As of today, May 25, fresh regional dust activity has begun over Chryse-Xanthe. This was first recorded by Cidadao on May 23, and its expansion was evident in his images the following day, when the event was confirmed by Haigh. It has looked extremely bright in red and infrared, and its expansion occurred to the south in typical fashion, affecting the central and eastern parts of Valles Marineris. It might expand further!

Those in bold sent observations; others are past contributors who post online.

A summary of what to look for this opposition is appearing in the 2022 April BAA Journal, which will be delivered in a few days.

Makoto Adachi has hand-drawn a remarkable new albedo map based upon recent spacecraft data, and has spent many hours adding the telescopic nomenclature by Ebisawa. In the course of helping to check the names on the map, he and I noticed that a very small number of his named features on the map do not appear in his published list of features, and vice versa. We shall publish this map online later, with his consent.

In February the Director had his wooden observatory dome damaged by fallen trees, and he asks if any BAA readers living locally would be in a position to offer any help with repairs? I have so far been unable to interest any local Northants repairer in the job. If you can help, or know somebody who could, please contact me! 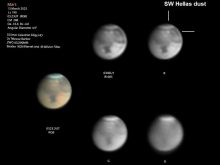 If COVID-19 was the global crisis that pervaded most of the 2020 apparition, then it is yet another that marks the start of the 2022 approach. Historically Mars was the God of war, and at the present time it is not a welcome reminder.

This blog would have been started earlier had it not been for the fact that the new BAA website was launched only during the current month, so that Directors were asked to put off page updates until now.

Mars will not be at opposition until 2022 December, but observations have already been arriving steadily since late last year. Three observers (Makoto Adachi, Clyde Foster and  Mark Lonsdale) have sent in work directly, the first observation being due to Adachi, and I have noticed that other previous contributors have been posting images online at the usual sites. I will be collecting their work throughout the apparition.

Here are some current points:

We need far more observers if seasonal and sporadic phenomena are to be properly documented. Good luck with your work this year.