This account, intended to describe the large regional dust storm, covers the period Sep 21 to Oct 3, and slightly overlaps in time with the period of the previous update. It is not intended to be a full account of the event.

On Sep 21 (Ls = 308 degrees) the Japanese observer S.Watanabe imaged a bright yellow local dust cloud in the vicinity of Chryse Planitia. A few days earlier, a band of white cloud elongated Np. to Sf. had been caught moving south from the N. polar region, and it would seem that this frontal system upon crossing Chryse had generated the dust. Not much happened for a few days, but a sudden expansion occurred on the evening of Sep 23 when bright dust had extended all along Vlles Marineris. This was imaged by D.Milika & P.Nicholas (Australia) and seen visually by M.Adachi (Japan). Next morning I at once issued an alert at the BAA Forum, followed by a few later updates, and some observers posted their images in response. I predicted that the event would be a large regional one, like that of 2020 November. The latter event had begun on 2020 Nov 11 at Ls = 313 degrees, and the two storms were rather similar both in seasonal timing and in development. (A full report on the 2020 opposition is waiting for space in the Journal and will appear in print next year. Meanwhile, you can view the 2020 opposition blog at this website.)

Further rapid expansion occurred on Sep 24. Long stretches of bright dust ran to the north into Chryse-Xanthe, to the east over Mare Erythraeum and to the south towards Argyre. A dusty overlying haze began to cover a very large region. On Sep 25 another very bright dust core appeared suddenly at Aram/Margaritifer Sinus, and dust then began to cover Sinus Sabaeus and Noachis, too. Another small core was seen next day in central Pandorae Fretum. Many spectacular images of the storm were taken.

Subsequent expansion was mostly towards the south and east, but on Sep 26 there was also a very bright fresh core centred slightly NE of Solis Lacus. By Sep 29 the cores looked paler, and the albedo markings over those longitudes appeared to be washed out.

Orographic clouds are a good indicator for the presence of atmospheric dust, because warming of the atmosphere ensues and prevents crystal clouds from forming. The evening cloud over Arsia Mons was last seen on Sep 25, although in the absence of the storm it should have remained seasonally active for a little longer. A good image by Bill Leatherbarrow on Sep 28 failed to show it.

By Sep 29 dust had reached the western side of Hellas, and on Oct 1 another bright cloud of dust was seen within Hellas, merging with the Noachis dust and forming a long belt of dust in the S. hemisphere. Depressiones Hellesponticae at the S. edge of this dust belt was suddenly darkened. Some dust reached slightly east of Hellas, and from Oct 1 the east end of the storm could be picked up in images from America, when it was caught right at the morning limb. However, by then the storm looked to be in decline.

Meanwhile, observers from the UK and Europe were able to get a look at the western end. Bill Leatherbarrow and John Saxton (UK) caught it as a large cloud over the SE limb on Sep 28 and 30, when the storm was dying on that side. But on Sep 30 John Sussenbach (Netherlands) caught a small new bright dust core at Gallinaria Silva, which in turn had diffused away by Oct 3. Such occasional activity is responsible for regenerating this little albedo feature.

The unusual thing about the 2022 storm has been the unusually large area of bright yellowish fallout south of Mare Erythraeum and including the region of the Argyre basin. At first sight it looks like a massive south polar hood. At the time of writing the markings in the affected longitudes are beginning to gain in contrast once again. Makoto Adachi, coordinator for ALPO Japan’s Mars Section, has uploaded daily maps of this storm at their website.

This is a preliminary survey only. As fallout clears we may well spot some more albedo changes. Images by Jamie Cooper and Peter Tickner on Oct 3 and drawings by Paul Abel (all UK) on Oct 1-2 already show that the Solis Lacus is apparently altered in shape. Look out for these changes, please! We still need more data, and very few images of the storm were received directly. If I have to download them from websites there will inevitably be delays in getting hold of them for analysis. 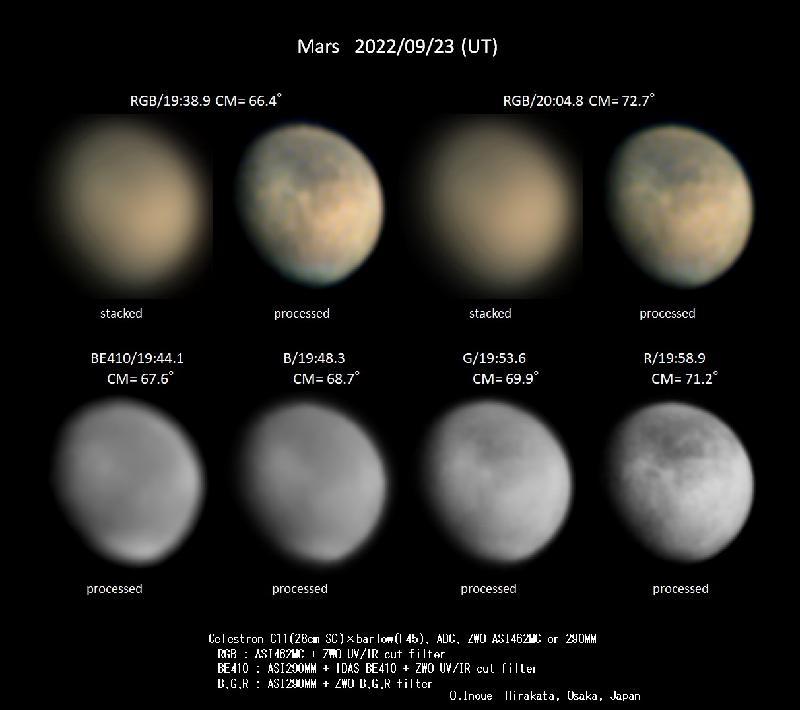 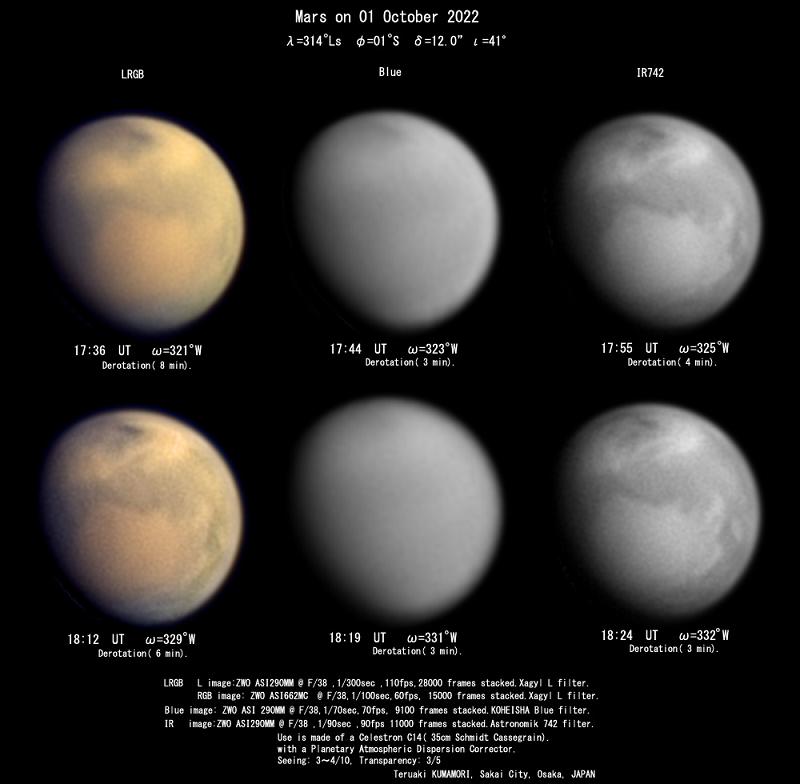 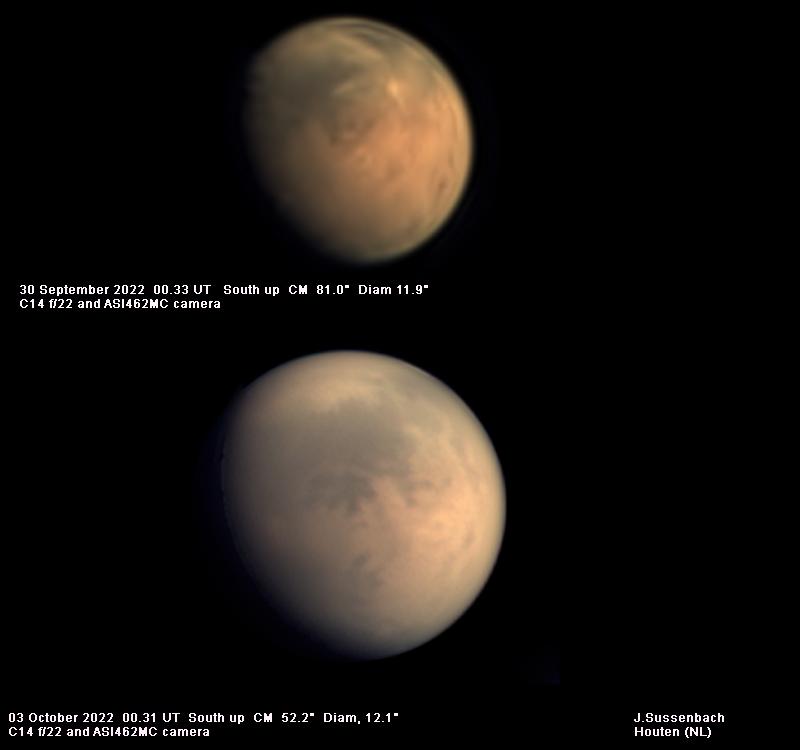 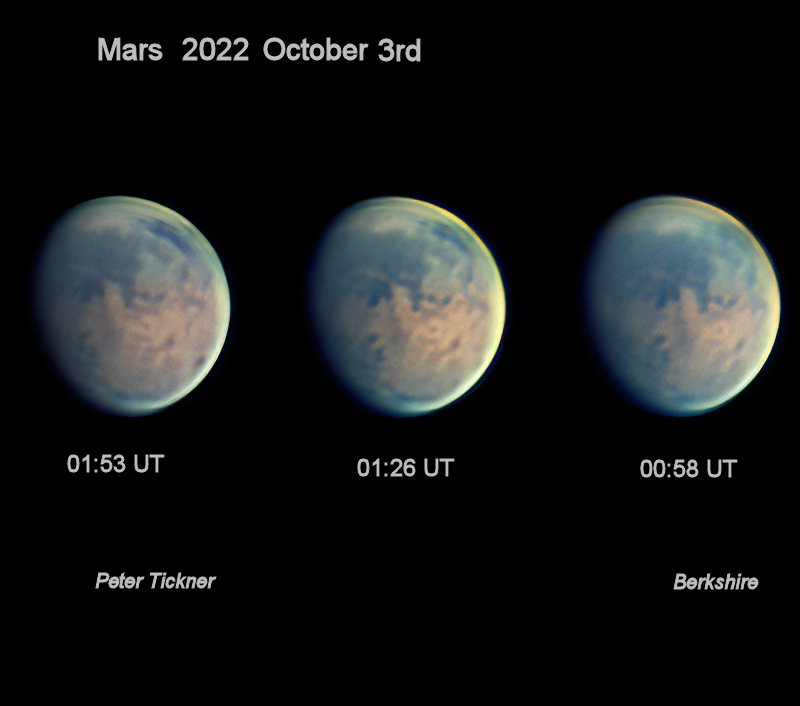 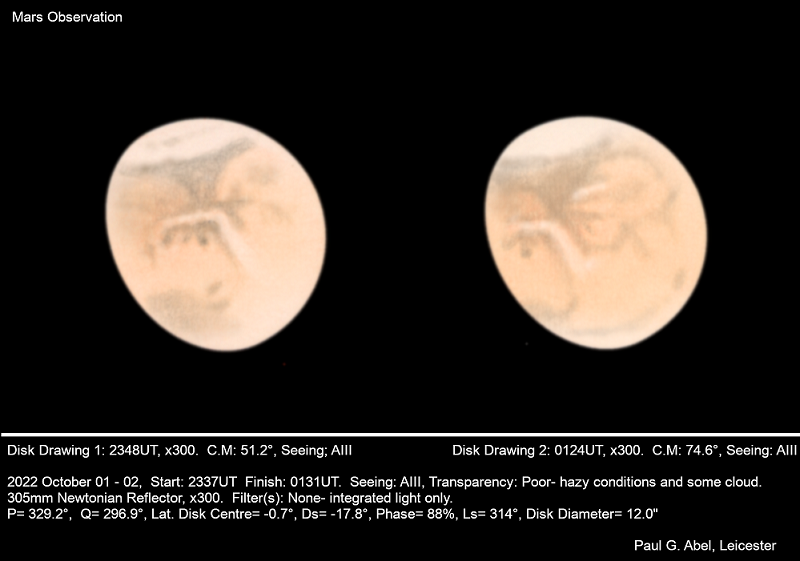